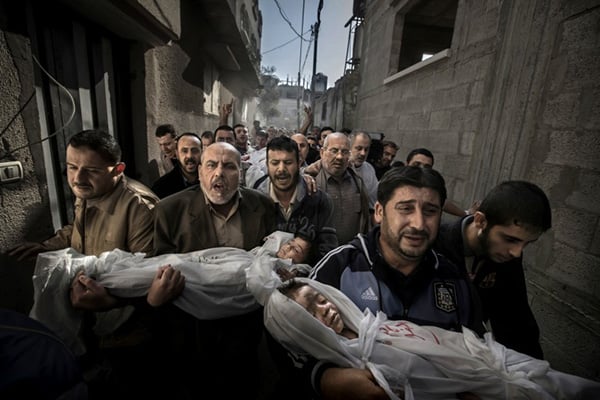 This is not a post about abortion or Planned Parenthood. This is a discussion about veracity and why it matters in photojournalism. In fact, about 3% of Planned Parenthood’s services are abortion-related. When Sen. Kyl was confronted with the facts, his office responded with “his remark was not intended to be a factual statement.”


The next two photos are the World Press Photo of the Year 2012. The top image is the submitted image that won, and the lower image is how it was first published. 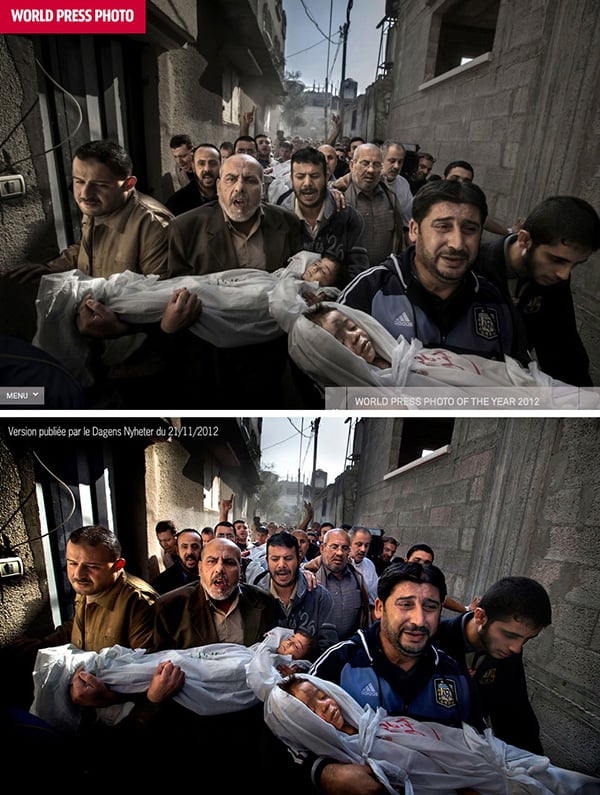 I previously wrote that the top image looks like an illustration to me, and I called for transparency in the photojournalism awards process by suggesting that RAWs be submitted so that we had a baseline from which to judge the degree of transformation.

The typical argument for allowing such manipulation is that this is no different than what was done in the darkroom. But to me this is an irrelevant argument. We don’t use darkrooms, nor film anymore. The techniques we developed in the darkroom were specific to that medium, and the output devices of the time. The “hand of god” dodging technique was developed alongside low resolution, black and white newspaper presses.

We now view images on Retina displays. We use Wacom tablets and Photoshop, which allows us to manipulate images in a more sophisticated fashion while doing it faster than ever. Filters and push button applications have given rise to “recipes” that allow us to cook images into the hyperreal.

(Stop with the Ansel Adams comments. We’re talking about photojournalism.)

I think Paul Hansen’s winning image is fantastic. I personally like the “original” better than the award winning image. But the more salient question is whether or not the original would have won. If the answer is “yes,” then why did the photographer feel the need to manipulate it for the awards? If the answer is “no,” then the judges need to examine what they are actually responding to in the image. The fact is that he felt that retoning the image was necessary and/or justified for the specific purpose of entering the contest. The image is on PEDs, and we forgot to set up drug testing.

But why does it matter? He didn’t move elements around in the photo, nor burn elements out of existence.

It matters because we are essentially saying as a society that reality isn’t real enough to garner our attention. That the photo wasn’t intended as a factual statement.

This isn’t a mere case of photography evolving from black and white to color, and me responding as a Luddite. I know what the world looks like when I step out the door, and it doesn’t look like some of the news images I’m seeing nowadays. And I am arguing that this is having an insidious effect on how we perceive reality. We can argue to we’re blue in the face about whether the manipulation has crossed some arbitrary line of taste and/or ethics, but by looking at both images, we cannot argue that it has been manipulated. We need to ask ourselves why.

When my friend’s teenage daughter tells me she needs botox and she’s fat, she’s responding to a world filled with photos of women not intended as factual statements. When Jon Kyl makes up numbers to advance his position and that non-fact becomes a rallying cry, we are accepting that facts shouldn’t get in the way of governance.

When an award-winning photojournalism photo has been toned to look like a movie poster, you are signaling to next year’s entrants that the bar has moved. Find the best retoucher you can, and heighten the drama as much as possible. We don’t care about factual statements. We care about visceral reaction and entertainment value. Make us feel something! Truth be damned. 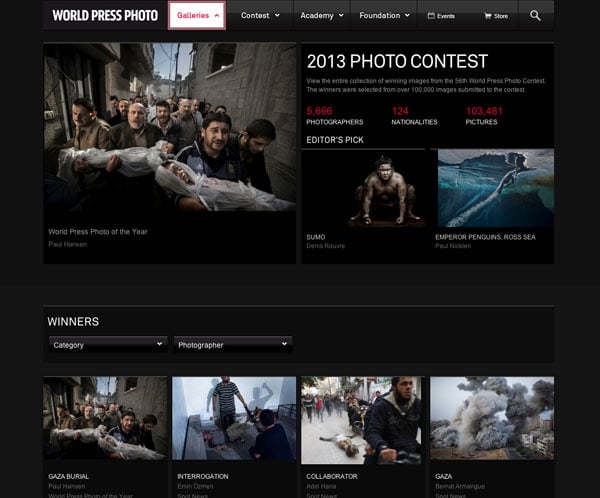 News has an ethical obligation to be truthful. Not truthy. Not in the spirit of the truth. Don’t give me the old tired line about photography just being an interpretation of reality and “what about flash photography?” This photo is manipulated to the point of being an illustration, and I’m asking us to find the fortitude to pull it back.

Create the guidelines that can inform a next generation of news photography that isn’t swayed by HDR and Photoshop – where the content, exposure and composition speak more about the efficacy of the photographer as a newsperson, rather than his/her ability to tone an image until we feel an emotion.

If photojournalists, their organizations, and their industry care about veracity, what is there to argue about when calling for the RAW when the truth is in question?