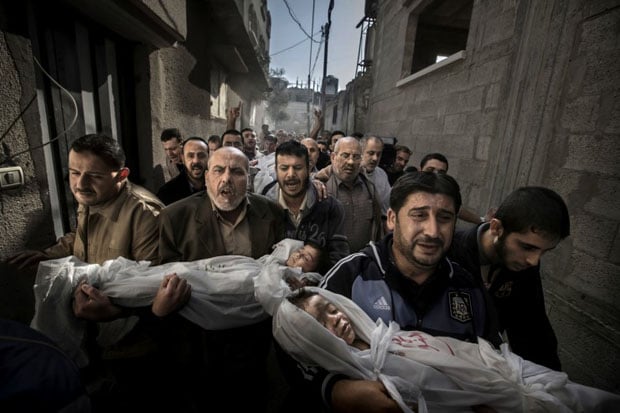 Dr. Neal Krawetz, a computer science PhD who specializes in non-classical computer forensics, online profiling, and computer security, made some pretty damning claims in a blog post recently. After taking a close look at Paul Hansen World Press Photo 2012 winner (seen above), he concluded that it was “a digital composite that was significantly reworked.”

While it’s true that the photo has been at the center of a debate over photo manipulation ethics since it was first announced as the winner, nobody has yet made a claim of this gravity. As proof, Krawetz offers a few specific (though, perhaps, not entirely convincing) points. 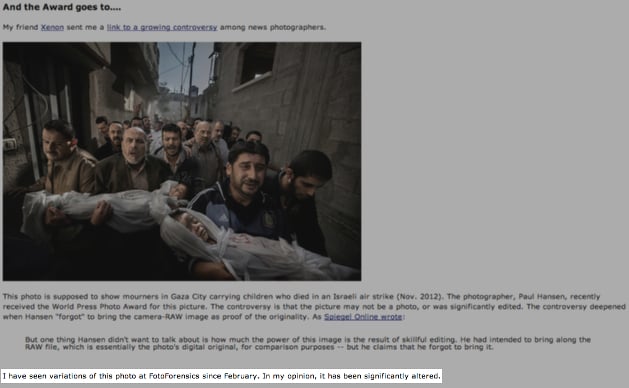 The issues are as follows: the image size is not native, indicating cropping or scaling; the lighting on the people’s faces doesn’t match the position of the sun; error level analysis shows that the people in the middle are “much brighter than the other people,” which is either due to splices or touch-ups; the XMP blog includes a save history that has several conversions on different dates (an indicator of splicing, according to Krawetz); and the photo was edited two weeks before the contest deadline, and again the day after the international jury concluded their meeting and announced the winner.

All this has led Krawetz to call the photo a composite and accuse the World Press Photo organization of ignoring acceptable journalism standards.

Paul Hansen, however, disagrees. Speaking with news.com.au, an exasperated Hansen defended his photo:

I have never had a photograph more thoroughly examined, by four experts and different photo-juries all over the world … In the post-process toning and balancing of the uneven light in the alleyway, I developed the raw file with different density to use the natural light instead of dodging and burning. In effect to recreate what the eye sees and get a larger dynamic range. To put it simply, it’s the same file – developed over itself – the same thing you did with negatives when you scanned them.

The World Press Photo Organization is siding with Hansen on this one, claiming that the photo was legitimate. However, “in order to curtail further speculation,” the organization is having two independent forensic experts investigate the photo so they can finally put this matter to bed once and for all. The results of that investigation will be released “as soon as they become available.”

Unbelievable [The Hacker Factor Blog via A Photo Editor]

Update: The results of the expert analysis are in, and it looks like Hansen’s photo does indeed stand up to serious forensic scrutiny. Here’s an excerpt from the World Press Photo article:

After examining the RAW file and the JPEG image entered in the competition, these are the experts’ conclusions:

‘We have reviewed the RAW image, as supplied by World Press Photo, and the resulting published JPEG image. It is clear that the published photo was retouched with respect to both global and local color and tone. Beyond this, however, we find no evidence of significant photo manipulation or compositing. Furthermore, the analysis purporting photo manipulation is deeply flawed, as described briefly below.’

1. XMP Analysis. The XMP analysis reflects an incomplete understanding of the Photoshop metadata and also paraphrases the contents in a misleading way. The referenced block of metadata merely indicates that the file was adjusted in the Adobe Photoshop Camera Raw module on multiple occasions before it was opened in Photoshop and then saved out as a JPEG. In fact, this metadata does not track whether multiple files were composited.

2. Error Level Analysis. The forensic analysis of the JPEG compression as performed by error level analysis (ELA) does not provide a quantitative or reliable analysis of photo manipulation. This analysis frequently mis-identifies authentic photos as altered and fails to identify altered images, and as such is not a reliable forensic tool.

3. Shadow Analysis. The shadow analysis is flawed in its logic and conclusions. It is true that linear constraints that connect points on an object with their corresponding points on the shadow should intersect at a single point (assuming the presence of a single light source). The location of this intersection point, however, cannot be used to reason about the elevation of the light in the scene. The intersection point is simply the projection of the light source into the image plane. This projected location can be anywhere in the image (including below the ground plane) depending on where the photographer is oriented relative to the sun.