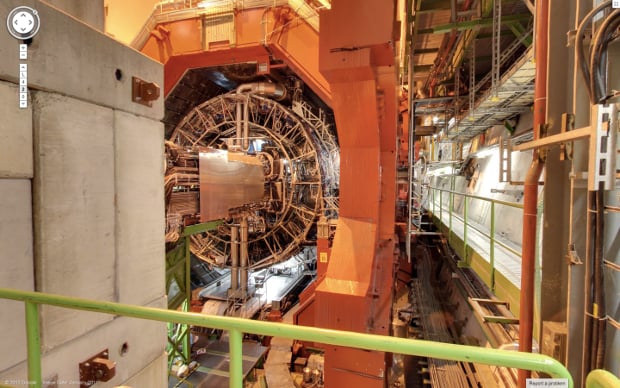 Few people without PhDs ever set foot inside CERN’s (The European Organization for Nuclear Research) lab in Geneva, Switzerland, home of the Large Hadron Collider. And although we have had the opportunity to share some stunning pics of the world’s largest particle accelerator before, Google is one-upping us (go figure) by letting you take a virtual stroll with Street View.

That’s right, we can now add CERN to the ever-growing list of awesome locations that Google is lets you tour from the comfort of your favorite chair.

When we shared The Atlantic‘s photos of the LHC, we pointed out the “beauty in the machine” that these photos captured. The Street View imagery is no different, except that now you can explore many more vantage points.

Acronyms like ATLAS, ALICE, CMS and LHC take on a new meaning when you get to see the massive underground machines with your own eyes. As you might imagine, it took some serious work to create a virtual tour of the world’s largest particle accelerator. The photos were all taken in 2011, and it took two weeks of shooting to capture everything they needed.

After that, it seems it took another two years to stitch all that data together, but we’ll forgive Google for dragging its feet if you do.

To learn more about the new addition, head over to the Google Europe Blog. Or, if you’d rather skip straight to touring the largest particle physics laboratory in the world for yourself, head over to Google Views and get browsing.