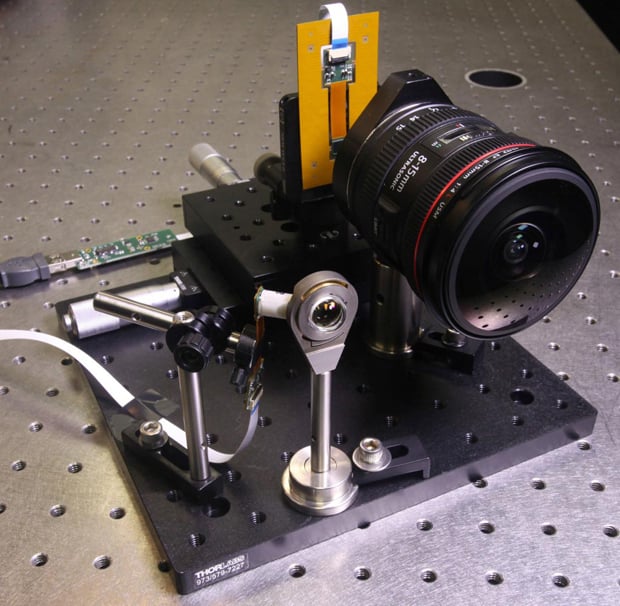 Researchers at the University of California-San Diego are fine-tuning some new tiny camera technology that could dramatically boost the detail and field of view of smartphone cameras. Joseph Ford, a professor in the university’s Jacob School of Engineering, describes the system in a paper to be presented next week at the Optical Society of America‘s annual meeting.

According to Ford, his team will soon have the system — seen above next to a Canon 5D Mark III setup — refined to a camera assembly with 85-megapixel resolution, 120-degree field of view and f/2 aperture, all in a package about the size of a walnut.

The system relies on a monocentric lens made of perfectly rounded, concentric glass shells. The shells are arranged so that they can produce wide-angle images with fine detail and without the distortions typical of fisheye lenses.

One of the major problems with using monocentric lenses for this purpose in the past was the inability to convey that highly detailed optical info to an electronic sensor. Ford’s team solved this by connecting the lens to the image sensor with fiber optic cables that are finely polished into a curve on one end — that way they perfectly align with the curved lens surface.

The research program is funded by the Defense Department’s DARPA arm and could lead to significant refinements in navigation of unmanned combat vehicles, Ford said. But the bigger commercial payoff could be smartphone cameras that produce images detailed enough to rival a DSLR.