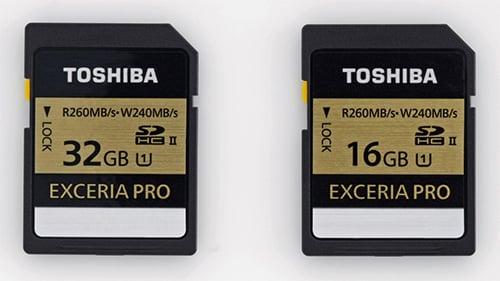 There hasn’t been a lot to report vis-à-vis of memory cards lately. With the exception of the occasional limited time price drop and creative idea (like the partitioned “Wise” CF Card from Amulet with its instant backup capabilities) the last few months have been somewhat silent.

Enter Toshiba and its new Exceria Pro series of SDHC cards that will offer “the world’s fastest data write speeds,” and we again have something to get excited about in the world of storage.

Toshiba actually announced plans for the Exceria Pro series back in January, but that announcement was entirely focused on CF cards. Those cards clocked read/write speeds of 160 and 150MB per second — nearly touching the max theoretical speed of 167MB per second offered by the UDMA 7 interface.

But these latest cards aren’t CF cards — they’re SD cards. And Toshiba is advertising blazing fast UHS-II high-speed standard read and write speeds of 260 and 240MB per second, respectively. The Pro cards will come in 16 and 32GB versions, offering the above-mentioned speeds, while the plain old Exceria SDXC cards will offer up to 64GB of storage in exchange for 120MB per second of write speed.

“While digital cameras have made huge strides in image quality and versatility, users have long wanted to see improvements in data transfer rates and write times,” explains Toshiba in the press release. “Looking to the future, Toshiba, a world leader in the NAND flash memory business, will continue to meet market demands by enhancing its line-up of UHS-II compliant SD memory cards.”

Toshiba hasn’t released any pricing info yet (mercifully) but the Pro and standard Exceria cards will both be released “worldwide,” with the Pro models making landfall first in Japan this October, one month ahead of the regular Exceria cards in November.

(via Toshiba via Engadget)