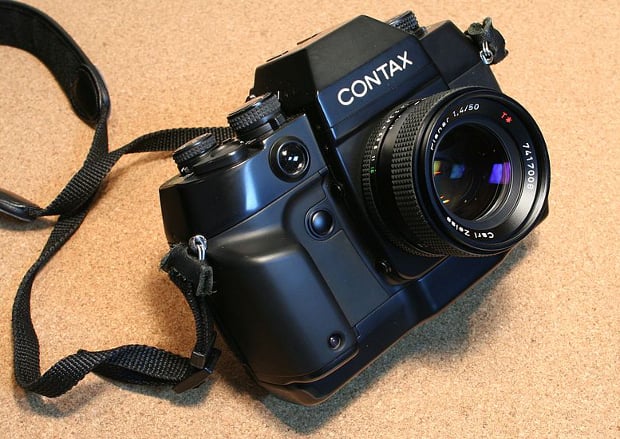 No doubt there are both Sony fans and detractors reading this right now. But if there’s one thing even the detractors can’t say about Sony at the moment, it’s that the company isn’t innovating.

Sony’s upcoming lens cameras (SmartShots?) are so out there CNET didn’t even believe they were real, the rumored full-frame NEX camera has the mirrorless crowd abuzz, and now, it seems the company has yet another “extraordinary” invention on the way.

Details are still extremely limited, but according to sonyalpharumors, Sony is planning to announce an e-mount camera with a moving sensor. That’s right, much like the Contax AX (pictured above) that allowed you to autofocus manual lenses by moving the film plane itself, the new camera is said to have a sensor that moves along the Z-axis (meaning towards and away from you).

Here’s a look at how the Contax AX worked:

The moving film plane in the Contax AX was meant for focusing purposes, with the added benefit of acting like a 10mm extension tube via a special Macro Mode. SAR’s sources claim that the sensor in the Sony camera will offer approximately 18mm of focus adjustment.

Additionally, SAR claims that the moving sensor will allow the camera to “fully support non-Sony lenses,” which should tempt Nikon and Canon owners who have a lot of Nikon and Canon glass sitting around to switch over. Obviously, you’d still need an adaptor in order to attach a Canon and Nikon lens to a Sony E-Mount camera.

As always, rumors are just rumors until the press release arrives, but SAR seems extremely confident that this camera is on the way (and soon). Keep checking back and we’ll be sure to keep you updated as more details emerge.

Brand Licensing and the Nikon Phone