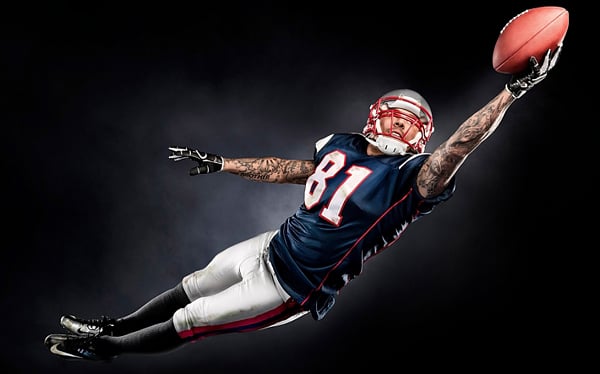 I have sat staring at the computer monitor for the last hour and words refused to appear on the screen. Even in times of stress I can write out a quick blog, but the current situation with Aaron Hernandez has proved tough.

It is important to me to be respectful of the man that was killed and the ongoing investigation, as well as tell about the photoshoot and the side of Aaron that I met on set. With that said, please read this as a story about a shoot and not the lobbying of an opinion over the current investigation.


When I recently photographed Aaron, it was in the midst of a crazy nonstop schedule of shoots that saw me become almost mechanical in my approach to shooting and interacting with people in general. I have found that in times of great stress and responsibility, becoming solely focused on the objective is the best way to maintain the quality of work needed for a large ad campaign production.

It just so happens that the day I was photographing Aaron, I was also photographing another NFL player, MLB player, professional Ironman and a professional runner. All of the athletes deserve a lot of respect and attention, but rarely do I talk about anything other than topical conversations with them as I need to still be professional and run the set.

I know it sounds cold, but I promise you that it works well and still makes for very fun shoots.

It is also an area where I believe many photographers lose focus around celebrities. They try to become buddies with the subject and forget that the purpose for their presence is to be photographed. As a rule of thumb for photographers, always get the shot, and if you want to get to know the person, get drinks afterwards, but work first.

So on to the photoshoot with Aaron… It was the day before Valentine’s Day and we were close to wrapping a nearly week long production, looking forward to a day off. Everything had been great, although one of the athletes had left me stressed out of my mind, so much so that I sent an assistant out to grab beer for everyone on set in the interim.

Not knowing much about Aaron, I figured he would be like many players and walk in with his crew and make his presence known. Then some guy shows up at the studio and starts chatting with one of the assistants, who then brings him to me and introduces himself, it was Aaron.

Now at this point, I wish I could say that myself and the creative director were not dressed in complete football uniforms (shoulder pads and all), but we were. Nonetheless, it made for a great laugh and a very fun icebreaker, not to mention a video of me doing the Harlem Shake that is still floating around the agency.

Back to Aaron, he was excited to be a part of the photoshoot and in a very calm way just asked for direction and he would make it happen. With his enthusiasm towards the shoot, the only thing we would need to do is to tell him not to smile during the action shots (and yes he accidentally did smile a couple times, they all do).

With everyone working together so well on set, it only took about ten minutes of the allotted two hours to get all the shots we needed. When a subject is grateful to be photographed, the shoots are usually very short as the photographer’s job is to get the image and not waste their time. Even with images being added on the fly, we still called a very early wrap on set and brought the beers back out to celebrate a shoot well done.

I talked with Aaron about his background, where he grew up and joked with him about other players in the league. He was kind and soft spoken, and laughed at my inability to play sports whatsoever. At the wrap party everyone talked about how much they wanted him to succeed and how grateful we were that he was one of the athletes in the campaign.

Fast forward to last week: I got an email from a friend with the story that Aaron’s house was visited by the police for an investigation into a murder. While shocked, I was still very skeptical and figured it was the tabloids at work. However, as time progressed to the point of his release from the Patriots and arrest, I knew that the situation was far more serious than I ever imagined.

To be honest, I am heartbroken about the whole situation. He was a subject that I had great hopes for, even though I have never even seen him play. A good guy to everyone on set, from assistants to clients, he was approachable and not protected by ego.

Which brings me to the hard and sobering reality, what do the images above mean? Lost are the possibilities that they will represent a man in his prime, going into his best season as a Patriot. All the potential that existed has converged like the dark clouds over head for Aaron.

Do they represent a monster that once dawned a uniform that many aspired to wear in a life envied by the masses, that served only to shroud a misguided man? To me they will exist on a separate plain, one that is relevant only to the beholder.

The images are and will always be, Aaron Hernandez, the guy that treated my friends and I kindly on set. Minimally significant in the grander picture of life, but humbling judgement on what life could be. 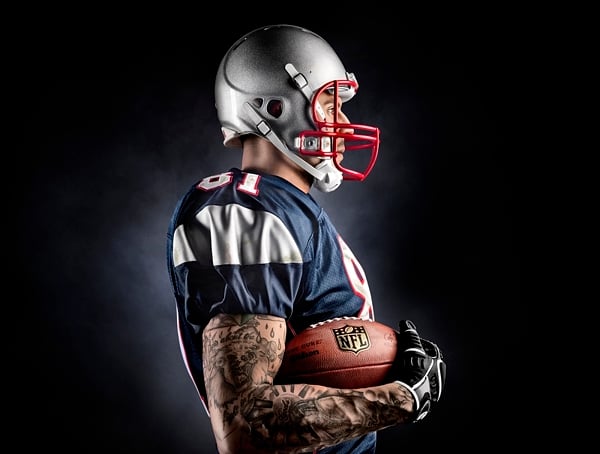 About the author: Blair Bunting is a commercial photographer based in Phoenix, Arizona. Visit his website here and his blog here. This article originally appeared here.