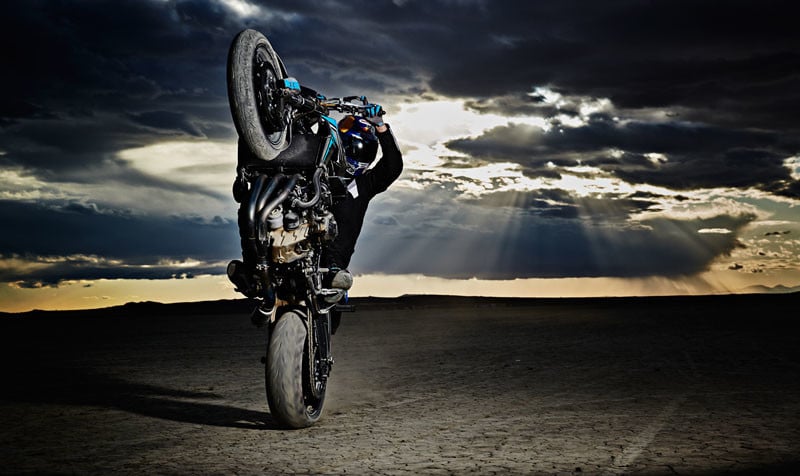 Motorcycle stunt riding is seen as a reckless sport in so many circles. This kind of riding is usually left to YouTube channels filled with guys with helmet mohawks and seriously questionable decision-making skills. Because of this, I often find myself presented with the question: how can this kind of riding be fun? The typical response is: “you’d have to ride to understand.”

As a photographer this caused my mind to wander. I started to ask myself if it was possible to show stunt riding in a way that anyone outside of this small circles could embrace. My opportunity came when I was showing off some new work at the Red Bull office in Los Angeles recently.

I’ve worked with Red Bull on countless projects over the past few years but never in the world of stunt riding. I asked if there were any riders in the area that they sponsored and the answer came in the form of one name: Aaron Colton. 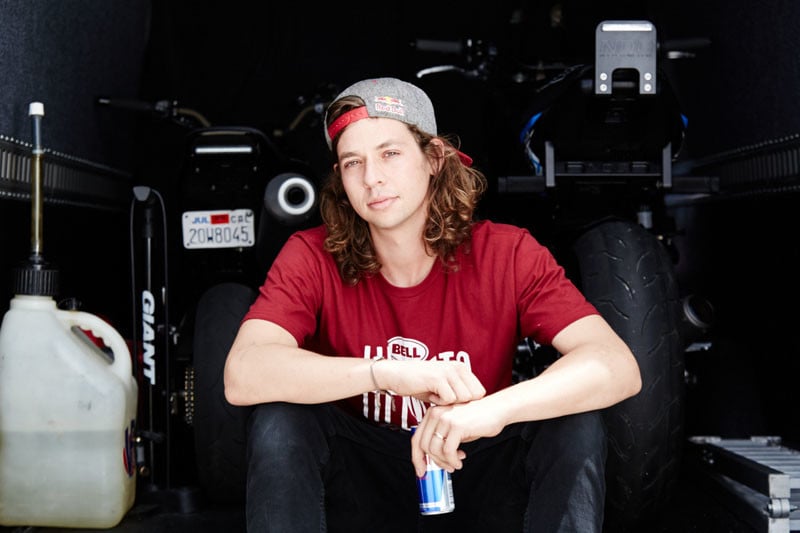 Aaron was great to work with because he was into collaborating on new ideas and projects that had the potential to transcend the traditional image of the motorcycle industry. On top of that, his skill level exceeded my imagination so this project was really about creating shots that could display his talents and maintain artistic quality about them. 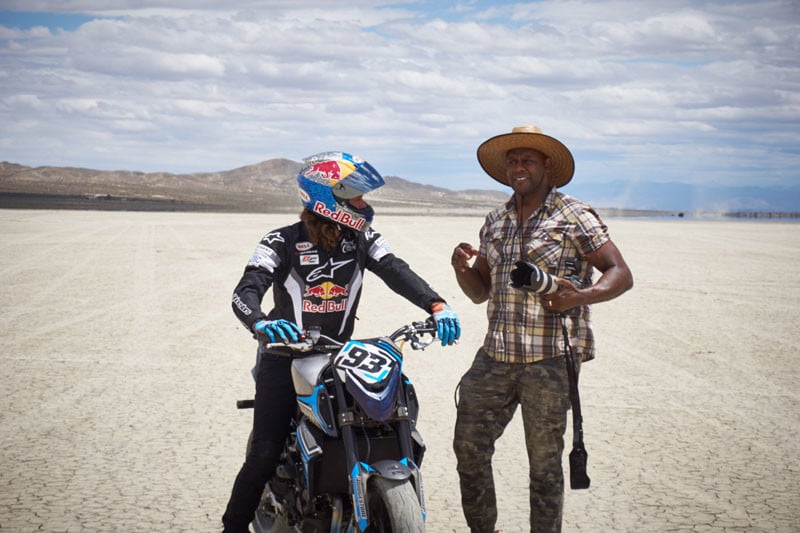 Immediately, I envisioned images of Aaron being eclipsed by or bursting through clouds of backlit smoke. While these would have been easy to create in Photoshop, I wanted to use practical and physical effects because I prefer to be out taking photographs and solving technical challenges rather than sitting at a computer. Using practical effects also leaves some room for the unpredictability of the ‘Chaos Theory.’

As much as I like to plan specific images, I also like I to try to put a bunch of good things together and leave some room for random occurrences. It’s those end-of-the-shoot experiments that often yield the best shots.

Which leads to the sunset images. 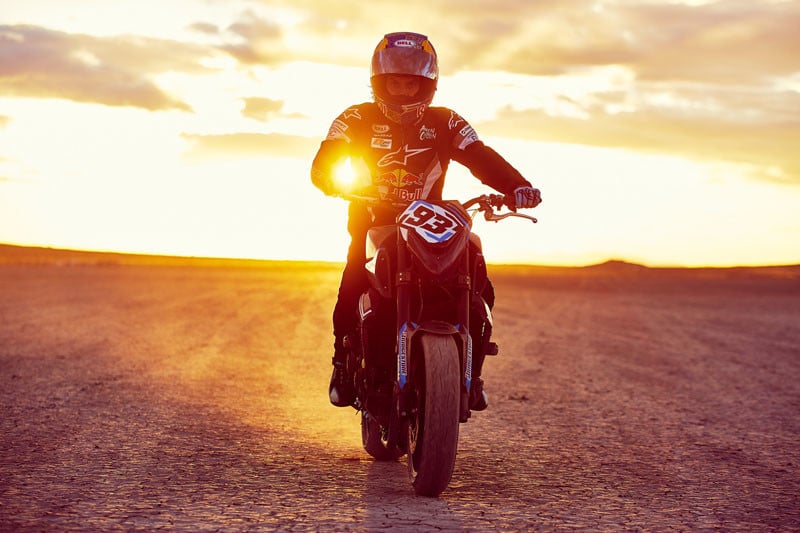 They weren’t planned at all.

I typically shy away from sunsets when shooting motorcycle images and that’s mostly because every motorcycle advertisement on the planet features a sunset and a winding strip of asphalt. The whole idea of this shoot was to do something new and avoid clichés but when Aaron Colton says he wants to do a stand-up wheelie through a blazing ball of fire, exceptions must be made.

Red Bull left most of the art direction up to me but they did request a few clean images they could use for branding purposes. I tried to put bit of a unique spin on the “stock” shots by searching for weird angles or looking for unique details that are often and otherwise disregarded as out of context. Shooting from above for Aaron’s no-footed wheelies, tracking from behind to emphasize his no-handed wheelies or zooming in tight to show his style are all examples of this. I spent a lot of time researching Aaron’s routines to make sure we weren’t treading on old ground and that research paid off. 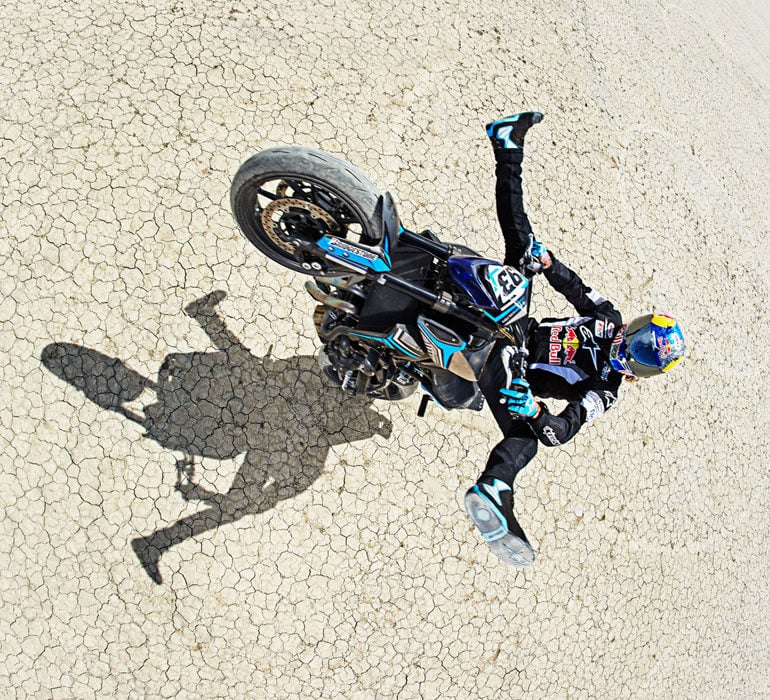 Here’s a technical look at how a few of the shots came about:

Shot 1: Back Wheel and Fire in the Sky 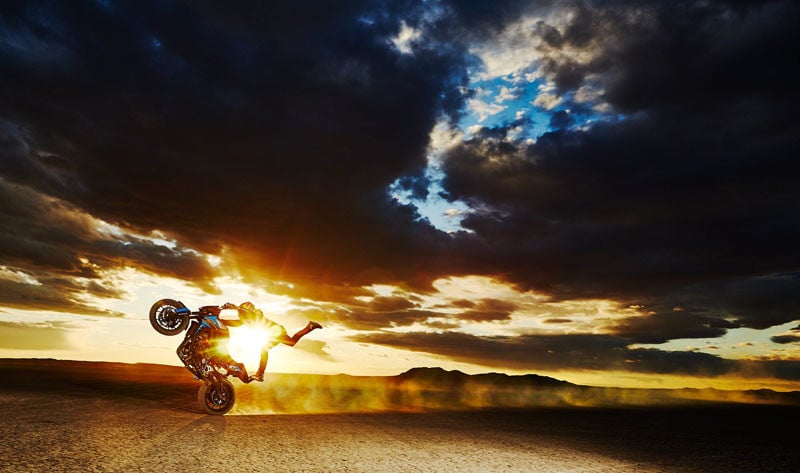 This was a totally unexpected photo because Aaron and I were mainly focused on capturing smoke bomb images illuminated with flashes at night. We had just started to take a break after getting the stock shots and we were waiting for the light to dim when the sunset erupted through the clouds. Aaron and I both saw the opportunity to get some special and said “let’s do this.”

There are over five million results for “sunset wheelie motorcycle photo” in Google, so we knew it was going to be a challenge to come up with something new on the fly.

Aaron had been doing stand-up wheelies earlier in the day that reminded me of the iconic Air Jordan Pose, so I asked if he could another one. I positioned the Profoto B1 with P 50 (Magnum) reflector perpendicular to Aaron and shot a test frame. People rave about the TTL features of the B1, but I prefer to use it in manual mode because without compensation the TTL tends to overcome the backlit effect and even out the exposure. With a Sky Port you can control the power on the fly from the camera and this allows you to retain the backlight with as much fill as you choose.

We were able to nail the shot in two tries. The first is an outtake I posted on my Instagram account @upforadventuress and the second is the frame that was selected for Red Bull’s Instagram account.

Shot 2: Clicking with the Heel Clicker 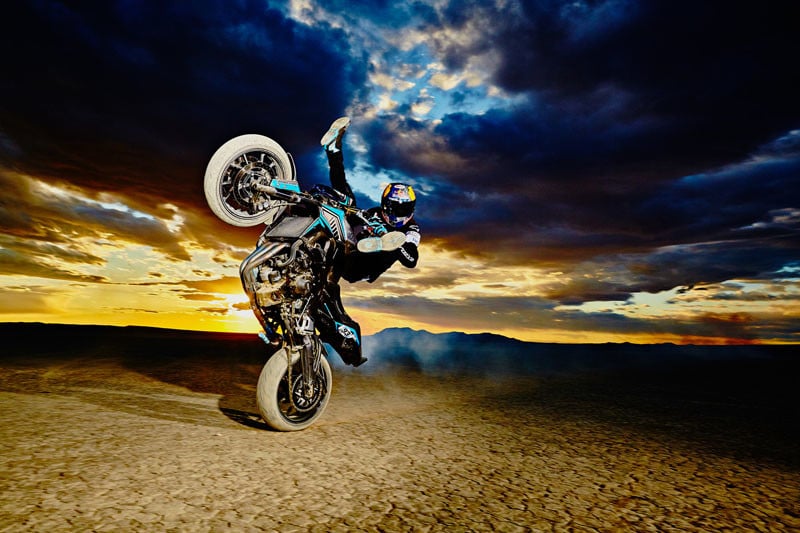 This photo was a challenge and I wouldn’t recommend trying it. After I posted the shot online, people commented and presumed it was a drone photo—it’s not. To get the right angle I had to stand on a ladder with a monopod and use a remote to trigger a camera and an off-camera flash.

Before the shoot I watched several videos of Aaron’s riding to get a feel for his routines and his tricks. This trick stood out but I wanted to portray it from a perspective that really shows his extension.

With a little creative rigging you can use a Pocket Wizard to remote trigger your camera setup and use an Air Remote to fire an off-camera profoto B1 strobe. It takes some good luck and patience to get the right shot—and with a little bad luck you can end up with a motorcycles on top of you and a ton of expensive camera gear ruined.
Working with an extremely skilled rider like Aaron makes all the difference. You can work with a skilled rider to get them to creep in closer and closer to the ladder without fear of getting knocked or run over. I have to trust the rider to get a great shot and the rider has to trust that I won’t drop a camera on his head while he’s riding underneath me—in the end, trust is everything. 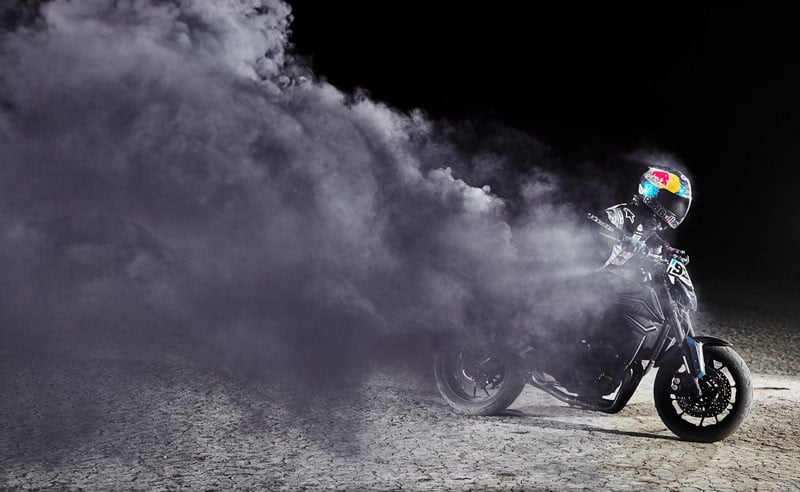 Before the wheelies and the heel clickers, smoke photos were the primary goal of this photoshoot. I wanted to create dramatic shots of Aaron emerging from the smoke on his bike, and I wanted to use strobes to do it. Most of the photos used a three-light setup. One strobe lit the smoke (a B1 P50), a rim or fill light (B1 Beauty dish) brought out the shape of the bike, and a key light (B1 zoom reflector) was specifically positioned to highlight Aaron’s head against the smoke. The key light was positioned last, and you might wonder why, here’s the answer: there are things you can’t control – like the wind. 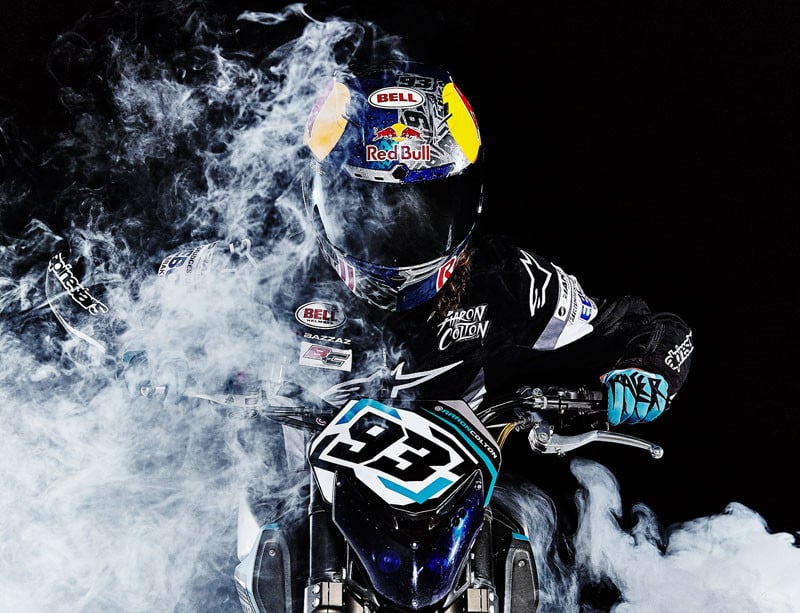 Earlier during our shoot, the weather was stifling hot and without a breeze but as soon as the evening rolled in, the wind was like the Wizard of Oz—it shifted direction quickly and without warning. I had to position and reposition the key at the last moment and then shoot to match the direction of the wind chose, otherwise I would be out of position of my flashes and the smoke. 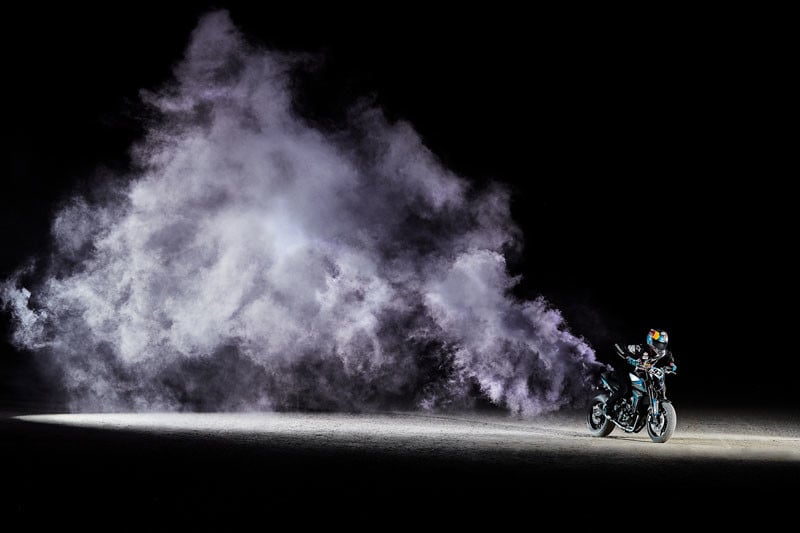 For several frames, I had to light smoke directly under Aaron and have him hold his breath because there were simply no other options. Sometimes I would have less than five seconds and other times less than 30 seconds to get my photos, so I would just fire away until the wind blew the smoke out of frame. Initially I’d hope to be able to finesse the light and the elements more to get more precise images but eventually I accepted that you have to accept what you’re given sometimes—you can’t fight Mother Nature. The process was chaotic and hilarious, and it created some beautiful moments and unexpected images.

Initially, Red Bull had some concerns about using a “portrait” photographer on a moto shoot. Being a portrait and lifestyle photographer was considered a weakness but I emphasized that this so-called weakness was actually a strength. I was coming at the shoot from a different and valuable perspective.

Unlike an action photographer, I didn’t want to reinforce the myopic view of creating images just for the moto crowd—they already loved motorcycles—the idea of this project was to show off the power and beauty of skilled riding in new place and appeal to fresh eyes. Maybe we could even catch the attention of an overprotective mother and, rather than disown her kids at the first mention of a motorcycle, she would see something more in riding than just danger. 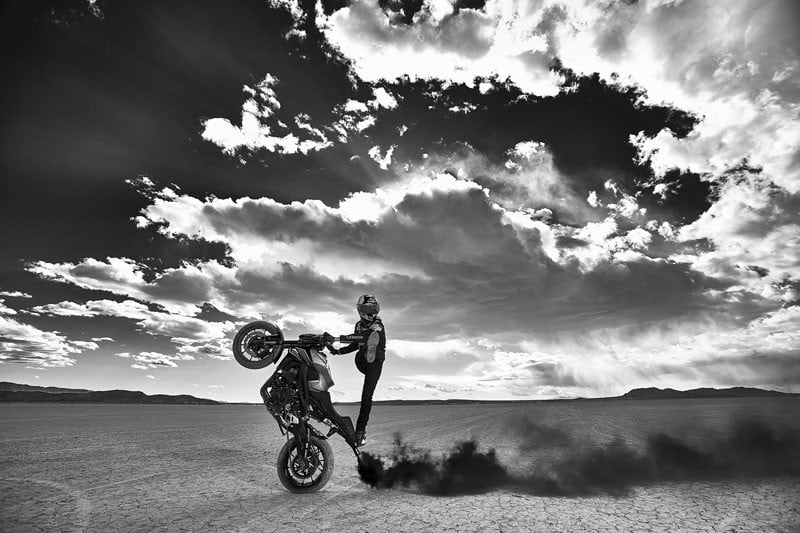 Marketers love to throw around phrases and buzzwords like “going viral” and “trending” like they could happen at any moment. The reality is that this might happen to something you create but more than likely, it never will. When I posted an outtake of this photoshoot online, it resonated with people immediately—to the tune of just over a million unpaid impressions on Facebook.

It wasn’t long after that initial post that Red Bull took that momentum and carried it through to their own audience. The outtake was distributed internationally through their channels and before the end of the day, the photo had reached millions more. 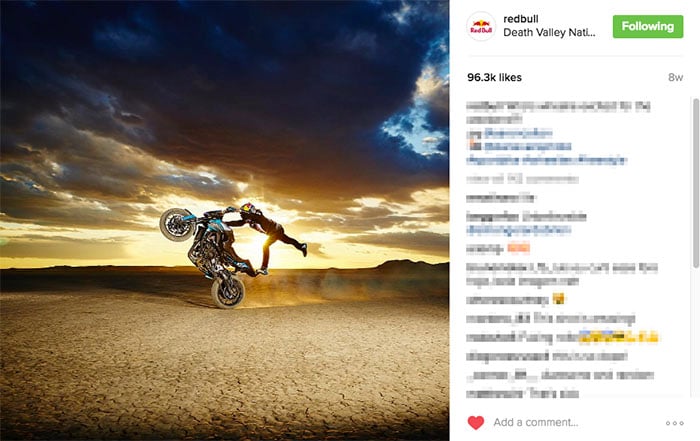 The best part? My focus was never to reach millions, it was simply to channel my love for riding and photography and present both in a new and exciting way that would resonate with others too.

Patent Shows what Canon’s Digital Lens Displays May Look Like