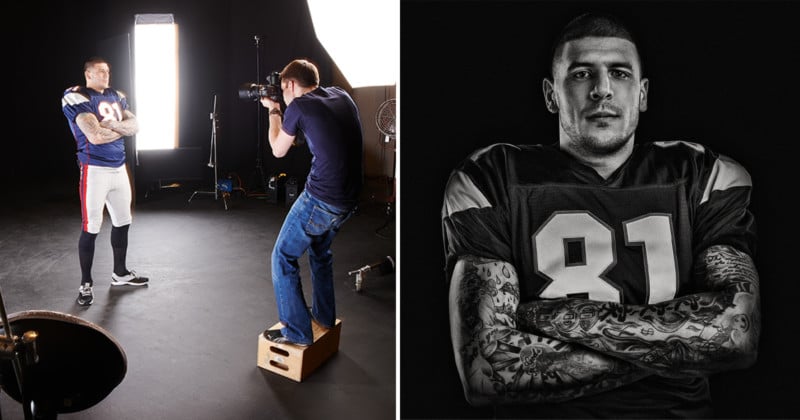 I am writing this after getting a torrent of texts from friends and family who have been watching the documentary Killer Inside: The Mind of Aaron Hernandez on Netflix. It turns out I’m in it… an image of me on set with Aaron appears in the second episode.

My first reaction was a bit of anger as I never licensed any images from that shoot (hey Netflix, call me maybe), but as that passed it eventually got me thinking about the day I spent on set with Aaron… the same day he shot someone.

Diving into the mind of another man is enough to make one lose his own. My photoshoot with Aaron Hernandez left me questioning what lies behind the eyes of the subjects who stand before my camera.

My many years of photographing celebrities have led to great experiences and friendships, but this one photoshoot made me question my own mental depth and acuity when it came to the very people that I work so hard to learn about, only to exist until the last shutter closes. The photoshoot with Aaron took place on the final day of a week-long campaign that I was shooting for a sports client. We had professional athletes from the NBA, MLB and NFL in the studio all day. For me I wanted nothing more than to keep up the quality of the lighting on set through the final athlete, wrap, and then take my wife to Hawaii—the next day was Valentine’s Day.

It had been a long production: through pre-pro meetings, lighting days, scouting and client dinners, mentally I was exhausted and internally I was begging for relief from the pressure that I enjoy so much.

When Aaron Hernandez first entered the studio, I was wearing the jersey and shoulder pads of Clay Matthews (the athlete that preceded Aaron), a Chicago Cubs batting helmet, and drinking a Stella Artois. Perhaps understanding the light-heartedness that I carry on set, he immediately smiled and started laughing. I introduced myself, shook his hand and we started talking pleasantries: how’s the weather, what’s your new house like, how has your day been?

The final question and answer haunt me to this day….

“Good,” he replied, along with a calm, childlike smile.

Hours earlier, he had shot a man in the head. 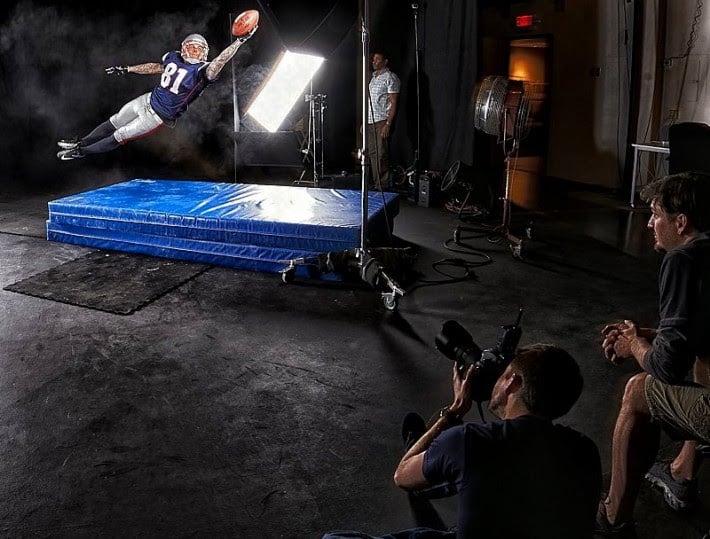 As I sit here typing this years later, I still have to pause for a moment in order to digest the gravity of the situation. Having gone through mental health struggles in the past, the idea of not knowing the mind behind one’s eyes is familiar to me, but the level to which Aaron was able to keep it hidden still frightens me to this day.

Upon hearing the news, the people on my crew that day were in shock and disbelief that such a sweet kid could have done such a horrible thing, but as time went on and the details became clearer, we accepted it despite the confusion.

In an odd way, it left me with a dilemma: how do I describe Aaron Hernandez?

I can only describe him with lights and a camera—the truth that existed within him will never play out on set.

As portrait photographers, we are challenged to expose the true nature of the person that stands in front of our camera: be it angry, shy, calm, or intense. However, photographing Aaron Hernandez has taught me a lot about my approach, what I thought existed within the frame lines, and what a camera can never truly capture.

Often times photographers are celebrated for a reaction or expression they’re able to draw out of their subjects (think of Karsh’s iconic image of Winston Churchill). It’s a romantic notion that the photographer is a sort of snake charmer, the subject a willingly controlled entity—together, they make up an act that ends in a great image.

I feel this approach sells the celebrity or model short; a successful photo shoot is the result of the collaborative effort of everyone on set, subject (obviously) included.

What Aaron Hernandez taught me is that all the lights in the world could not illuminate the darkness that lived within his mind.

While he and I worked together very well to get the images that the client wanted, we were merely playing the roles that were asked of us, in a dance that benefits the choreographer more than the dancer. It’s a part of this career where form and light matter more than discovery and truth, where we are not trying to learn anything about the athlete, but rather speak through them for the client’s cause.

On set, if I feel like the shoot has gone well and the images are in the bag, I will sometimes offer my subjects the option to shoot a few frames for fun. Aaron was game, he had seen an image in my portfolio of a football player holing a ball in a profile stance and wanted to have one like it for himself.

We drew the lights and smoke machine and created this image of him in a calm, subtle, almost stoic stance. He was excited about how the pose showed off his tattoos, which seemed to mean a lot to him. I knew that turning an action light set into an impromptu portrait session wouldn’t be as dynamic a shot as I wanted, but when I got home and looked through the files, it wasn’t the lighting that disturbed me, it was his eyes.

The images we created on set that day were packed with intense expression and focus… the portrait that he asked for was absent of this. It was absent of emotion, of life, almost as if the personality of the young kid with the smiles and laughs had left and what remained was cold and unfeeling. Maybe this was a result of him being tired, or the difference of direction. But part of me wonders what he was thinking about as the huge light source in front of him popped at full power, probably blinding him, as I could barely see after setting up the softboxes.

We will never know.

Before breaking down set, Aaron asked me about one more shot. I pitched him a few crazy action scenarios (after all, it was the style of set we had that day), but what he wanted was a straight to camera portrait… without his helmet on.

This was the last frame I shot that day, and the last shot of him before the world learned of his dark secret. 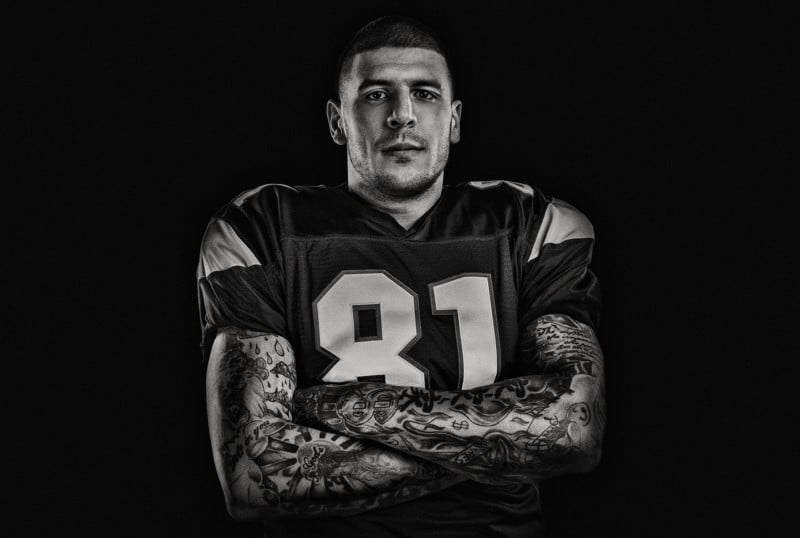 I have never shown this image to anybody. Until today, I had chosen not to talk about the situation for many years. But with the recent release of the Netflix documentary about Aaron, and my unsolicited cameo, I found myself watching and wondering what could have been. Hoping, more than anything, that his tragic fall from grace could save someone in his shoes.

About the author: Blair Bunting is an advertising photographer based in Phoenix, Arizona. You can see more of his work on his website, blog, Facebook, and Instagram. This article was also published here.