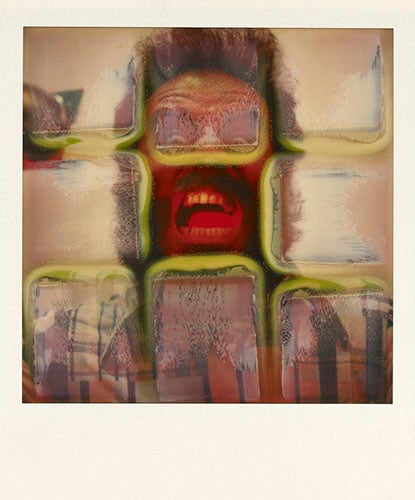 “I don’t know what the hell I’m going to do,” Chuck Close told an NPR interviewer when Polaroid stopped making instant film in 2008. He wasn’t the only artist attached to the medium.

Enlisted as a consultant by Polaroid founder Edwin Land in 1948, Ansel Adams believed the emulsion had “truly superior quality,” as he said in his autobiography. Andy Warhol never went out clubbing without his plastic Big Shot. Lucas Samaras never had to leave his studio once he had an all-in-one system to take selfies day and night. And David Hockney used his SX-70 to reinvent Cubism.

Practically from the day it went on the market, the Polaroid was an icon of instant gratification, perhaps the most perfect embodiment of snapshot populism since Kodak invented the Brownie.

An absorbing exhibition at Vassar’s Frances Lehman Loeb Art Center – featuring the work of thirty-nine artists who extensively used Polaroid – shows that convenience was just one of many merits. And a recent book by Christopher Bonanos, Instant: The Story of Polaroid, helps to fill in the picture.

Each of the artists who embraced Polaroid saw different qualities in the system, some completely unintended by the manufacturer. Using Polaroids as the basis for his photorealist paintings, Close valued the continuous tones produced by the wet chemistry.

Samaras was drawn to the chemistry in its own right, scraping and smearing the viscous emulsion to make photography painterly. Hockney appreciated the ability to watch his Cubist photomontages develop – both literally and figuratively – as he shot and shuffled multiframe landscapes. As for Warhol, the attraction of the Polaroid was conceptual: Any picture the camera shot was inherently Pop.

Though Land wasn’t creatively involved in any of these bodies of work, he did supply free film to the artists he considered most innovative, and solicited their advice on Polaroid products, recognizing that their imagination could be as valuable to his company as advances in mechanical or chemical engineering.

Artists’ intense attachment to the Polaroid camera is totally understandable. In a sense they co-invented it.

10 Things an Art Director Looks for in a Photographer