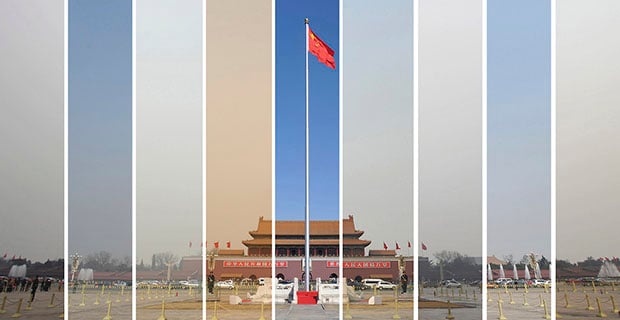 A neat way to capture the passage of time is to photograph one scene multiple times throughout a day, slice up the resulting photos, and then combine them into a single composite image showing all the different hours as slices. In the past we’ve shown examples of this technique done in cities and with sunsets.

Chinese photographer Wei Yao of Reuters used this same concept, but instead of shooting photos over a number of hours, his image spans days. Instead of focusing on the passage of time, his image highlights Beijing’s serious pollution problem.

Wei shot the photographs while covering China’s National People’s Congress earlier this month. He set his camera up at the same location in Tiananmen Square between March 7-14, with the Gate of Heavenly Peace (AKA Tiananmen) and the flagpole squarely in the center of the frame.

In the end, Wei managed to capture 9 different photographs of different air qualities in between his assignments. His camera wasn’t in the exact same position for each of the shots (due to the fact that he was constantly in a rush), but he managed to make all the pieces fit together nicely during post-processing.

Once he completed his time-slice photo, Wei uploaded it to Weibo (i.e. China’s Twitter) and saw it instantly go viral with more than 25,000 shares. Check out this larger version posted by Reuters if you’d like to take a closer look at this image.

The sky of Beijing [Reuters Blog]

Image credits: Photographs by Wei Yao/Reuters and used with permission

Modding a Vintage Camera for Digital Use