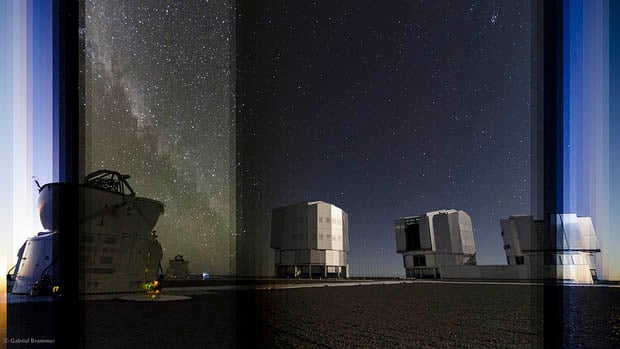 Inspired by photographer Richard Silver’s time-slice photos that we featured last month, European Southern Observatory Fellow Gabriel Brammer decided to do the same thing, except with photographs of the ESO’s Very Large Telescope in northern Chile instead of NYC buildings.

The photographs Brammer obtained were part of a time-lapse project that snapped one photo every 6 minutes using a Nikon D7000 and a Tokina 11-16mm lens at f/2.8.

First, check out the time-slice video that Brammer made:

Now here’s an explanation of what you’re seeing: each frame in the video above is a composite of 30 of the time-lapse exposures. Since the slices were all taken 6 minutes apart, the 30 slices in each frame span 3 hours of the day.

The dark sky and Milky Way are visible at the beginning of the night. The last-quarter moon rises about half way through the night, illuminating the telescope platform, and is seen setting in the last few exposures after sunrise.

The photograph up at the top is a single composite image showing all the sliced up photos captured through the night (you can find a high-res version here).

Image credit: Photograph and video by Gabriel Brammer and used with permission