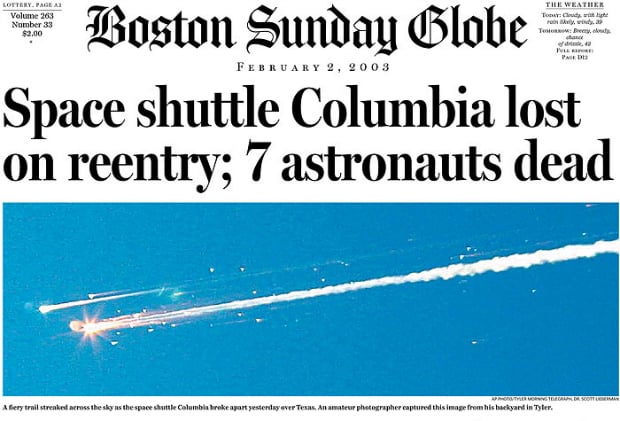 Two days ago marked the 10th anniversary of the Space Shuttle Columbia disaster, in which 7 astronauts lost their lives during reentry as the rest of us watched horror-struck from the ground. The following day, newspapers the world over were announcing the tragic news, all of them using the same photo taken, not by a prolific AP photographer, but a cardiologist and his 6.3MP Canon D60.

At the time, Dr. Scott Lieberman had to order the camera special from Canada (as he couldn’t find one in the US), paying the hefty sum of $2,200. In an interesting article on Poynter, Lieberman discusses that fateful picture and the freelance photography career it has led to.

The photo, however, seems to have had a much broader impact than just launching Lieberman’s freelance career:

In addition to validating digital photography as a newsworthy medium, the fact that Lieberman spends the majority of his working hours at his interventional cardiology practice also had an impact. The photo is one of a few that marks the beginning of citizen photojournalism. Sadly, many believe those photos also mark the end of many a professional photojournalist’s career.

To get the full story behind this and the hundreds of AP photos Lieberman has taken since, check out the full article on Poynter.