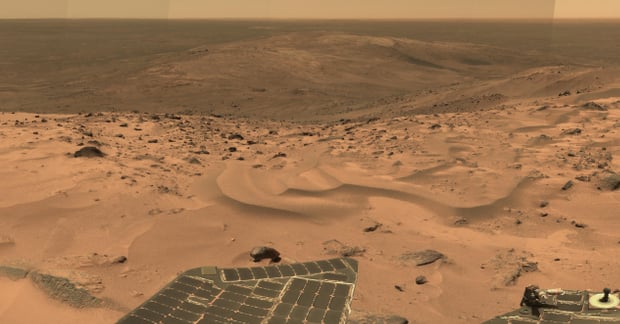 We love a good Mars panorama — be it a this selfie panorama by Curiosity or this gorgeous mountain-top shot by Opportunity — and now we have another one for you that is, arguably, the best of them.

Long before Curiosity was launched into space, and about a month before its ever-so-slightly-younger brother Opportunity headed off towards Mars, there was the Mars Spirit Rover.

It puttered around the Red Planet from 2005 to 2009, and in 2005, that puttering took it to the summit of Husband Hill — named in honor of Rick Husband, the commander of the Space Shuttle Columbia that disintegrated on reentry in 2003 — where it spent some time taking a beautiful 360-degree panorama of its surroundings.

That photo has been dubbed the Mars ‘Everest’ panorama, and according to APOD, it contains “a level of detail unparalleled in the history of Martian surface photography.”

Here’s a look at the whole thing (click the photo to see the spectacular full-res version):

The reason this particular panorama is special is because Spirit was told to snap the source photos at exactly the same resolution as a human with 20-20 eyesight. So this is, quite literally, what you would see if you stood atop Husband Hill on Mars and took in the view.

So be sure to click on the panorama above to take in the whole vista at full res. It’ll take forever to load, but it will be well worth your time to stand digitally at the top Husband Hill and look out on the surface of a planet that is an average of 140 million miles away at any given time… that just never gets old.