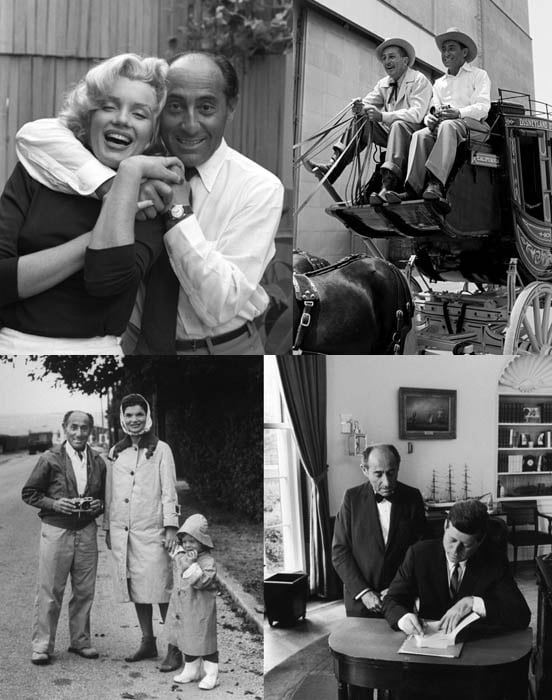 Best known for his iconic V-J Day in Times Square image, photojournalist Alfred Eisenstaedt snapped some of the most iconic photographs of the 20th century’s most famous faces. LIFE writes that the photographer had an interesting habit: jumping into the frame for self-portraits with his subjects.

The realization that “Eisie” […] often turned the lens on himself in this way is likely to astonish photography aficionados and casual fans alike. […] that he also clearly enjoyed “playing tourist” and posing with the rich, the famous and the powerful […] somehow brings the masterful photojournalist that much closer. This legendary man, these self-portraits allow us to tell ourselves, is actually more like many of us than we ever thought possible.

Eisenstaedt was also known to carry around an autograph book that he would ask his subjects to sign (JFK is seen signing it in a photo above). By the end of his life, this book was chock-full of the signatures of people that made marks on the 20th century: world leaders, athletes, artists, performers, and even other famous photographers.

Renowned sports photographer Neil Leifer is quoted as saying, “If Alfred Eisenstaedt, of all people, takes self-portraits with his subjects, and asks them for autographs, how unprofessional can it really be?”

Head on over to LIFE’s website to see a gallery of Eisenstaedt’s self-portraits. Any guesses as to how much his autograph book is worth these days?

LIFE on Both Sides of the Camera: Eisenstaedt’s Surprising Self-Portraits [LIFE via MetaFilter]