Here’s an interesting video in which renowned photojournalist Steve McCurry shares some thoughts on documentary portraiture. Titled Close Up: Photographers at Work, the video takes us behind-the-scenes with McCurry as he shoots some candid portraits on the street and then reviews some of his most prized shots captured over the course of his career. (There’s a brief glimpse of the original film slides of his iconic Afghan Girl photo.)


McCurry says that his goal is to capture a truthful portrait of humanity:

I think people, when you first encounter them, they try and put on a particular mask. I don’t want people to try and look a certain way. I want them to be complete natural and just themselves, without grinning, or smiling, or putting on some kind of silly expression […]

There’s this commonality of humanity, which comes through. Although they look different — they may be a nomad living in a tent — fundamentally they’re just the same as you or I.

We noticed that McCurry has an interesting way of holding his DSLR: he has handle mounted to the bottom, and often presses the shutter with his left hand when shooting in landscape orientation: 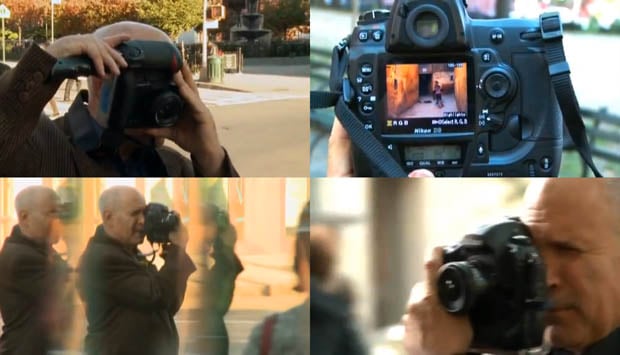 If you want to see a gallery of some of McCurry’s best work, CNN has just published a gorgeous slideshow featuring his images, titled Curiosity inspires iconic photographer.

Update: It appears that McCurry’s method of holding cameras is due to necessity rather than choice. Also, we just discovered that this video had already been featured once here before. Apologies!