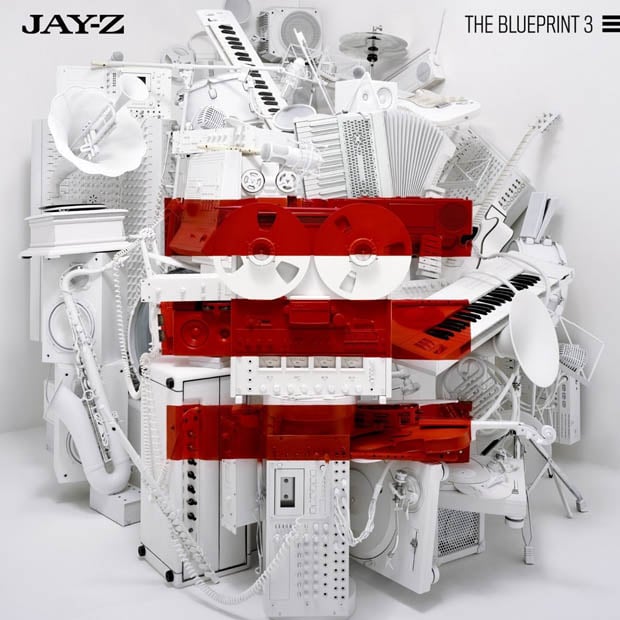 The photo above is the album cover for Jay-Z’s 2009 album Blueprint 3, featuring a photo of a pile of musical instruments and recording equipment with three red lines across the front. It might look Photoshopped — an easy way to create such an effect — but it was actually done with perspective trickery and good ol’ fashioned hard work.

After stacking the white-painted equipment into a corner, the team dimmed the lights and used a projector to display the three lines across the scene. They then took paint and covered all the areas that were highlighted by the projection. Once these areas were filled in, all they had to do was replace the projector with a camera to obtain the neat perspective illusion seen in the photo.

Here’s a behind-the-scenes time-lapse video showing how it all came together:

Click here for a higher-resolution version of the album cover photo.

We’ve featured a number of perspective art photo projects here before, and this projection trick was likely used for some of them (Bela Borsodi’s amazing alphabet letter photos, for example).

For others, you’ll need to have a through-the-viewfinder perspective of the scene (e.g. wireless live view). Zander Olsen’s wrapped trees and Golpeavisa’s food face are two such projects that come to mind.

Update: Reader Marco points out that the photographer behind the image was Dan Tobin Smith. Here’s what Smith had to say in a 2009 interview with It’s Nice That:

I love still life, and the way I shoot is quite old school. It took 3 days to shoot, was all shot on 10×8 inch film, so the quality in the whites is fantastic, so much subtle tone. We worked long and hard on the colour work on the post and even in a single page mag advert I can see that effort. You could blow the image up to the size of a building and it would still hold up. It seems the album is about that old school crafted production so its nice that that same method went into the shoot.

Turn Used Film Canisters Into Magnets for Your Fridge