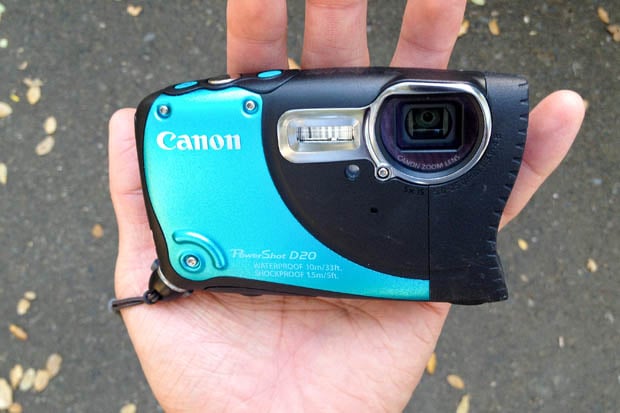 Point-and-shoot cameras aren’t doing so hot these days as consumers are replacing their multiple electronic devices with a single gadget: the smartphone. The compact cameras that have a chance of surviving are the ones that are special in some way, whether it’s having a gigantic sensor or being hardened with serious weatherproofing.

The Canon PowerShot D20 features the latter but not the former. Like the Olympus Tough TG-1 iHS, which we reviewed last month, the D20 is designed for people who want to casually document life’s moments in environments that are life-threatening to ordinary digital cameras.

The sensor found inside the camera is typical of a P&S camera designed for mindless everyday snapshots. It’s a 1/2.3-inch CMOS sensor that produces 12-megapixel photos, using ISO as high as 3200. As you might expect from a camera with these guts, the D20 doesn’t shoot RAW images, only JPEG.

On the back of the camera is a 3-inch LCD screen with 461K dots. Its neighbors are a bunch of bright, Gumby-esque buttons that’ll make you feel like you’re playing with a child’s toy. The layout is simple and intuitive, and the buttons are pretty easy to use. 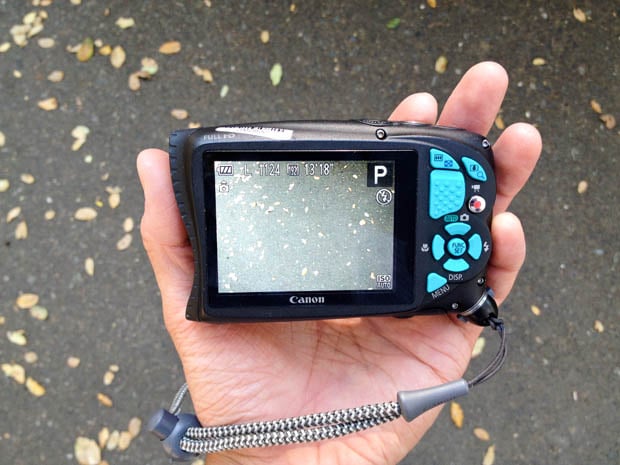 One great characteristic of the camera is that it’s pretty quick to respond to your commands. The startup time is super fast, and bringing the camera out of “standby” is nearly instantaneous.

The camera is designed to be used around water, sand, and other traditional enemies of cameras, so the most important question is whether the camera seals itself off well against these things.

You’ll be able to toss it around, dunk it into water, and bury it under sand without having to worry about suddenly having a useless piece of metal and plastic in your hands.

The sensitive compartments of the camera are protected by doors equipped with tab locks. These take some getting used to, since they’re not designed to be pulled out like an ordinary tab, but pushed downward like a lever. We almost broke a nail trying to pry it open before figuring this simple fact out, but it’s easy once you know how it works. We ended up being thankful for the design, since it ensures that the doors won’t accidentally pop open and ruin your camera. 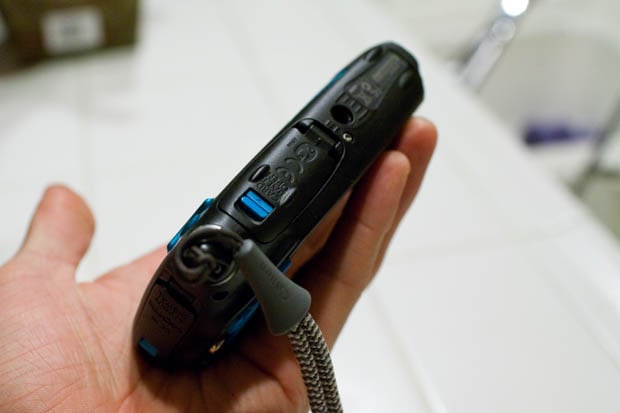 The next biggest question is whether or not you’ll be happy with the memories saved. Again, the answer is yes — but less emphatically. The photographs will look fine in your family album or in an email to family and friends, but so do many smartphone photos these days. As long as you’re buying this camera primarily for its all-weather powers and not for your dreams of being the next Ansel Adams, you’ll be happy.

Here’s a small selection of sample photographs we shot in the course of our testing:

We didn’t go into the water to take any underwater sample shots (sorry!), but doing a search on Flickr for “canon d20 underwater” returns some nice photos that shows off the camera’s underwater performance.

One of our main gripes with the camera is that the design is too specialized. Take one look at it, and you know that you’re dealing with a waterproof camera. That might be good decision by Canon for attracting eyeballs initially, but when people are shelling out around $300 for a digital camera, they’d probably like to use it not just as an “extreme camera”, but as an everyday snapshot camera as well. In this regard, the D20 doesn’t score very high marks.

Aside from the Gumby-esque buttons that we mentioned earlier, the camera is bright, flashy, and appears to be modeled after the shape of a fish (no, seriously… check out the tail). It fits right in when you’re shooting portraits of underwater creatures, but pull it out at a nice dinner with friends and it’ll stick out like a sore thumb. 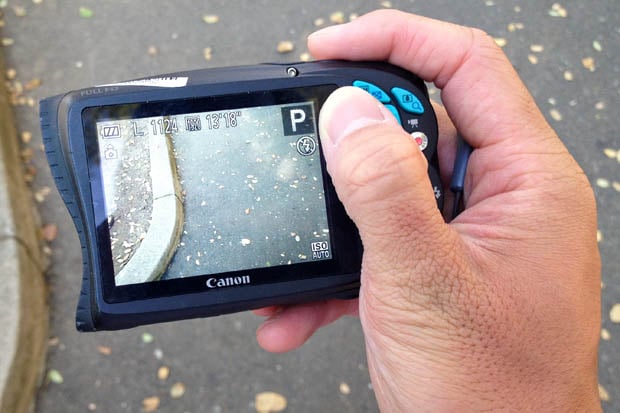 The maximum aperture of f/3.9 is another frustrating feature that further contributes to its “one trick pony” status in our minds. It’s fine for shooting pictures in bright sunlight, but bring it indoors and you’ll find it much more difficult to score useable shots.

The Canon PowerShot D20 is one of the more affordable weatherproof point-and-shoots on the market today, but at the same time it’s a bit too focused on its purpose. If only the design of the camera was more “normal” (read: less obnoxious), the camera could pass as a uber-durable camera for everyday snapshots. Unfortunately, it looks a bit too much like a tropical fish for our taste.

Unless you’re only planning on using the D20 for documenting outdoor adventures, or if you’re comfortable enough in your own skin to have it be your primary camera, then your money might be better spent on a different weatherproof camera with equal (or better) specs and a more stylish design.

Update: Apparently one of the great strengths of the D20 over its competitors is the camera’s underwater performance. If you’re mainly looking to use the camera under water rather than just around water, you might want to disregard many of the complaints we stated in this review.

A big thanks to BorrowLenses for providing the Canon D20 we tested for this review!