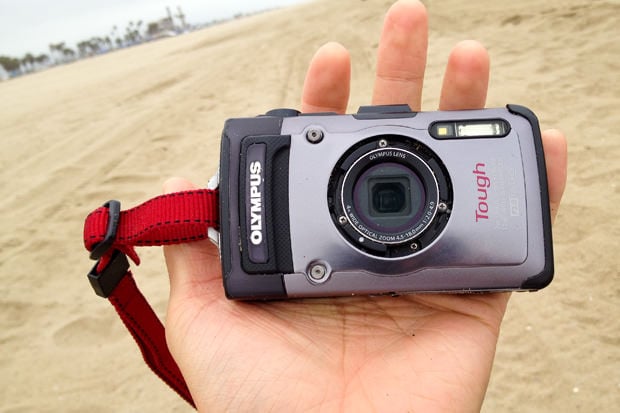 A few weeks ago, some friends and I went on a rafting trip. Not wanting to put an actual camera at risk, I decided to simply bring my iPhone along in a Zip-Loc freezer bag. A pretty ghetto solution, I know, but it turns out that many rafters do the exact same thing.

Announced back in May, the Olympus Tough TG-1 is a new $399 waterproof camera that’ll change the way you think about capturing dangerous-to-capture memories. 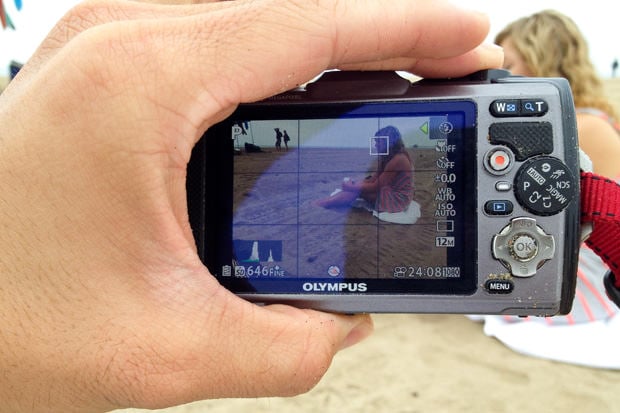 For some time now, bigger-sensor phones and smaller big-sensor cameras have been sounding the death knell for point-and-shoot cameras. At least, that’s what most people seem to think.

Instead of dying off, compacts may simply become more specialized.

The TG-1 is an example of specialization. It’s as point-and-shoot as point-and-shoots go — there’s no RAW capabilities, for example — but at the same time it’s a camera that’s built like a miniature tank that fits inside your pocket.

As such, it would be unfair to focus too much on analyzing its image quality or to compare it to any other camera that’s not built like an airplane black box.

Being waterproof, shockproof, crushproof, freezeproof, and dustproof, the camera has a clearly defined mission of going places other cameras can’t, allowing you leave that Zip-Loc bag at home.

Paradigm shifts take some getting used to. If you’ve ever gone snorkeling, you probably remember that the first time you stuck your head underwater, you instinctively held your breath and refused to breathe.

The TG-1 is like that. Initially, you’ll feel a strong need to protect it against the elements. After all, scratches are permanent, water destroys circuitry, and sand is impossible to get out once the grains sneak in. Those things are true of most cameras… but not the TG-1. 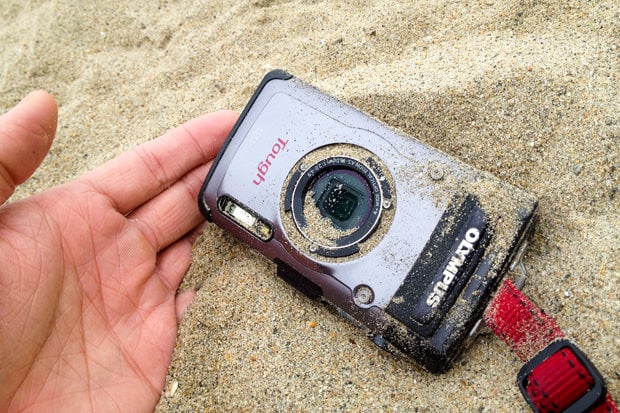 As you use the TG-1, you’ll feel more and more comfortable being careless with it. Before long, you’ll find yourself swinging it around while it’s attached to your wrist, dunking it in and out of water, banging it on hard objects without flinching, and hammering nails with it (okay, maybe not that last one).

The camera’s greatest strength is allowing you to document your outdoor adventures with peace of mind, since you won’t need to allocate half your brain toward making sure your camera survives the day.

One brilliant feature is the fact that both of the swinging doors come with double locks. The second lock switches help ensure that errant bumps don’t “un-proof” the camera. It’s virtually impossible to accidentally open up the battery or memory card doors. 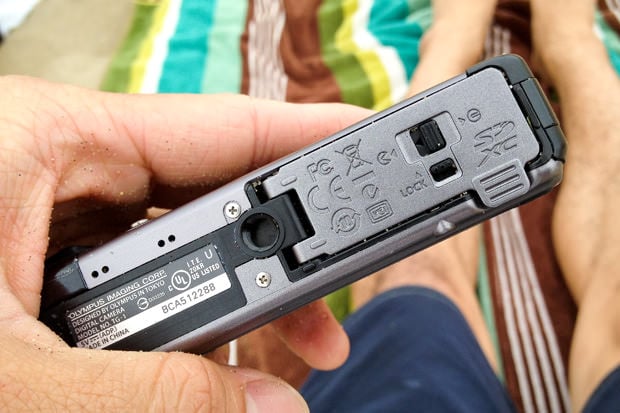 The mode dial on the back is also trained to obediently stay in place when you don’t want it to move. It has a low profile, and offers enough resistance to reject accidental brushes — helpful for when you’re flailing around in murky water.

As for image quality, I would say that it’s enough. Again, cameras should be graded based on what they’re intended for. The TG-1 packs a relatively small 1/2.3-inch sensor (a size found in many P&S cams), but the 12-megapixel photos that pop out have accurate color reproduction and decent sharpness (though, the sharpness does fall off slightly at the corners).

Here’s a video I recorded while trying to give some fish high fives using the camera:

Although the f/2.0 lens offers a respectable 25–100mm 35mm-equivalent range, I found that the zoom was sluggish. Going from wide to tele takes some time, and the whining sound emitted makes it seem like the lens movement is powered by exhausted elves struggling to turn the gears. Once you do make it to the tele end, however, the sensor-shift image stabilization can help make for pretty sharp shots.

The camera is also on the “girthier” end of the compact spectrum. While it does fit in larger pockets, you’ll definitely notice it there. Depending on how tight your clothing is, others may also.

The size isn’t a deal breaker, though. The camera is one that could work quite nicely as an all-purpose camera for capturing everyday life (you’re not going to drop $399 on a camera that’s only going to be used on rare occasions, right?).

Finally, after intentionally dropping the camera onto hard ground multiple times, the face of the mode dial popped off. I didn’t even notice it was missing until much later, since the camera still worked perfectly fine:

My recent rafting trip was the second time I had gone rafting in my life. When I went for the first time a few years ago, I swung by OfficeMax and picked up a $20 waterproof digicam.

That “camera” pretty much consisted of a shutter button and a 2-digit calculator-style LCD screen that displayed the picture count and error codes. The resulting photos looked like nasty web-cam shots that had suffered repeated “Mosaic” filters at the hands of a mad Photoshopper.

If those aren’t the kinds of memories you want to save, and you have $399 to drop on a new camera, you should definitely look into the TG-1. Its uber-durability and potential as an everyday camera make it an extremely attractive option at its price point.

You can find some sample photographs shot with the camera here.

You can purchase an Olympus Tough TG-1 over on Amazon.

Full disclosure: The Olympus TG-1iHS tested for this review was a loaner unit provided during an Olympus-sponsored trip and press event at the US Open of Surfing

(Re)touching Lives Through Photos and Using Photoshop for Good

What if Every Olympic Sport Was Photographed Like Beach Volleyball?