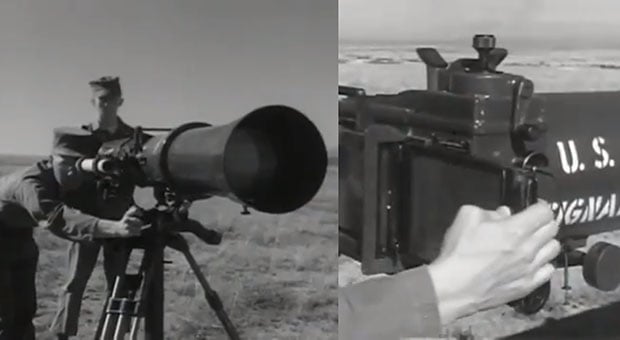 Check out this beastly camera used by Signal Corps during the Cold War. It featured a 100-inch infrared lens that was capable of seeing through over twenty miles of hazy air — perfect for capturing reconnaissance photographs of enemy strongholds. The camera was so massive that it required two people to operate: one to frame the shot, and one to snap the photo.

100-inches is 2540mm and the camera appears to use 4×5 large format film, so the equivalent 35mm focal length of this cannon-like lens is roughly 760mm.

Here’s a short video that shows the camera in action:

There’s a picture of the camera in the Corbis archives as well. Here’s the original caption it was given:

A new camera equipped with a 100 inch infrared lens can look through atmospheric haze and record on film objects up to 30 miles away, a feat almost impossible in terrestrial photographic equipment previously. Developed by the Army Signal Corps engineering laboratories at Fort Monmouth, New Jersey, the camera provides the tactical advantage of being able to photograph targets many miles away in combat conditions.

Nowadays, you can buy lenses with even further reach that aren’t nearly as big, but you probably won’t be shooting the image on large format film…

Update on 2/20/20: We’ve learned that one of the men standing with the camera is Cpl. Stanley P. Thor, United States Army, 301st Signal Corp. Thor served in the Korean War, was part of the first crew with this camera, and is now 87 years old.

Underwater Photos That Mimic the Look of Baroque Paintings