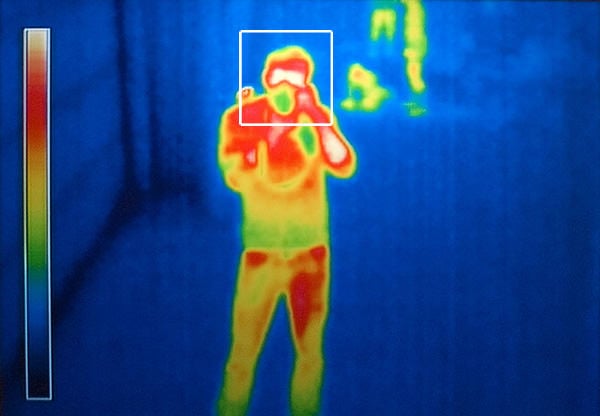 Over the past decade, many airports around the world have adopted special thermal cameras that can determine whether or not a passenger has a fever. The goal of these cameras is to prevent infectious diseases from spreading and causing an epidemic (or pandemic). Greek scientists Georgia Koukiou and Vassilis Anastassopoulos recently came up with a similar concept, except their thermal camera is used to detect drunk people instead of contagious people.

The paper they published, titled “Drunk person identification using thermal infrared images” and published in the International Journal of Electronic Security and Digital Forensics, details two algorithms that use thermal images of a subject’s face to determine whether or not they’re intoxicated. Liat Clark of Wired writes,

[…] alcohol causes blood-vessel dilation at the skin’s surface, so by using this principle as a starting point the two began to compare data gathered from thermal-imaging scans. One algorithm compares a database of these facial scans of drunk and sober individuals against pixel values from different sites on a subject’s face.

A second algorithm is used to map out the different areas of the face. The pair found that, when inebriated, an individual’s nose tends to become warmer while their forehead remains far cooler. To use this information against the database with the first algorithm, a second algorithm was necessary to identify and differentiate between features.

The system would be a godsend for law enforcement tasked with monitoring rowdy areas of a city. After being previously limited to observing behavior and giving breathalyzer tests, police officers would be able to easily identify drunk people in a crowd by simply pointing a thermal camera at them.

Fuji Announces the X-E1, the Smaller and Cheaper 16.3MP Sibling of the X-Pro1