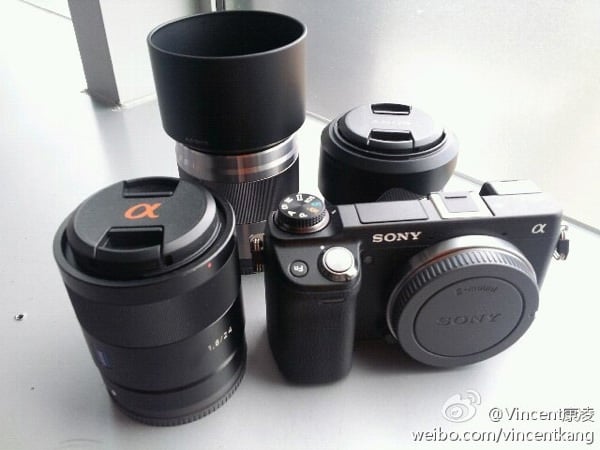 Sony is attacking the mirrorless camera with a one-two punch this year. After announcing the Wi-Fi-equipped NEX-5R last week, the company is preparing to also release the NEX-6. The two cameras are nearly identical in terms of specs and features, except for one major difference: the NEX-6 has a built-in electronic viewfinder, while the NEX-5R does not.

sonyalpharumors published a new photo today leaked to Weibo (AKA Chinese Twitter) by a guy named Vincent Kang. The leaked image confirms the presence of the EVF first seen in prototype photos that leaked last month. We also see that the mode dial on top of the camera is much more raised than the one on the 5R. The camera is designed as a more-affordable alternative to the NEX-7: a diminutive camera with a serious 16.1 megapixel APS-C sensor, Wi-Fi, and apps. It’ll be unveiled on September 12th, 2012.