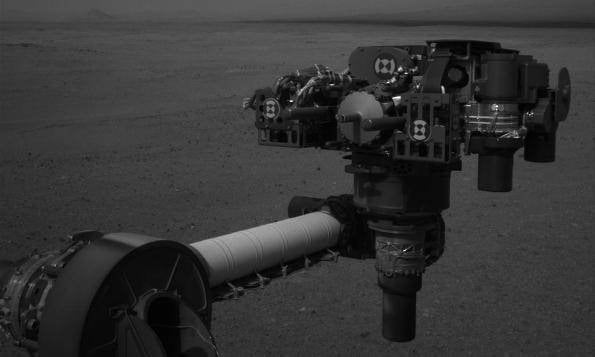 Earlier this month, when we were exploring why the NASA Curiosity rover’s cameras are so lame, we mentioned that the total amount of data the scientists can transfer on a daily basis is only around 31 megabytes. As anyone with a restrictive cell phone dataplan can attest to, having a small data cap makes you think carefully about the data that you choose to download. Glenn Fleishmann over at The Economist has an interesting writeup that sheds some light on how NASA scientists make their Martian photo shoot decisions:

Every day Justin Maki faces a tricky balancing act. He is one of the boffins at NASA’s Jet Propulsion Laboratory (JPL) responsible, among other things, for deciding what Curiosity photographs each Martian day, or sol, and which pictures it sends back home. “We can always take enough pictures to fill up the downlink,” Dr Maki says. The mission can currently beam at least 30MB a sol, including scientific measurements, engineering data and images, from Mars, via two satellites orbiting the planet, to Earth.

All of the rover’s 17 cameras, seven more than any previous exploratory vehicle, store images in a raw, unprocessed format and initially beam back tiny thumbnails (which NASA uploads as they come in). The scientists working on different aspects of the mission meet daily to determine which of the thumbnails to download in higher resolution. The “health and safety” of the rover takes priority. After the deliberations, which can last over an hour, instructions are dispatched to Mars.

New Leaked Photos of the Fujifilm X-E1 Shows the Flash, Top, and Back