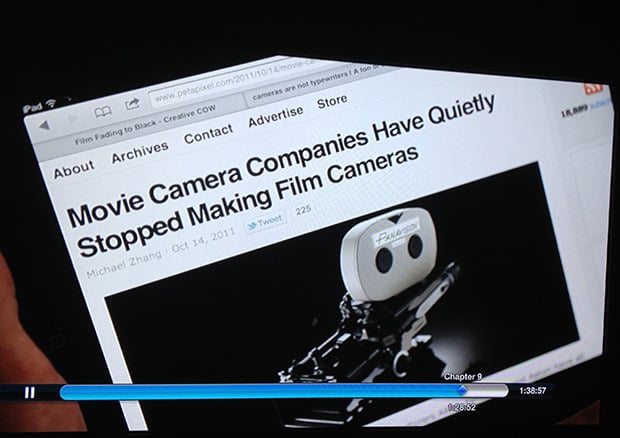 Earlier this month we wrote about a new Keanu Reeves-produced movie titled Side by Side, a documentary about the major shift going on in Hollywood away from film and toward digital. In addition to the interesting subject matter and star studded list of interviewees, here’s another thing that makes the movie awesome: PetaPixel makes a cameo.

I actually haven’t gotten around to watching the film myself, but longtime reader Matthew Achariam just sent us an email informing us of the fact. While watching the movie, he was surprised to see a brief glimpse of this blog.

At around 1:28:52, the movie briefly shows an article that we wrote in October of 2011 about the fact that major movie camera companies had stopped producing film cameras.

Achariam tells us that it was a great movie, and the fact that the film has a 8.3 rating on IMDB and 93% Fresh rating on RottenTomatoes seems to confirm that. If you’ve seen it already, leave a comment telling us what you thought!