Back in May, we wrote about a photographer named John Butterill and his brilliant idea of using a Internet-connected phone to share his photo adventures with people whose mobility was limited. Google liked Butterill’s story so much that they’re sharing it as an example of the different things you can do through Google+ Hangouts. The video above is a neat look at how Butterill came up with his idea, and how the concept quickly spread around the world. 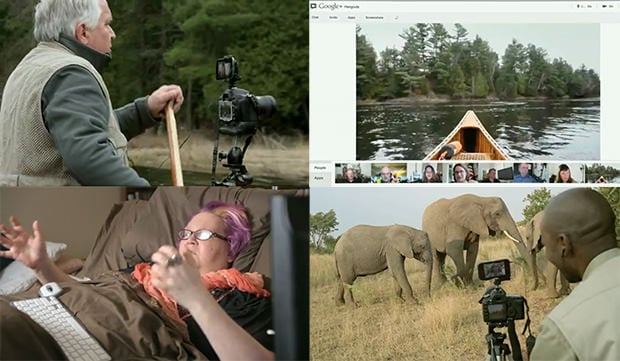 The YouTube account he set up for the project now has over 20 videos showing photographers leading hangouts on virtual photo walks around the world. The locations visited range from beautiful national parks to inside views of car shows.

Here’s one of the videos, which shows photographer Bruce Garber taking people on a photo adventure in Boston to shoot the USS Constitution and a Blue Angels fly-over in Boston Harbor.

If you want to conduct you own virtual photo walk, you’ll need a smartphone (one with a front and back camera), a data plan with at least 200MB of available data (this gives you about 30 minutes of streaming), and some kind of way to mount your phone to your camera.

Are the Mirrors Inside DSLR Cameras Ever-So-Slightly Green?