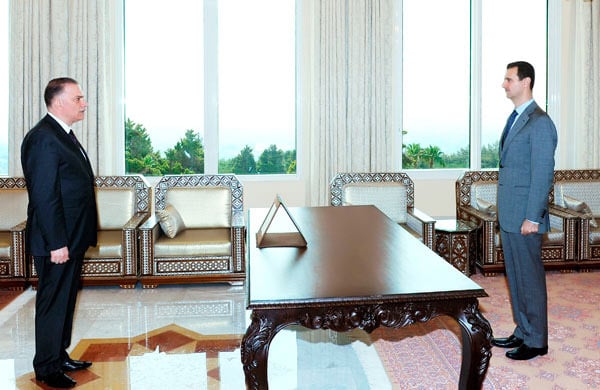 Government officials have been caught in a number of Photoshop flubs recently, from the Egyptian president being edited to be walking at the head of a pack of world leaders to a badly Photoshopped photo of Chinese officials that went recently went viral. Now the Syrian government may be the latest culprit — the country just released an image of its president swearing in a newly appointed governor, and something doesn’t quite look right…

The Guardian’s imaging expert David McCoy believes two pictures have been merged to make it seem like the men are in the same room, with the one on the right positioned fractionally higher than the one on the left. This becomes clearer when you look closely at the floor, which is distorted. The right hand side of the picture has been stretched downwards into place to line up with the left side (which is not distorted). [#]

What’s your analysis? Is this this yet another government manipulated photo?