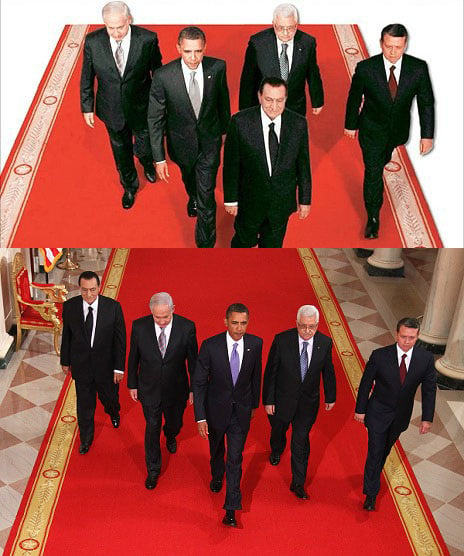 The top photo was published by Al-Ahram, Egypt’s second-oldest and most widely circulated newspaper, while the photo below it is another photo taken at almost exactly the same moment in time by Getty Photographer Alex Wong. The main gripe people have with the edited photo is that the paper placed Egyptian President Hosni Mubarak at the front of the group — suggesting that he was leading the Middle East peace talks — while he was actually trailing behind the others.

Not content with shifting people around, the paper decided to change the colors of the ties, and to make the leaders look like they were strolling on a flying carpet. It’s pretty clear Al-Ahram needs to fire their Photoshop guru and hire someone more competent — either that, or stop being a “corrupt regime’s media“.