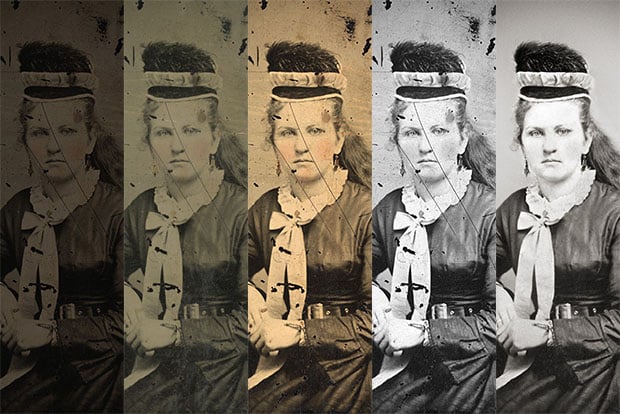 Photo restorer Bob Rosinsky of Top Dog Imaging wrote an interesting article describing how he restored a tintype photograph from the 1870s brought to him by a client.

My standard operating procedure is to use an ultra-high resolution camera combined with a top-of-the-line macro lens to photograph tintypes. I use strobe lights to illuminate the artwork. Strobes produce “hard” light, much like the sun on a clear day. In addition to the strobes, I place a polarizer over the camera lens and polarizer gels over the strobe lights. This eliminates all reflections and enables the camera to pick up a greater tonal range along with more detail.

[…] I began the laborious process of restoration, which involved a prodigious amount of retouching.

Reminds us a bit of this 76-year-old Chinese Photoshop master’s work.

Restoring a Photograph from the 1870s (via kottke.org)

P.S. Earlier this week another tintype photo from the same decade sold for $2.3 million.

Lunar Eclipse Over the Acropolis