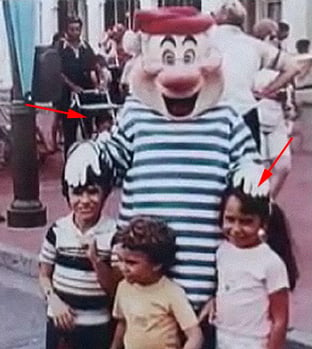 Here’s a fun story that might convince you to snap all the photos you can of your kids: Alex and Donna Voutsinas were gathering photos in preparation of their wedding when Alex suddenly noticed something in one of Donna’s childhood photographs. The photo, taken 20 years earlier when Donna was 5, showed Alex’s father in the background pushing Alex in a stroller!

After visiting his mother’s house, Alex found photographs from the same day in which he and his father were wearing the same clothes, confirming that they were indeed the people in Donna’s photo.

What’s even crazier is that at the time the photo was taken, Alex and Donna lived in different countries, with Alex living in Montreal and Donna living in Florida. They eventually met each other at work, fell in love, and became another of Cupid’s success stories.

Image credit: Photograph by Alex and Donna Voutsinas and from WXII