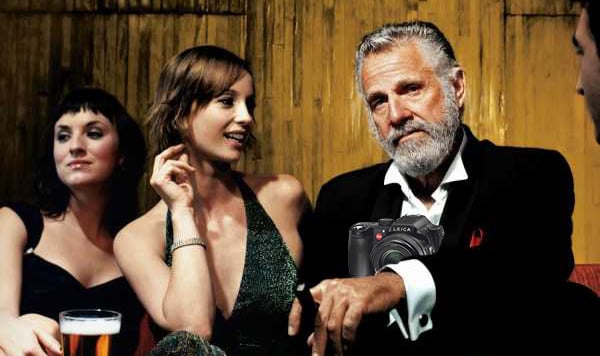 He’s photographed lions… from the inside
When NASA had to repair the Hubble… they borrowed his lens
He built his first camera when he was five… out of a toaster
His portfolio has been known to stop wars
He photographed a sunset once… it waited for him
His list of clients include Bigfoot, Santa Claus, and those little grey aliens

He is… the most interesting photographer in the world…

“I don’t always shoot film, but when I do… I prefer Dos Chromas. Keep shooting, my friends.“

If you’ve never seen these commercials before, you can go check them out on YouTube.

Wikipedia also has a list of facts about him:

He can speak French… in Russian.
His personality is so magnetic, he is unable to carry credit cards.
He once had an awkward moment, just to see how it felt.
His charm is so contagious, vaccines have been created for it.
His organ donation card also lists his beard.
The police often question him just because they find him interesting.
He is the only man to ever ace a Rorschach test.
His mother has tattoo that reads ‘Son’
Alien abductors have asked him to probe them.
Bulls flat out refuse to fight him.

Do you “know” any other “facts” about the most interesting photographer in the world? If so, leave a comment and we might include your fact in this post!

EyeSeeCam Tracks Your Gaze to Capture What You See