The vast range of the new Fujifilm camera lines might explain how Fujifilm, the imaging-specific company placed 19th on the list of top US patents filed in 2009.

In addition to its existing line of point-and-shoots and digital hybrid bodies, Fujifilm has also been developing a 3D camera paired with special 3D photo and video digital viewers, an improved instant photo line, and a new medium format camera. A booth rep said that Fujifilm’s major selling point is their “commitment to photography in all forms,” which resulted in their wide spectrum of cameras this year.

Fujifilm’s FinePix REAL 3D W1 camera had a limited release on the Fujifilm store site in 2009, and carries a hefty price of $599.

I spoke to the 3D imaging product manager Jim Calverley at PMA, who said the reasoning behind the price was because Fujifilm wanted the product to be available for serious 3D photographers who would appreciate the functionality of the camera, and would be less likely to return the equipment. At the same time, Calverley said, “Don’t expect to film the next Avatar on this handheld camera.”

Nevertheless, this point-and-shoot sized camera can produce some pretty fascinating images and video — that is, if you’ve got an eye for what would work well with the 3D style. Calverley said that the 3D technique works best with images that have many layers of depth — not necessarily depth of field in photo terms, which is entirely different. Depth of field for traditional camerasrefers to the distance and section of a photograph that is in focus (like a single flower, sharp against a blurred field in the background), whereas 3D photographers shoot images that have multiple layers or depth in a compositional sense, layering  a flower in front, a person behind, and the field in the background.

The camera takes two images at a time, much like how the human eyes see images: with two separate lenses.

Images taken with the camera can be viewed in several different ways — and top of the price of the original camera: 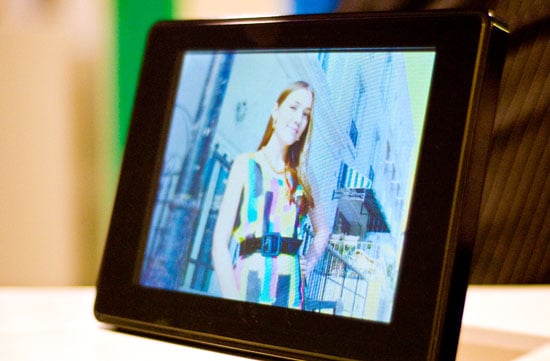 The prices are pretty high since the use of the technology on a consumer level is new, but Calverley said,” We’re casting a wider net this year,” and that the products will be more widely available to see and test at local camera dealers. 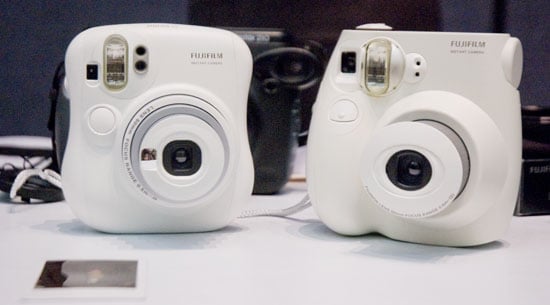 Back to a more practical and affordable consumer level, Fujifilm is also releasing new models of Instax, their instant camera line, which now includes the Instax mini 7s for around $99 and the smaller Instax mini 25 for about $119. There is also a new wide-format Instax 210.

The Instax mini 25 (pictured on the left) is especially geared for the youthful consumer; it comes equipped with a small self-portrait mirror next to the lens opening.

The Fujifilm reps said that the cameras, especially the wide image format, are popular in fashion photography, when quick images and headshots are demanded. Interestingly, another industry, so to speak, that the cameras are in demand  for is the law enforcement and crime scene investigators; these instant shots cannot be digitally manipulated and have a higher integrity and faster tangibility than digital or film. 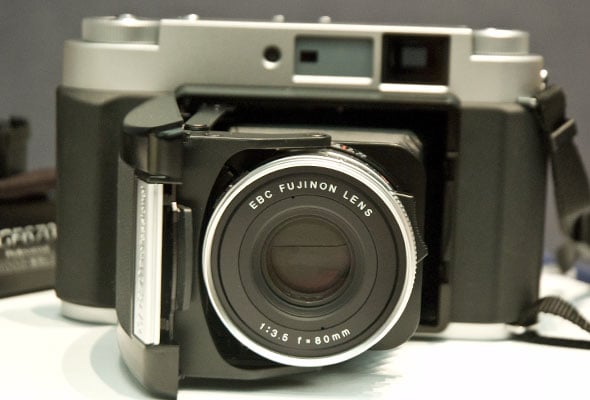 For film fanatics, Fujifilm also boasts a new GF670 medium format camera for pros. The camera is projected to be released in April 2010 for an MSRP of $1995.

The camera features a folding 80mm Fujinon lens, which gives the camera a lightweight, compact feel and a nostalgic look. (Mouse-over the image to see the side view.)

It also has an electronic metering system and rangefinder, PC flash cord port, and up to 3200 ISO.  It can shoot in 6×6 format or 6×7.

Another breath of relief for film fans: the booth rep also said that any whispers or rumors about Fujifilm discontinuing any type of their film are rumors; they’re doing better than most film companies, he added.

In any case, it looks like a big year for Fujifilm.

Water Drop at 2000 Frames Per Second