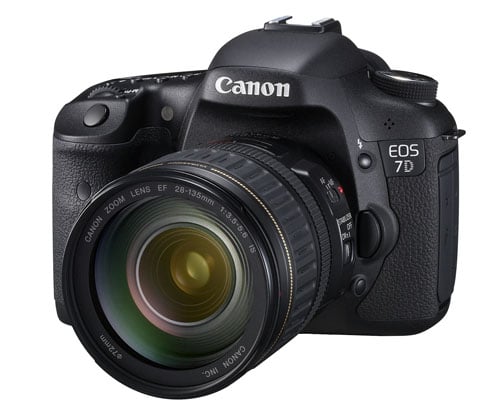 Yesterday Canon announced the Canon 7D, attempting to “redefine the mid-range DSLR category”. My first thought after hearing that it’s a crop-frame camera was, “Is it the older brother of the 50D and the younger brother of the 5D Mark II?”. Turns out it’s neither, but is instead something that definitely belongs in the high-end lineup and a camera that 5D shooters can switch to without “downgrading”.

So what’s so special about this new camera? Why was it grouped with the single digit, high-end cameras rather than the prosumer ones like the 50D?

Crop vs. Speed vs. Quality

The 7D actually fills a hole in the high-end lineup that existed before it was introduced. For the Canon’s flagship cameras, they’ve offered a choice between crop factor and speed since 2002. The 1Ds line is full frame, but shoots “only” 4 frames per second. The 1D line has a 1.28x crop factor, but shoots a whopping 10 frames per second. This is good for sports photographers in two ways:

First, the crop factor gives the photographer “extra zoom” great for sports, where you’re usually somewhat far away from the action. If you’re using a 300mm telephoto, the 1.28x means you’re essentially using a 300×1.28=384mm lens. Second, sports photography is all about capturing quantity and selecting the best images and the higher frames per second helps in this.

Back in high school when I played on the tennis team, it would always be an interesting experience when the local newspaper’s photographer came and photographed us as if he was using a machine gun rather than a camera. The action in sports is unpredictable, so a higher number of frames per second makes it more likely you’ll end up with a good sports shot.

In terms of resolution, the 7D boasts 18 megapixels, less than the 5D MkII’s 21.1, but a step up from the 50D’s 15.1. The lower megapixels than the full-frame 5D is to be expected (1D’s 10.1mp vs. 1Ds’s 21.1), and will make transfer times between the camera and the memory card faster, which is yet another plus for sports photogs.

Prior to the 7D, the high-end category that the 5D line occupied was missing its equivalent of the 1D — a camera of similar quality, but non-full frame and offering a higher frames per second. By offering the 7D, there now exists a “5D for sports photographers”.

The 7D has a whopping 19 autofocus points… That dwarfs the 9 user AF points of the 5D Mark II. Again, this a great for sports photographers.

My guess is that the next DSLR in the 50D line will still have 9 points, while the next version of the 5D will get bumped up.

An interesting feature Canon decided to include in the 7D is the new RAW/JPEG toggle button located on the back of the camera above the LCD screen. 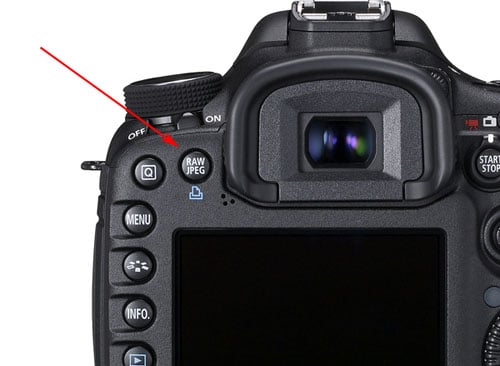 This allows you to capture the next frame as RAW+JPEG, regardless of which format you’re currently shooting in. Say you usually shoot JPEG, but occasionally come across something you’d like to have a RAW version of as well. Instead of changing back and forth in the menu system, you can use the new button to selectively shoot in both formats whenever you feel like it.

The 7D also improves on the 5D Mark II in its viewfinder frame coverage. It boasts a 100% frame coverage, the same as the 1D and 1Ds lines, and more than the 98% offered by the 5DMk2. In comparison, the 50D line only has about a 95% coverage. This means that the camera actually photographs 5% more than what you see through the viewfinder.

With the 7D, what you see through the viewfinder is what you get in your photograph.

The 7D also contains a built in Speedlite transmitter in its built-in pop-up flash. This allows you to control off-camera Speedlites without purchasing a separate transmitter that could cost a couple hundred bucks.

When the 5DMk2 was released, the estimated retail price was set at $2,699. The 7D will be released at a much lower price point (to be expected for a crop sensor, right?) of $1,699, putting it in the range of 50D series photographers.

Another thing that separates the 7D from the 50D line and makes it similar to the 5D is the HD video recording capabilities. High-definition video is appearing more and more in newer DSLRs. Perhaps it will become a lower-end feature before long…

Many of the other features of the 7D are the same or similar to the 50D and 5DMk2. You can view a simple comparison table of Canon’s entire DSLR lineup on Wikipedia.

The 7D announcement is definitely exciting news, and gives both something easier for users of the 50D line to jump up to, and something existing 5D line users can switch to if they prefer something like sports photography, but don’t want to downgrade in quality.

I think the 7D is a camera that could have been easily predicted by studying Canon’s lineup and groupings.

What’s next? A cheaper prosumer full frame? That would surely set the bar.