Going to school in Berkeley, California, there always seems to be something people are protesting. A few times the past couple years, I took the time to run to some of the demonstrations downtown, and found that they’re always rich opportunities for interesting photographs.

There’s going to be a protest at Union Square in San Francisco tonight at 6pm regarding the election in Iran, so I thought I’d share a few tips for shooting from my experiences.

Unlike ordinary street photography, you don’t need to be very cautious about sticking your camera directly in someone’s face, since it’s exactly what most people at the protests are asking for! I remember seeing one of my buddies taking portraits of people at a demonstrate with his camera only a foot or two from the face of one of the protesters. There aren’t too many other opportunities where so many strangers will let you be so intrusive with your camera.

There’s going to be all sorts of different emotions on display at a demonstration. People shouting, laughing, cheering, etc… Go to where the action is and try to capture it. 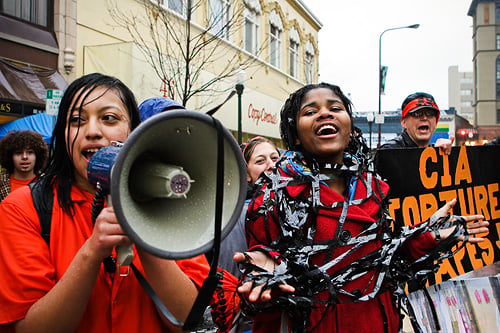 Since everything is happening so quickly, it’s difficult to capture exactly the pose or expression you’re looking for. Get into position and take numerous frames (use a continuous shooting mode if you have one). You’ll probably end up with a lot of junk and a few gems.

One of the mistakes I made once was bringing a single memory card and nothing else. When I filled up the card, there was still photos to be shot, and I ended up having to go back and delete photos to make more room. Don’t let this happen to you! Bring extra cards and a laptop to empty your cards onto if they get full.

People do all sorts of interesting things at protests that make for eye-catching photographs. The woman above wasn’t actually posing for a picture but was simply playing with the dog… From the way it’s captured though, it seems like they’re making a political statement, right?

6. Capture Two Things at Once

Look for angles that allow you to tell a story in both the foreground and the background. In the photograph above, the arms in the foreground and sign in the background both contribute to the story being told.

People will probably bring some pretty interesting signs, and capturing them will help you tell the story of what’s going on. 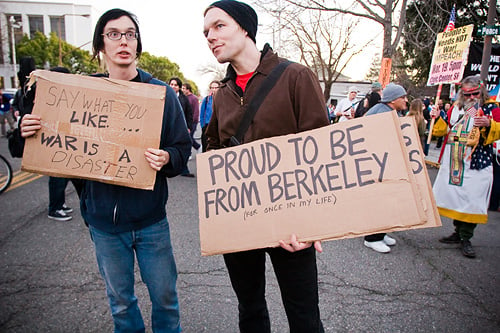 In addition to getting in close and capturing details and emotions, it’s also good to step back and show the context of what you’re photographing. Two good ways to show the crowd are from getting up high or shooting down a line of people. A wide angle lens would help for a view from above. 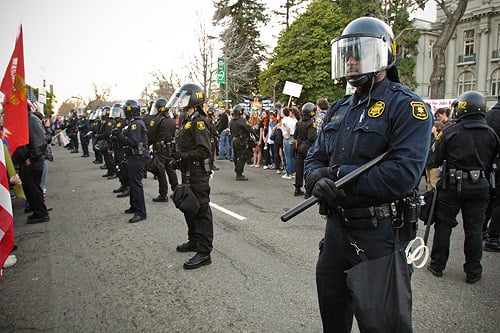 Protests often include counter-protesters, and conflicts between the two sides (and with the police) make for interesting photo opportunities. If you have the option to shoot RAW, do it. It will give you much more flexibility in fixing mistakes you make later on down the road. There’s a huge difference in how much you can salvage and fix between RAW and JPEG, so if you have the ability and memory card space to shoot RAW, you definitely won’t regret it.

This list was obviously not comprehensive, but just some things I picked up through shooting protests in Berkeley. If you have any other tips or suggestions (or disagreement), please leave a comment!

Interview with Kathleen Connally of A Walk Through Durham Township