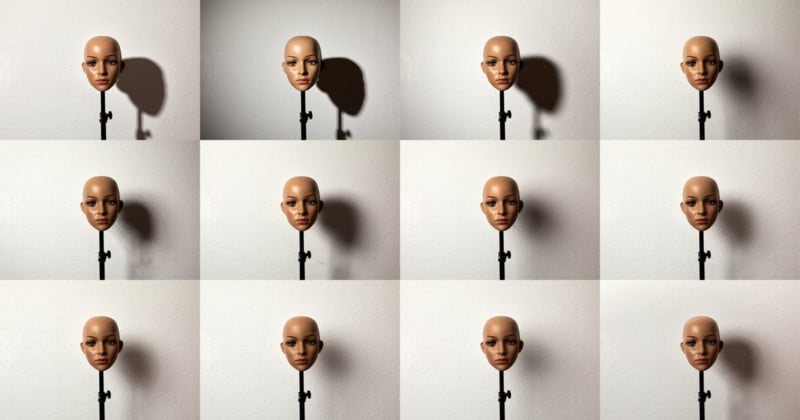 Picking the right light modifier is often crucial to the success of the image. With hundreds of different modifiers to choose from, there is really nothing you can’t do. However, a wide choice often ends up confusing or possibly scaring photographers.


With an overwhelming majority resorting to a softbox for all work, few explore the possibilities that different modifiers offer. For this article, I took 11 of the most popular light modifiers and compared them to each other.

For this comparison, I metered each light so that it would give the same exposure at the end. I shot all images on a Canon 5D Mark IV with a 24-70mm f/2.8 lens that was placed on a tripod. When working with an umbrella, the light was simply turned around and tilted.

The most simple way to light is to just stick a bare-bulb flash in front of the camera and fire away. This light doesn’t have any particularly nice falloff, it just goes from light to shadow which isn’t flattering to the face in most applications. That said, I’ve used this setup in the past in order to light my fashion images, but before using hard light I made sure that the makeup artist has done their best to make the skin perfect. Hard light means a lot more retouching as it brings out a lot of unflattering skin imperfections. 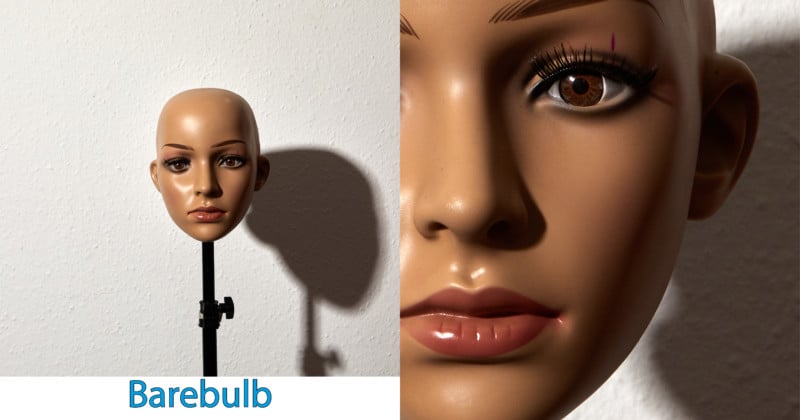 This is essentially narrowing down the light spread. When used bare bulb, a flash may spread the light 180 degrees or 360 degrees depending on the model. However, this is not always useful when it comes to things such as spotlighting. For example, when using gels you may want to narrow down the light spread so that the colors of gels don’t mix. This is where the grid is useful. In this picture, you see that it eats up a little light, and makes the falloff more dramatic. The background has less light on it, and you can in fact see the falloff into darkness. The shadow quality on the face is nearly identical to the bare-bulb flash. 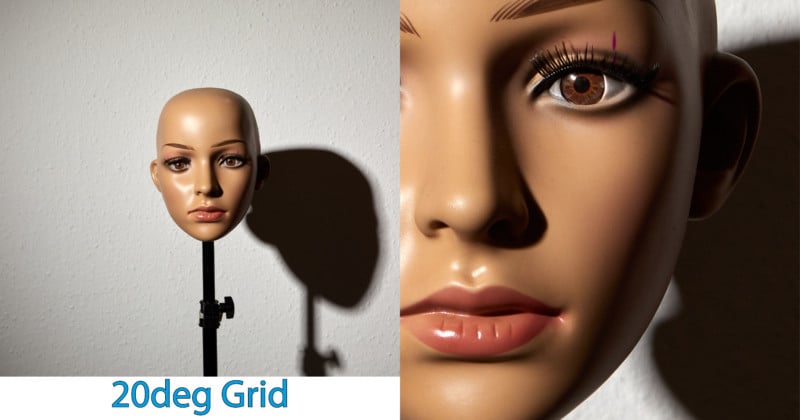 This is the best way to replicate sunlight. It’s a great modifier for creating a hard but natural-looking light. I use it a lot for fashion work where I need a hard light. One other benefit of the magnum reflector is that it increases light output. The Profoto OCF magnum is able to give me two stops more power which is welcomed on outdoor shoots. It produces a shadow with somewhat graduated edges. Overall there is a lot of highlight-shadow contrast. A fill light would be recommended to even out the image. 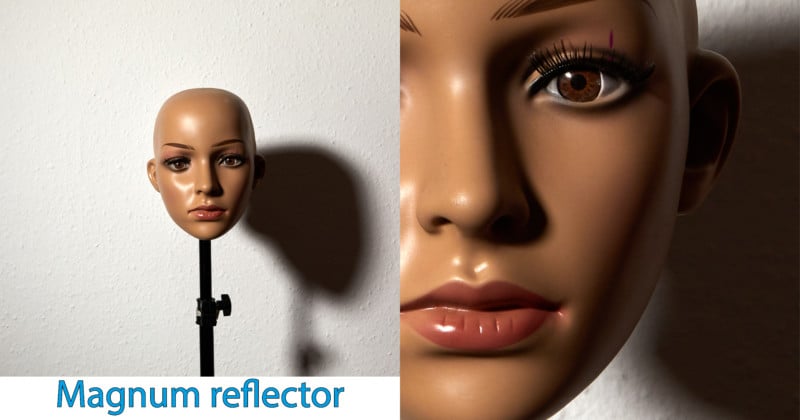 This is a more traditional portrait look. A 2×3′ softbox is very popular among many photographers. It is easy to see why: it produces a very smooth light that has a gradual falloff. Because most softboxes feature a reflective interior, they will produce some clipping. The catchlights in the eyes are rectangular, which makes it looks like a window. There is still contrast, but it’s not drastic.

Overall, this is a great versatile modifier that is fantastic for most off-camera-flash applications. The main difference between softbox sizes would be the area it covers and the size of the highlights. A small softbox will bring out more skin detail because it is hard while a large one will be much nicer on skin given that the distance is the same. The same applies to all other surfaces. An embroidered dress will benefit from hard light, while a chiffon one will appreciate softer light. 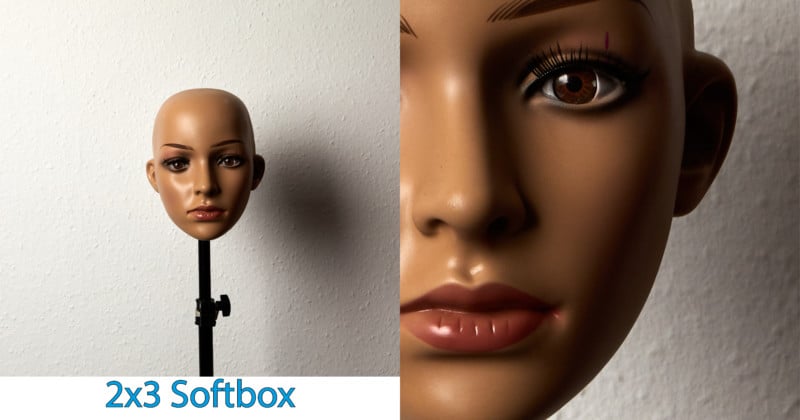 This is the smaller version of the square softbox. given its size, you can see immediately that the light is getting harder. There is more clipping(bright spots on the skin). This softbox is useful for close-up portraits where the face is the main focus. Trying to light a full-body shot with this will render it useless. Another way to use a small softbox like this would be in product work, as that often demands a fine and small patch of light. 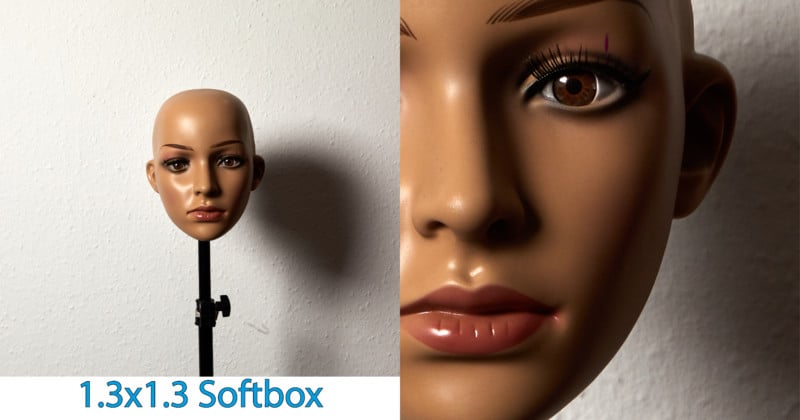 This is just one more softbox. The round shape of the octabox is preferred by photographers who want to get round catchlights. Another reason to use a round softbox is that horizontal and vertical shadows will be the same. The larger the light source, the softer the light. If a softbox is 3 feet horizontally and 1 foot vertically, it will produce a soft horizontal but a hard vertical shadow. The difference is best seen when one edge is significantly longer than the other. You can see that a 2×3 softbox has slightly harder vertical shadows and softer horizontal ones, whereas an octabox has them consistently soft. 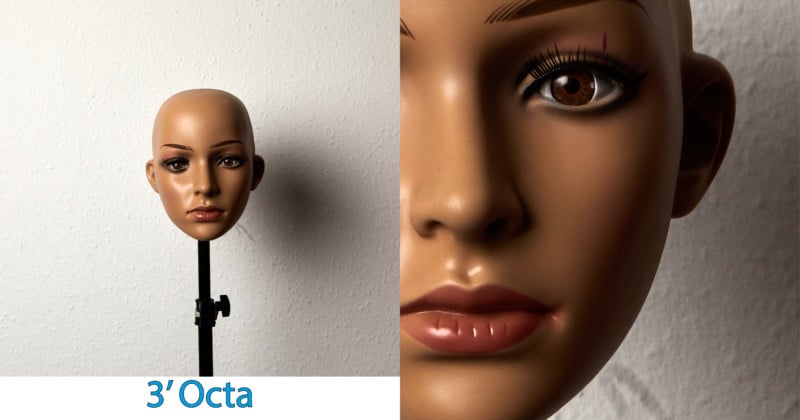 Because the interior of this modifier is reflective, it will produce specular light that will result in skin clipping. Overall it makes a concentrated light spread with faster falloff and deep contrast. The silver beauty dish will give you more power because of the specular interior. Each beauty dish has a so-called sweet spot where the thrown shadow from the disk in the middle is. A silver beauty dish will have a very small one so you must be very precise with the placement. This can be useful when working on location in harsh sunlight. Another application for the silver beauty dish is in sports photography where contrast is used to accentuate the shape of athletes. Photographer Gary Land has used the silver beauty dish in much of his commercial sports work. 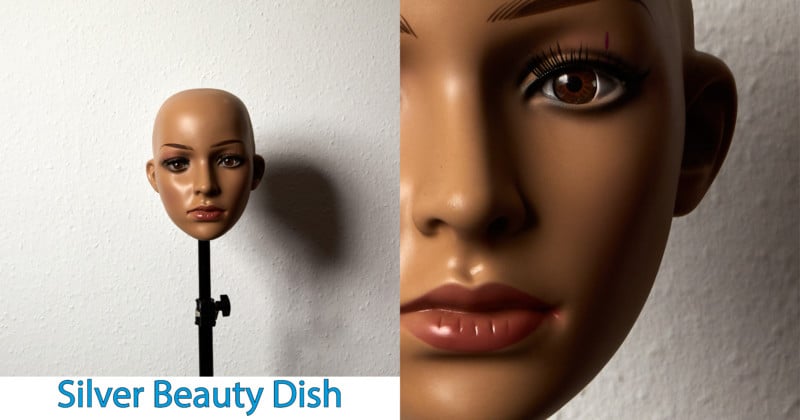 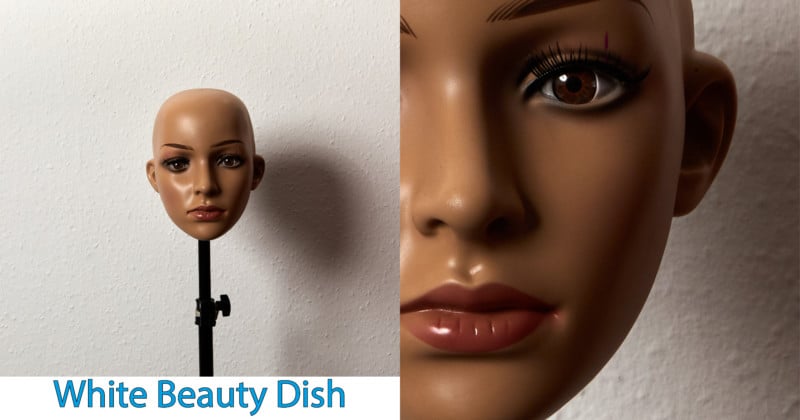 One of the simplest modifiers, and in fact the most versatile one, is the white umbrella. It has a white interior making the light diffused. The skin doesn’t clip while having a smooth texture to it. There is not too much shadow-highlight contrast. This modifier is just over 3 feet in diameter when open and 1.5 feet closed making it travel-friendly. A white umbrella is the go-to for producing soft bounced and flattering light. In large studios, on sets, a white umbrella is a popular choice for lighting a background for the even and large light spread that it gives. 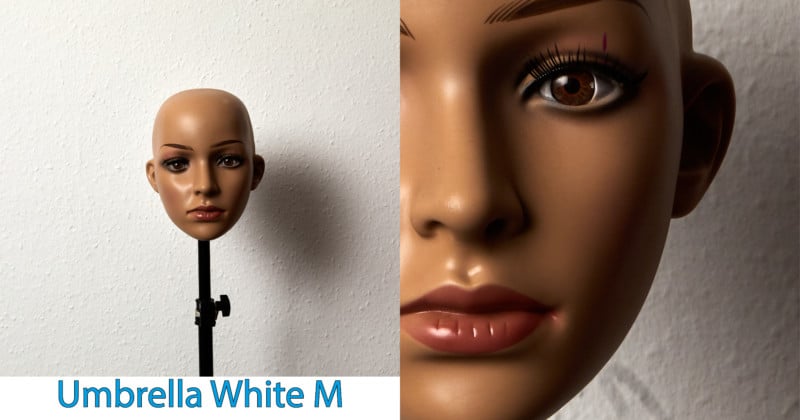 Adding a diffusor to the umbrella will produce less highlight-shadow contrast, as well as give an even more even light with less gradual falloff. Bear in mind that it will eat up a lot of power. This has become a popular setup among famous portrait photographers such as Annie Leibovitz or Clay Cook. Annie Leibovitz often gives her assistant a white umbrella with a diffusor to use as a key light. Placing it close to the face will give a flattering light, but with a lot of definition. 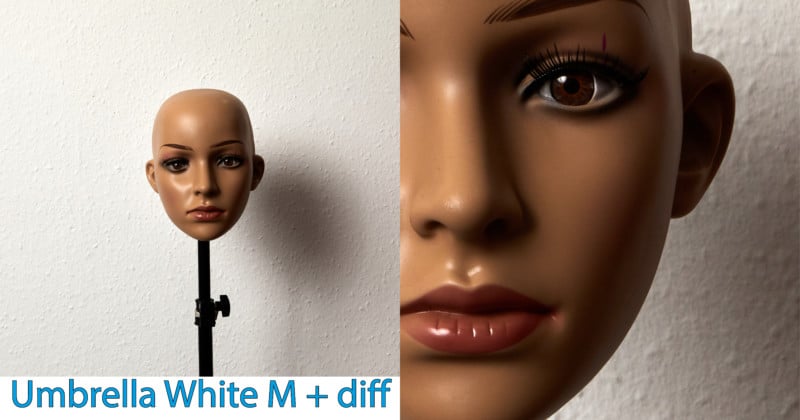 The biggest light modifier in my fleet is the 165cm (65”) umbrella. A large source will produce very soft light, while a white surface will make it bounced. The size of this modifier means that there is not a lot of contrast, and the shadow to highlight gradations are very long. Just by looking at the shadow on the wall, you can see that it is minute. This modifier is often used in my work as a fill light, or as a key for full-body images. Placed far enough, it can produce a light that doesn’t have any thrown shadows at all. Another application of a large light source like this one would be for e-commerce work where everything is shot against a white background and shadows are not welcome on it. 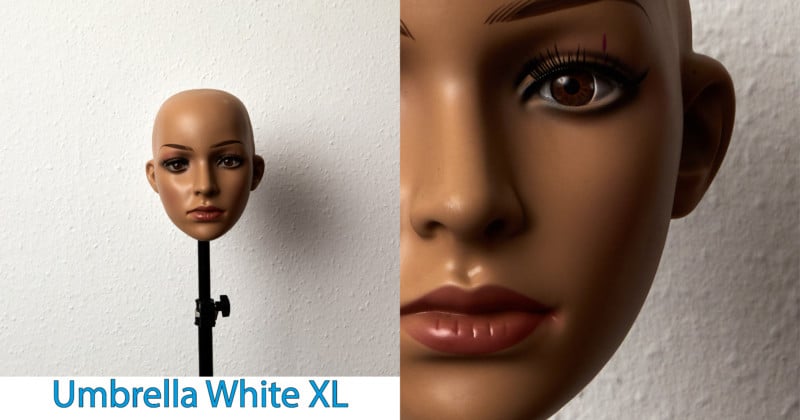 Adding a diffusor to the large umbrella does the same job as the one with a smaller modifier. It reduced contrast and almost eliminated clipping. The diffuser is helpful when creating fill light. Most of the time, I use the xl umbrella with a diffusor, as it is just that bit better. 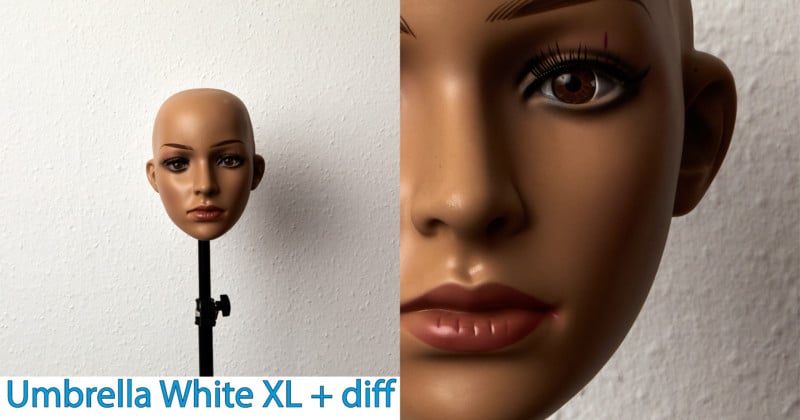 There are hundreds of more modifiers, and I will be doing my best to show what each does in the future. Still, knowing when to use a softbox and when an umbrella can be instrumental to you have a diverse portfolio that can impress clients.