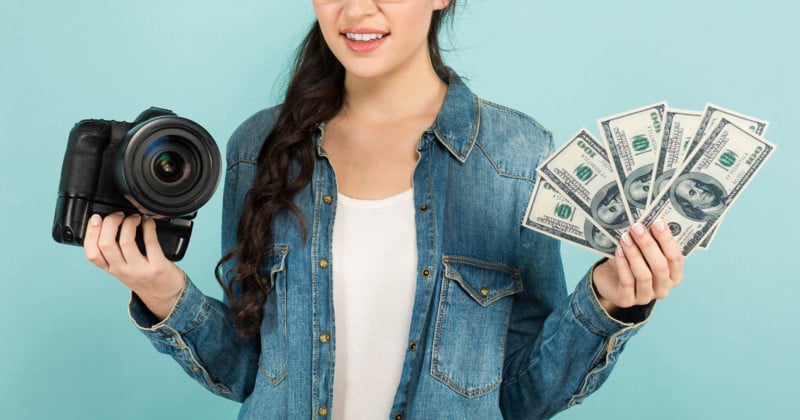 Over the next ten years, the number of photographers is expected to grow by 17%, or more than double the average growth rate for all industries, according to the U.S. Bureau of Labor Statistics (BLS).


These figures suggest the demand for photographers is still strong and growing, especially after the challenges of the COVID-19 pandemic.

But how much do photographers actually make? Here is everything you need to know.

How Much Does the Typical Photographer Make?

So how much does the typical working photographer make in the United States? Well, that depends on who you ask.

When the salary is median, however, it means the wage at which half the workers in an occupation earned more than that amount and half earned less.

However, Salary.com, which collects data from employer surveys, puts the figure somewhat higher. According to salary.com, the average income for a photographer is $56,168 annually.

Meanwhile, the employment website, Indeed.com collected data from over 6,300 photographers and estimated that the average salary for a photographer in the United States was a little lower at $51,946 per year.

The website glassdoor.com, where current and former employees anonymously review companies, estimates the average base pay of a photographer to be $46,922 annually, in a range that spans from $24,000 at the low end to $91,000 at the top end. 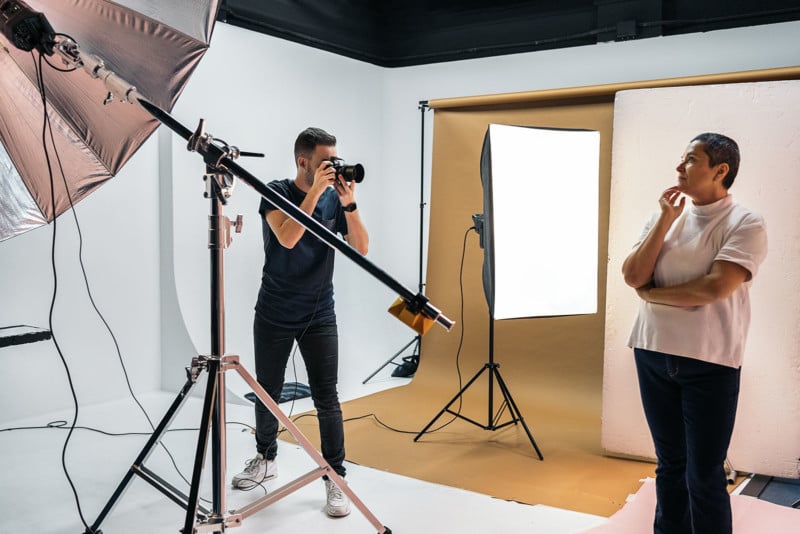 The BLS estimates that over 64% of photographers in the U.S are self-employed. Given this fact, the range for a freelance photographer’s salary could likely be far more expansive and could vary greatly depending on their skill set, experience, and if they keep their schedule full.

In another survey on glassdoor.com, the website estimated that the average salary for a self-employed photographer was higher at $52,138 per year — and freelance photographers could make anywhere up to $390,547 per year.

Read also: How a Photographer Turned a $45K Investment into $177K Annual Career

Self-employed photographers may also supplement their salary with other sources of income. The State of the Photography Industry Survey, which interviewed 3,300 global photographers in May 2021, found that over 35.1% of respondents were also offering video services, often considered to be a growing business segment. However, the majority of the survey’s respondents (64.5%) stick full-time to photography.

Where Do Photographers Earn the Most?

The latest data reveals that where a photographer resides in the U.S. is likely to have a significant impact on what they earn. According to the BLS, the state that boasts the highest employment for photographers is California with over 5,220 photographers. 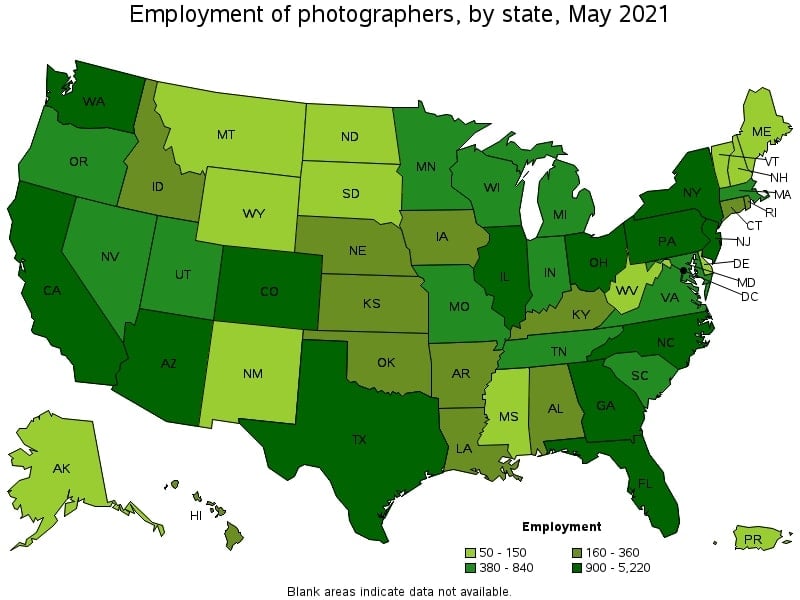 But while photographers are particularly in demand in these five states, that does not mean they are necessarily the highest paid in their profession in the U.S.

The top paying territory for employed photographers is the District of Columbia (D.C.) with an hourly mean wage of $40.67 which translates to an average annual salary of $84,590. 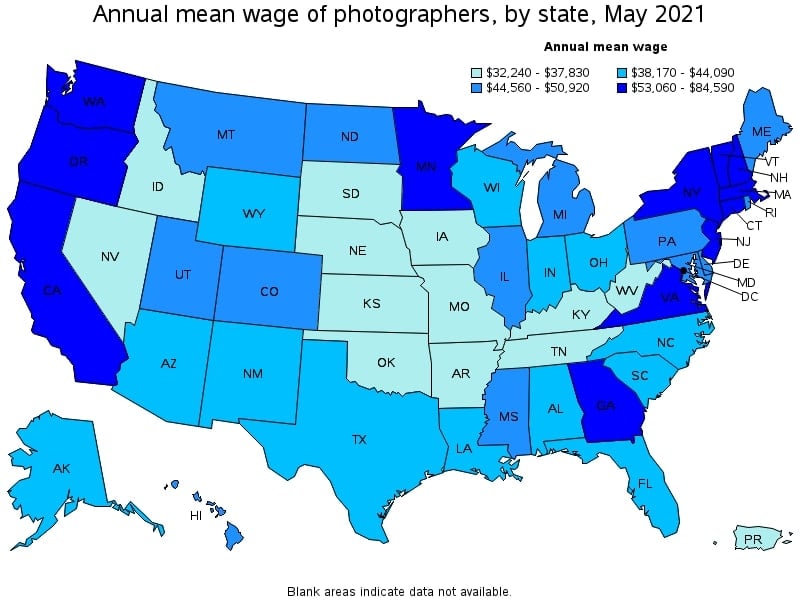 If you want to go beyond states and look even closer at top-paying metropolitan areas for photographers in the U.S., those employed in the San Jose-Sunnyvale-Santa Clara area in the state of California earn the most on average in the country, with a mean annual wage of $76,810.

The average yearly wage for photographers in the Bridgeport-Stamford-Norwalk area of Connecticut is $71,160 while photographers employed in the Washington-Arlington-Alexandria area centered in Washington, D.C. have an annual mean salary of $70,440.

Summary: Coastal states in the U.S. tend to have above-average photographer earnings, with Minnesota being an outlier.

What Types of Photographers Make the Most?

According to Climb — which collects data from various salary aggregate websites including ZipRecruiter, Indeed.com, Salary.com and Glassdoor — wedding photographers rank as one of the highest paying photography jobs in the U.S. They earn between between $36,758 and $126,379, with an average salary of $67,751. 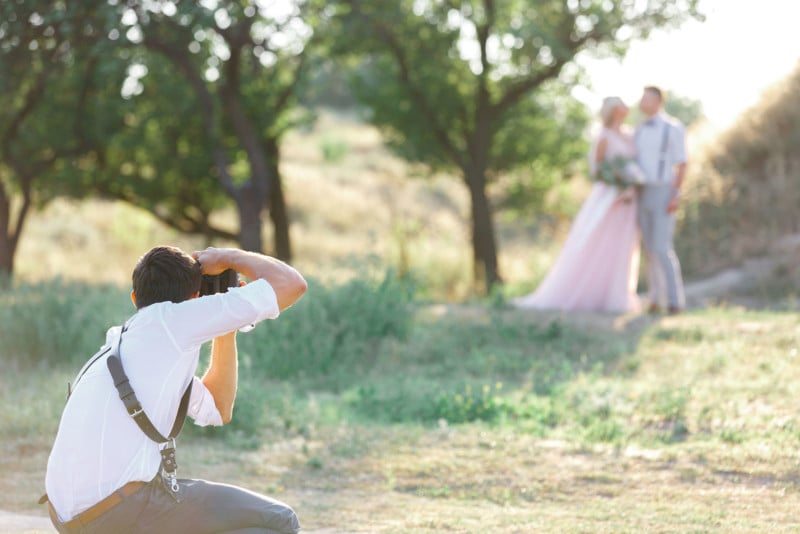 Fash, an online service that connects customers with local professionals in the U.S., estimates that the top 10% of professional photographers on their website earn $6,400 per month or more, particularly wedding photographers.

Fash says that average wedding photography prices on the website range from $1,500 to $3,500, while a professional destination-wedding photographer could start their pricing at $10,000 for a shoot. TheKnot, Brides, and WeddingWire agree with those numbers, reporting that the average cost of wedding photography in the US is in the range of $2,500 to $4,000.

ZipRecruiter’s list of average wedding photographer salaries by US state has Hawaii as the most lucrative place to set up your business as a wedding shooter, with an average annual salary of $135,215. The least? Louisiana, with an average of $88,780. 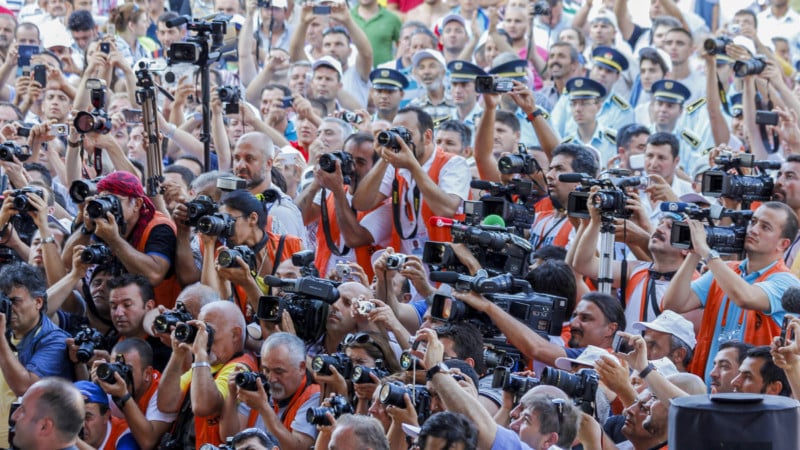 What Does the Earning Potential Look Like for Photographers in the Future?

The Economic Research Institute estimates that the average salary for photographers in the U.S. will increase by 11% in the next five years.

The State of the Photography Industry Survey, conducted in May 2021, found that 57% of photographers felt “good” about 2022 and expected business to pick up after the challenges of the COVID-19 pandemic. 32% of respondents believed business would remain at current levels, while a minority of 11% expected a decline.

This optimism toward the future of the industry appears to be supported by data. According to the BLS, about 12,700 openings for photographers are projected each year in the U.S, on average, over the next decade — with the employment of self-employed photographers forecasted to grow throughout the decade.

The demand for portrait photographers as well as commercial photographers is expected to remain strong. Although the BLS does speculate as to whether the decreasing cost of digital cameras and the increasing number of amateur photographers and hobbyists may reduce the need for professional photographers.

Overall employment trends slightly favor self-employed photographers over those who secure traditional full-time employment, so if you have been thinking of turning pro as a photographer, now seems to be as good a time as any to take the plunge.