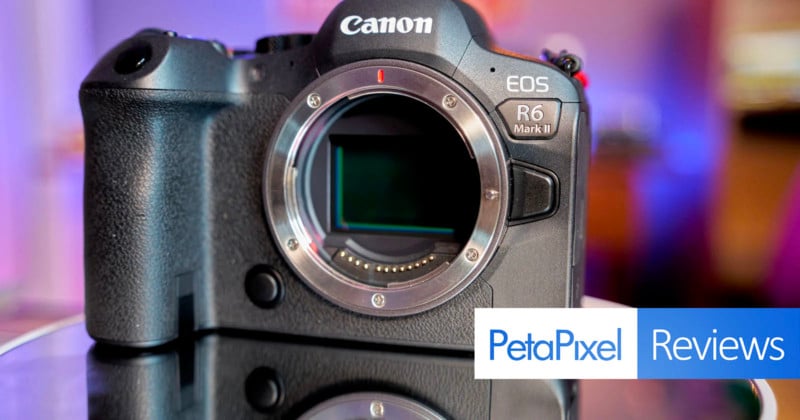 Canon’s EOS R6 Mark II is a major yet, in some ways, a subtle upgrade over the original R6. The new R6 Mark II is faster and more capable than the R6 in most regards, and it addresses several of the limitations found in the original model.

While the R6 Mark II closes the gap between the R6 line and the current R3 flagship and targets the advanced enthusiast customer, in many ways, this is a much more “professional” camera than its predecessor — at least for still photographers. Video functionality is improved, though some issues with video autofocus remain from the original R6, and in video use, the camera feels less polished than it does for stills.

The most significant advancement in the R6 Mark II comes in autofocus and frame rate. In the latter, the R6 Mark II surpasses even the Canon EOS R3, with the Mark II capturing 40 frames per second (fps) and the R3 capturing 30 fps. (The R3 can capture up to 195 fps for bursts of up to 50 images as of the most recent firmware, but this isn’t the camera’s typical operating speed.)

The mechanical shutter speed remains at 12fps, and the quiet shutter is barely audible during shooting.

Externally, the Canon EOS R6 Mark II is virtually identical to the R6, save for the rearrangement of some of the controls. The on/off switch has been (thankfully) moved from the left of the camera to just behind the shutter release, allowing for one-handed operation.

In its place, the left-hand side of the camera is now home to a dedicated control to switch between photo and video modes. This can be confusing for the existing R5 or R6 shooter, thanks to muscle memory, but it’s better to have the power controls on the right hand for faster camera activation.

The hot shoe is now a digital interface for direct-digital connections for audio devices, allowing audio input with no 3.5mm jack and (theoretically) higher fidelity. 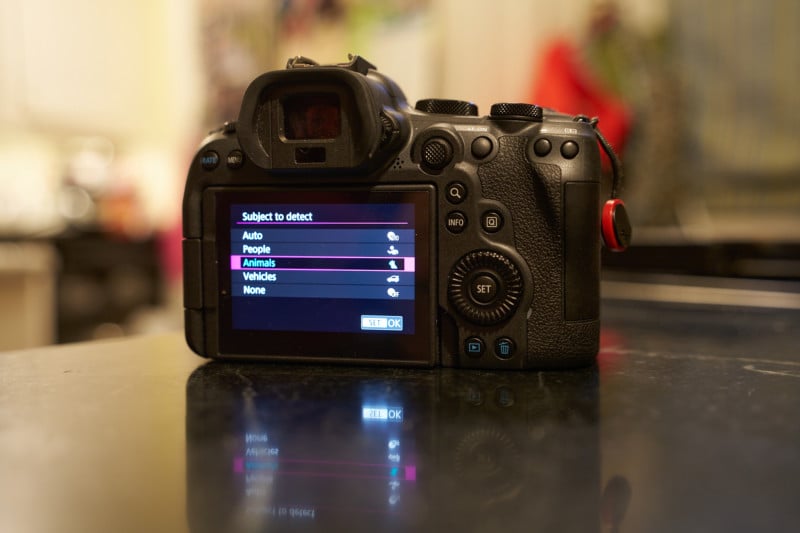 Connectors and ports are the same, including the micro HDMI connector, which makes the Canon R6 Mark II less ideal for video work than for photography.

If you’re a fan of Canon’s body design, the Canon EOS R6 II will be as comfortable to use as the R6, and the new camera is even (ever so slightly by 10 grams) lighter than the original.

That Canon achieved this with a bump in resolution from 20 megapixels to 24 is all the more impressive. Resolution-wise it’s not a huge upgrade but the R6 Mark II, but it shows the effects of Canon’s processor upgrades.

The electronic shutter can now function up to 1/16,000, although only in shutter priority and manual modes. Video recording now has shutter speeds of up to 1/8000 (from the previous 1/4000), but this has some limited application.

The R6 Mark II can record 6K/60p video (via HDMI), 4K/60p 10-bit, and HD up to 180fps (up from 120fps). Newly added focus-breathing compensation will help video shooters maintain consistency across their footage.

Canon has added lens breathing compensation for video, and video recording is possible for up to six hours (versus the 30-minute clip limit still imposed on the R6.) 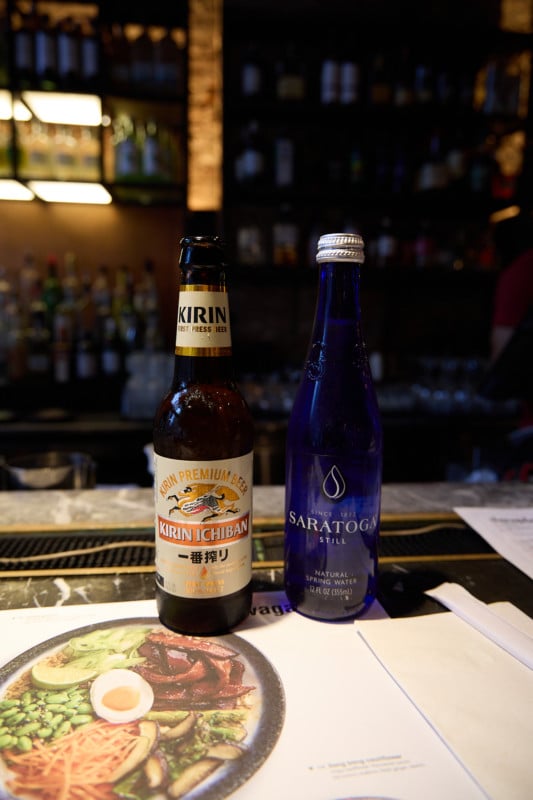 The Canon R6 Mark II still uses SD cards for storage, which is an odd choice given the blazing shutter speeds. An SD card is fine for most shooting, but at 40fps, I occasionally waited for the buffer to clear, something I no longer even think about on cameras with CFe cards.

Canon says that the camera has up to eight stops of image compensation, and there is electronic video compensation. 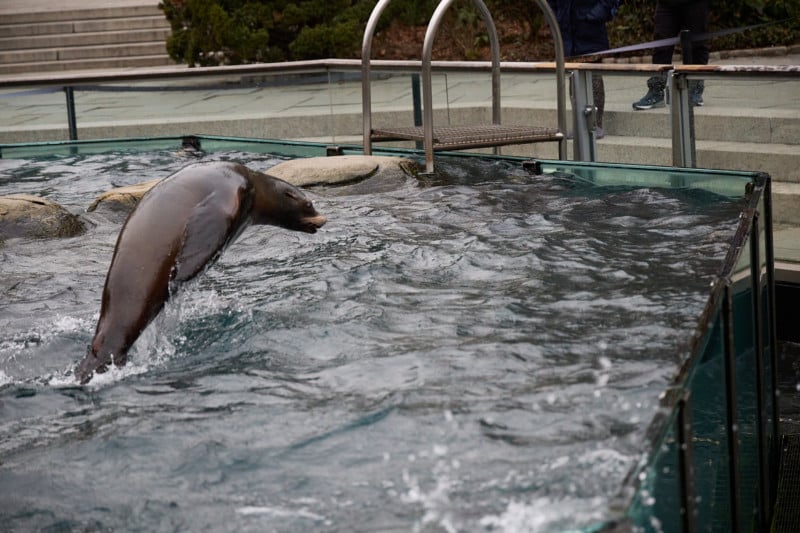 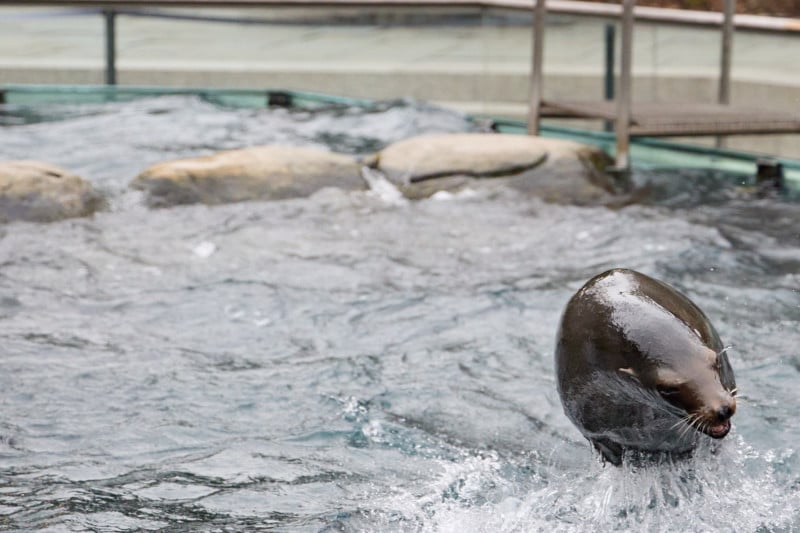 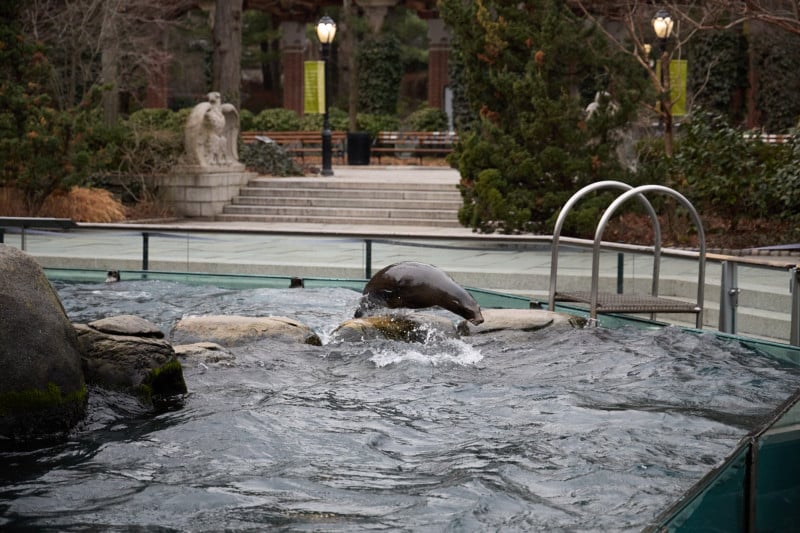 The battery is the same on the R6 Mark II as on the R6, with the new processor able to increase the number of shots capable at a charge. The previous R6 battery grip is also useable on the Canon R6 Mark II, providing significantly extended battery life.

The pre-roll buffer is one of the “I wish all cameras did this” features on the R6 II. The camera can live buffer images and record frames captured just before the shutter is pressed in both photo and video modes.

This is the one I wish for most often of all the features possible with digital cameras. As a former sports photographer, I’ve captured countless wasted images trying to pre-visualize when the decisive moment is about to happen because humans cannot process action as quickly as a camera can capture it.

Having the ability to capture frames just before my lowly human brain realizes something has happened is game-changing.

Both Major and Modest Improvements

The Canon EOS R6 II feels much more powerful and competent than the original R6. Operation is similar to the R6 but just feels faster and more competent.

The AI-based autofocus is particularly powerful, and if it were not for the new AI-based detection system on the Sony a7R V, it would be the most powerful AF on the market.

Canon’s autofocus has always been good, though the original EOS R was not on par with the competition at the time of its release. The Canon R6 now has corner-to-corner AF, and full-frame AF coverage makes shooting more accurate. 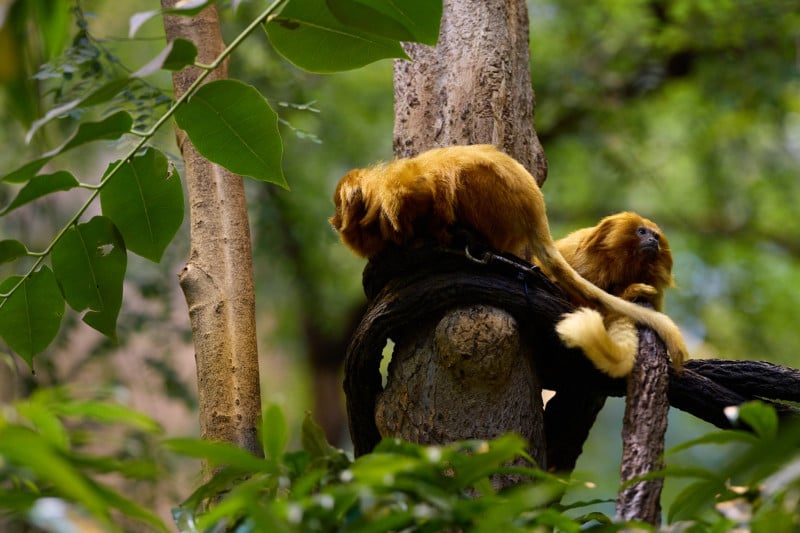 It’s amazing how quickly Canon has caught up to Sony regarding autofocus. The Canon R6 Mark II subject-recognition makes it debatably more capable at subject detection than the Sony a1 and just slightly behind the a7R V.

While it’s hard to make direct comparisons at the same scene, the Canon R6 Mark II has remarkable subject detection, though, for animals and birds, it’s more likely to find the body than the eyes.

In my tests with the Canon 135mm lens, there wasn’t always feedback to indicate that a subject’s eye was detected when it was nailing focus on animals and birds.

I’m not sure if this is a processor-power issue or something that needs to be perfected in the user interface. Still, the takeaway here is that the camera may be performing eye detection even if the outline only shows the subject.

Now that AI-based autofocus is becoming the new normal in cameras, it will be interesting to see the camera companies battle to be the king of the next generation of autofocus. I feel like we’re about to see a repeat of the camera sensor wars, but with focus.

I have to say, I’d prefer an AF war to a resolution war.

Canon is renowned for the quality of the images produced by its cameras, and the Canon EOS R6 Mark II is no exception. Colors render beautifully (what some people refer to as “color science,” though that’s not a thing), and there’s a crispness to in-camera JPEGs that’s the hallmark of Canon.

RAW converters for the R6 Mark II images weren’t available when I started testing it. Still, fortunately, the RAW files can now be processed in both Lightroom and Capture One, and the files hold up — as one would expect — incredibly well under scrutiny.

The R6 Mark II isn’t as good at nailing eyeballs as the Sony a7R V, but it is above the R6 in eye detection and accuracy and head-and-shoulders above Nikon and Fuji.

Petapixel’s Canon RF 135mm f/1.8 L USM lens review has more images from the Canon R6 Mark II, as does my YouTube review of that lens. Other image samples can be found in PetaPixel’s first impressions article. 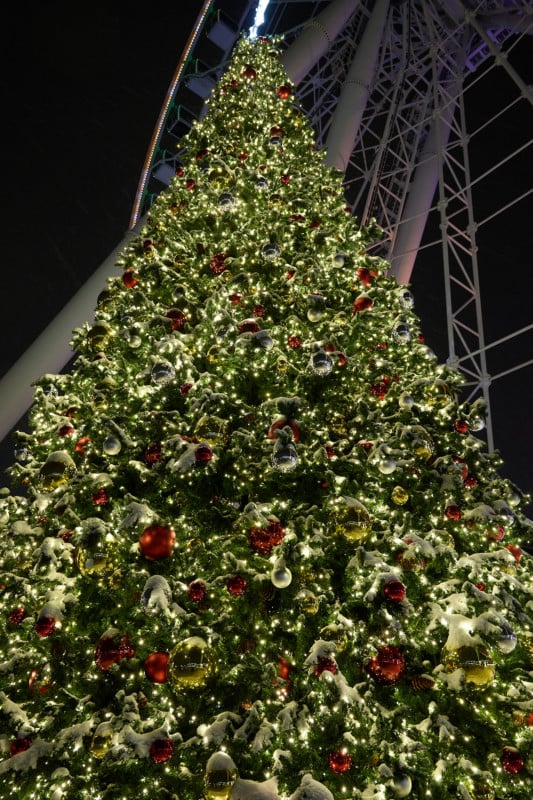 The Canon R6 Mark II has updated video capabilities compared to the R6. The biggest difference is the ability to capture 4K/60 at the full width of the sensor, something that will be incredibly helpful for videographers.

Canon says that the R6 Mark II can record about 40 minutes at 4k/60, though I’ve shot for about an hour before being satisfied with the record time and moving on.

As mentioned, the hot shoe is now a digital multi-function shoe designed for direct-digital connections with microphones and other video accessories. While I haven’t tried it, Canon says that the port is compatible with Apple MFi Lightning cables, allowing for direct video transfer of files to your phone via cable instead of over WiFi or Bluetooth.

Unfortunately, the HDMI cable isn’t a full-size HDMI, as is found on cameras from some competitors. The small HDMI cables are prone to falling out and breaking, and so many serious videographers rely on full-size HDMI ports to ensure a successful shoot.

Video AF isn’t as powerful as the still AF on the R6 Mark II, with the camera hunting more during video use than I would like. When set up in the studio, the R6 Mark II found and tracked my eyes with no problem, but I was stationary, which is to be expected. When filming moving subjects, the camera has a tendency to jump to horizontal or vertical lines in the background.

The R6 Mark II can now export 6K RAW or Super 35mm 3.7K raw using Apple ProRes to an Atomos recorder, although that support will come to Atomos recorders via a firmware update.

For $2,500, the Canon R6 Mark II is a big enough upgrade to make it worthwhile for any photographer who wants better subject detection autofocus and anyone who needs the fastest frame rates possible.

The combination of speed and resolution will make this camera ideal for sports photographers (though probably as a backup to their more-capable R3) and wedding and event photographers, as well as for photojournalists — however many of those are left these days.

The improvements to the video are excellent, though not enough to justify an upgrade unless 6K raw is needed. The 4K/60 full frame capabilities are excellent, but videographers that are currently okay with the crop won’t find enough in the R6 Mark II to justify the upgrade. 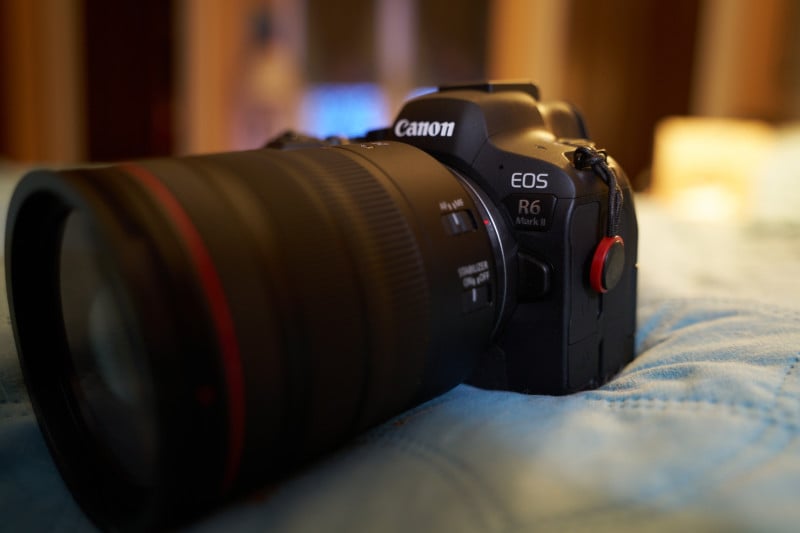 One alternative for Canon shooters that don’t need subject recognition or speed would be to use the Canon EOS R6.

While Sony generally offers direct competition to Canon for specific models, Canon’s price puts it closest to the a7 IV, a camera that’s starting to age and does not have the subject-recognition features of the Canon R6.

Sony’s closest competitor in terms of features is the a7R V, but that camera is 60MP, only can capture 10fps, and costs more than $1,000 more than the Canon EOS R6 II.

There’s nothing in the Nikon lineup that can shoot as fast or focus as accurately as the R6 Mark II, though Nikon’s Z6 II offers some of these features of the R6 at a lower price.

For video-centric shooters, Panasonic’s new S5 Mark II and S5 Mark IIX offer that company’s legendary video features in a body at a similar price (for the S5M2X) or lower price (S5M2) than the Canon R6 Mark II.

Yes. If you’re a Canon shooter with the original R and looking to upgrade, the Canon R6 II is a perfect choice and pro shooters with the Canon R3 will find tremendous value in using a Canon R6 II as a second/backup body.

For customers moving from other platforms, the R6 Mark II is a very well-rounded camera with just about every feature you could ask for, and it’s part of an ever-growing system of high-quality mirrorless photographic gear from Canon.