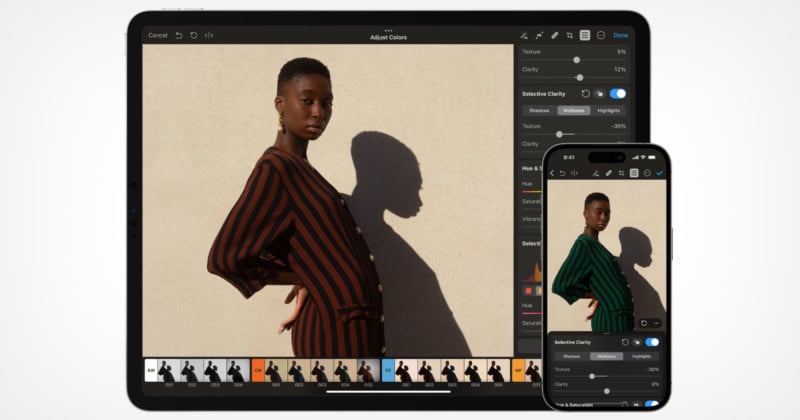 Pixelmator Photo has released what it calls a “major” update, headlined by all-new Clarity and Texture adjustments that it says allows photographers to improve the appearance of fine details using a texture-aware algorithm.

Pixelmator says that its new Clarity and Texture adjustments allow editors to “magically” enhance fine details and structure in photos, and each can make changes both big and small to objects in an image independently. As a result, the company says that this approach is a more intelligent and advanced way to increase sharpness and detail than what editors typically expect.

Clarity enhances textures, but Pixelmator says that it also will subtly adjust the brightness and colors of a photo to make the image look sharper and clearer overall. The company says that this approach typically can produce over or undersaturated images, but claims that its tool makes it so that this does not happen, regardless of how much an editor increases or decreases the Clarity slider.

In addition to these global change updates, Pixelmator Photo also has selective clarity adjustment which allows editors to adjust textures in the highlights, midtones, and shadows separately. The company says that editors can use the Selective Clarity adjustment by dragging it over areas of a photo, similar to on-image Curves adjustments.

Pixelmator says that this update also sees the complete rebuild of how the app handles shadow and highlight recovery, allowing for greater recovery in both.

“Because this is such a significant change, your previously edited photos will continue using the old implementation to make sure that they don’t look different when opened in the updated version of the app,” the company explains. “However, if you want to use the new implementation with previously edited shots, open the photo and make changes to it using any one of the Clarity, Texture, or Selective Clarity adjustments or simply reset all its adjustments, then re-edit it.”

In addition to these changes, the update — officially named Pixelmator Photo 2.2, which rolls out today — optimizes the editor to work faster and smoother thanks to color adjustment performance improvements. As a result, Pixelmator says the app is now up to two times faster.