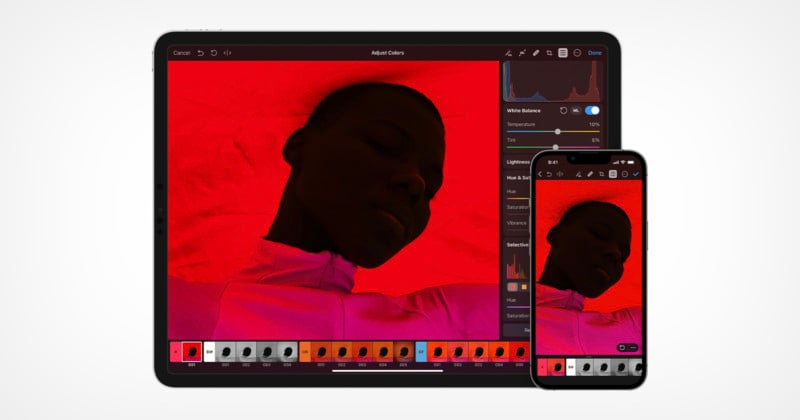 Pixelmator has announced Pixelmator Photo for iOS, what it calls the most powerful editor ever designed for a mobile device. The company even goes so far as to call it “basically Aperture for iPhone.”

Pixelmator Photo has been launched for iPhone (in addition to iPad) and features desktop-class color adjustments, support for over 600 RAW image formats — including Apple ProRAW — deep integration with the Photos app and iCloud Photos, tools powered by what the company calls groundbreaking machine learning technologies, and more.

The company says that Pixelmator Photo contains a collection of over 30 desktop-class color adjustments that allow editors to adjust the colors in a photo in a variety of ways. The app also features classic photography essential tools like White Balance, Exposure, Highlights, and Shadows adjustments, to more advanced tools like Selective Color, wheel-based Color Balance, photographic Grain adjustment, and others.

Pixelmator says that all the adjustments were designed using advanced image processing techniques that it says will preserve color quality and eliminate image posterization artifacts even when making “extreme” edits. All adjustments made in the app work directly and nondestructively with over 600 RAW image formats, including Apple ProRAW.

The app has what the company calls deep integration with the Photos app and iCloud Photos. To edit photos, users have to open it in the browser of the Pixelmator Photo app and when edits are finished, changes automatically sync with the photo library.

Each individual edit is preserved by Pixelmator Photo, so it is possible to make adjustments or revert changes one by one whenever the editor desires. The company says that it added a dedicated Share extension that makes easy to open images for editing directly from the Photos app as well.

The company says that the new app has “super-intelligent” tools that are powered by what it claims are groundbreaking machine learning technologies.

“To make it easier to start editing photos, the app includes an auto-enhance feature trained on 20 million pro photos that applies the most important basic edits to photos the way a pro photographer would,” the company says.

“In addition, there are AI-powered tools for upscaling photos while magically preserving sharpness and details, copying the look of one photo to another, removing camera noise and image compression artifacts, removing unwanted objects from images, and improving composition and framing. All the machine learning-powered tools are integrated using Core ML, for blazingly-fast performance on the latest iPhone models featuring the Apple Neural Engine for dedicated machine learning model processing.”

Below is an example of the object removal tool in action on iPhone:

Pixelmator Photo for iPhone also includes batch editing features that lets users edit entire photoshoots at once as well as copy and paste edits between photos. Also included are a collection of photographer-designed color adjustment presets that the company says were inspired by analog film photography, a split comparison view for comparing edits in close detail, and a Crop and Straighten tool.

In short, Pixelmator claims to have created an app with desktop-tier editing performance that is designed to run on and work seamlessly with iOS, on both iPhone and iPad.

The app is free for existing Pixelmator Photo users but is available for $4 for new users (it will eventually increase to $8) It requires iOS 14 or later, and full iPhone requirements can be found on the company’s website.