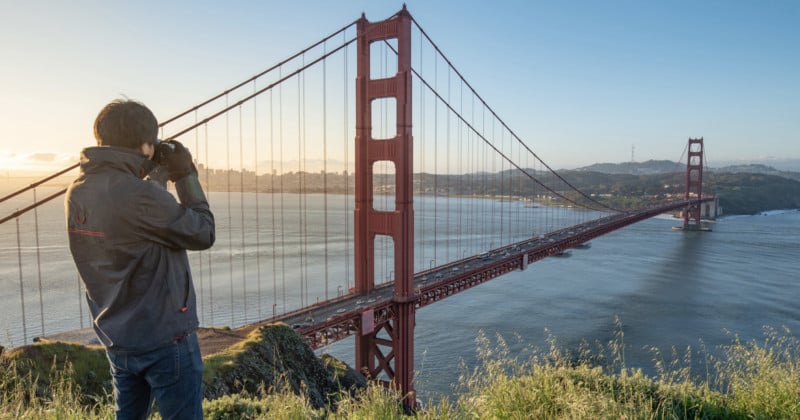 This past October, photographer Leon Kunstenaar was walking back to his car in downtown San Francisco after photographing a small demonstration. While loading his vehicle, a man appeared, pointed a gun at him, and demanded he hand over all of his equipment.

“Someone driving by saw the whole thing and stopped to help me… [and] called the police,” Kunstenaar tells PetaPixel. “They appeared in about 10 to 15 minutes.”

While the entire incident was captured on camera from a garage entrance across the street, the car and assailant were not able to be identified.

“Turns out they know the car had stolen plates and was a different car from one involved in a recent similar robbery at the Palace of Fine Arts,” he continues. “A few days later, someone from the city called me and offered counseling. He seemed utterly disinterested in what he was doing. My wife is a psychotherapist. I turned him down.”

Kunstenaar never recovered any of the stolen equipment, and while his insurance covered the camera and lens, it didn’t cover his memory cards, the backpack, or any of the miscellaneous accessories he carried with him.

In San Francisco, Kunstenaar’s story is, unfortunately, not unusual. The city has struggled with a rise in thefts against photographers for the last several years. But recently, those thefts have become more violent and far more brazen as thieves no longer feel the need to attempt robberies under the cover of darkness.

Just this past week, the Leica Store in Union Square was robbed of $178,000 in camera equipment. The thieves also caused $20,000 in damage during their three-minute smash-and-grab.

“Putting up signs reminding people not to leave valuables in their car isn’t going to make the problem go away,” Jefferson Graham, a PetaPixel contributor whose equipment was stolen while he was filming a segment in San Francisco last year, says.

“Arrests will. Jail time will. We need the city to admit it has a problem, and actually do something about it.”

The San Francisco Police Department (SFPD) pointed PetaPixel to its Personal Safety page in response to questions about what it intends to do about the rise in crime and violence against photographers. It added a few other platitudes such as, “we believe it takes the entire community to keep us safe” and “be aware of your surroundings.”

SFPD Police Chief William Scott did not respond to multiple requests for comment.

Staffing at the SFPD is reportedly at an all-time low. According to ABC7, the department has seen a drop of full-duty sworn officers since 2020 as many have either retired or quit. The California Globe reports the city will be down by upwards of 825 officers by the end of the year.

The office of San Francisco Mayor London Breed says she understands that the rise in attacks against photographers is a major problem, and adds that she is budgeting additional resources to hire more officers.

“The Mayor appreciates the role that photography plays in highlighting the beauty of the City and documenting the very important events, celebrations, and milestones of our visitors and residents and remains focused on ensuring San Francisco is a place where people want to live, visit, do business and work,” the Mayor’s office tells PetaPixel.

“Addressing public safety is our top priority and a vital part of the City’s economic recovery and vibrancy. She understands people are fed up and shares their frustrations, which is why the City’s new budget increased public safety investments to fill 200 vacant police officer positions, passed and implemented new laws to address unpermitted street vending to break up markets for stolen goods, and passed a new camera ordinance that allows the Police Department temporary access live camera footage as part of criminal investigations.”

Mayor Breed’s office is referring to a new city ordinance that it passed in September that allows the SFPD to access to live video feeds from privately owned security cameras in the city without a warrant, under certain circumstances. The policy was strongly opposed by a wide subset of community members and organizations, including the Bar Association of San Francisco, who were afraid the policy would allow for unchecked, mass surveillance and run roughshod over the privacy rights of locals and visitors.

“That is not a power that I feel comfortable giving,” Hillary Ronen, one of three city supervisors who voted against the ordinance, says.

“It feels to me like we’re yet again giving away more power for, in this case, the police department to surveil our activities when we’re expressing our opinion against the government. That’s becoming a scarier and scarier thing to do in this country.”

San Francisco also just passed a law allowing the use of deadly force by police robots.

Other Issues Need to be Resolved

While Mayor Breed agrees that more police will help, she knows that alone won’t fix the issue.

San Francisco recently elected Brooke Jenkins to her own term as District Attorney (DA) of the city. Jenkins, who previously was appointed to the role by Mayor Breed after former DA Chesa Boudin was recalled in June. Jenkins ran on a platform of restoring accountability in the criminal justice system, and she said as much in an interview with PetaPixel.

“What I feel is that we got to as a law enforcement agency, do more. We have to not only step up our presence — and I’m speaking for the police in this regard and I’m not in a position to govern them — but we have to step up their presence in high-profile locations and where photographers go to take photos. We have to build accountability and consequences for this type of action,” DA Jenkins says.

“So not only put up a deterrent from a punitive standpoint but also as a deterrent before we get there. We have to get people to understand that this is no longer something we will tolerate.”

San Francisco’s newly-elected District Attorney says that it is her goal to return to a period of time where violent crime is taken seriously by the city’s law enforcement. This past April, the SFPD blamed Jenkins’s predecessor Chesa Boudin for the rise in crime, saying they believed that his office wouldn’t prosecute cases to the fullest extent, instead releasing those who got arrested back onto the streets, where they would commit the same crimes. Boudin blamed the police department, saying they made arrests on less than 1% of car break-ins in 2021.

Hearing about this back-and-forth finger-pointing frustrated a number of San Francisco photographers PetaPixel spoke to.

DA Jenkins says that prior to Boudin and under District Attorney George Gascón, these types of crimes were taken more seriously.

“If it was a violent crime, we had the ability to ensure that we had the necessary consequences for it,” she says. “We have seen a decline in that for the last two and a half years which does not promote or function as a deterrent.”

DA Jenkins adds that it is her goal to get back to where consequences are proportional to the crime.

“People come here taking photos of the city, and we have to protect that. We have a job to protect that. For me, it’s bringing back the proportional consequences that go with those robberies.”

She adds that the city has a program that allows young people, namely those aged 18 to 25, to avoid incarceration after a first offense by going through an intensive set of programming. She adds that in recent years, the city wasn’t doing a good job ensuring that they were completing that programming, and adds that it is her goal to do that and if they do not, they would be shifted to more punitive consequences.

“We were letting people in these programs and not overseeing their success, and that is what has been lacking for some time,” DA Jenkins says. “There have to be serious consequences, certainly for repeat offenders.”

DA Jenkins says that her office is currently overwhelmed as its general felony unit is overloaded. Each attorney in that unit has, at minimum, 150 cases, which she says is just too much. She says she hopes a budget request to obtain six or seven more attorneys goes through so that she can transfer some of those cases to a Major Crimes division. That division would then be able to go after the larger cartels that operate in the city, where they target groups of photographers and rob multiple people a day.

“What I have to do when we go back to the board for our budget, we need more attorneys, period,” she says.

DA Jenkins also expressed support for posting more police in high-profile areas rather than just relying on drive-by patrols. That, though, is up to the police department and is no guarantee against violence; the Leica Store robbery took place near Union Square, where the police already have an increased presence. Again, SFPD Police Chief William Scott did not respond to multiple requests for comment.

Photographers such as Kunstenaar and Graham were unaware of some of the policies in the city prior to the election of DA Jenkins, but both agree that whatever the case is on a political level, something needs to change.

“It’s all a question of degree, the devil is in the details. More policing could improve the situation if they do a good job of it,” Kunstenaar says.

“They could be more proactive,” he suggests. “They often show up at demonstrations, they could also accompany photographers back to cars/public transportation. There are known areas of the City where stolen stuff is sold. They could pose as buyers, like they do with drugs.”

Graham says that not only does the city need to take crime more seriously, but camera companies and the websites for second-hand sales need to as well.

“Putting in remote sensors that can lock a camera when stolen, like we can do with cellphones [would help],” Graham says. “And Craigslist, eBay, and the rest need to change the way they do business with second-hand goods. Serial numbers and proof of ownership should be required to be shown before they can post products for sale.”

For his part, Kunstenaar isn’t waiting around for the city to do what he believes is necessary on its own. He and a group of other photographers have formed a new organization called The Bay Area Photographers Safety Group with the hope of banding together enough support to put more pressure on the city to make the changes necessary to keep them protected.

“We invite you to join us,” the organization writes in a letter to interested photographers. “The only requirement is that you have a desire to participate to whatever degree you find comfortable in helping us lower the danger to all of us who love to create meaningful images.”