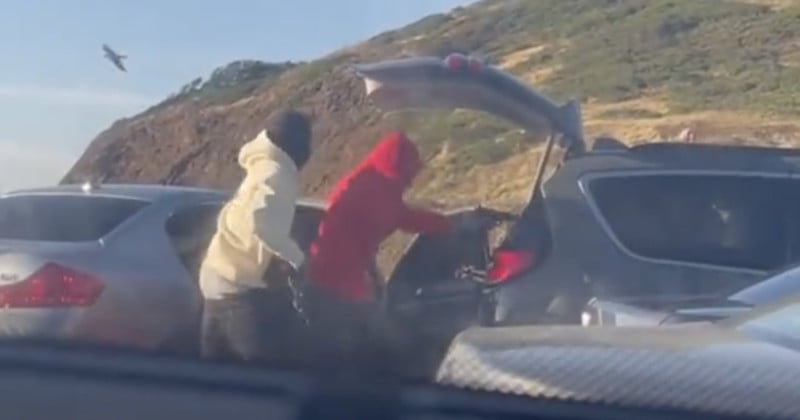 A Canadian film crew was robbed at gunpoint in broad daylight at San Francisco’s Twin Peaks parking lot on Friday. A group of attackers took their cameras and footage and, in a video, one can be seen pistol-whipping a victim.

According to NBC Bay Area News, police are investigating the incident which took place Friday evening. The encounter was captured on video and posted on Instagram and Twitter. One account that shared the video claims the crew of three Canadian filmmakers lost $35,000 worth of camera equipment and all of their footage as a result of the robbery.

At the beginning of the video, one of the robbers can be seen brandishing a handgun and pistol-whipping one of the victims in the back of the head as his accomplices quickly take the equipment out of the back of the crew’s SUV and load it into their car.

During the 49-second video, the robbers’ license plate is clearly visible which should aid in their arrest, but police have not commented on the ongoing investigation other than they are aware of the encounter and has asked anyone with information to call the department at 415-574-444 or text them at “TIP411.”

Twin Peaks is Rife with Theft

Twin Peaks is a notoriously dangerous area for photographers and filmmakers. Local crews that are hired to shoot footage from the area, which has one of the best views of downtown San Francisco and nearly the entire length of Market Street, generally hire security teams in order to assure their safety. However, that is sometimes not enough as one news crew’s security guard was shot and killed during an altercation in the Bay Area last November.

Last year, a local news crew was robbed while filming an interview about robberies in Twin Peaks.

NBC spoke with Kenan Al-Bardan, a Chicago tourist visiting Twin Peaks during the time of the robbery, who said that he’s well aware of the reputation of the area.

“My friend got a car and we don’t leave anything in the car, for sure,” he said. “I don’t hold cash. I don’t have a car. I’m a tourist and try to take public transportation.”

“You just never know who is lurking around, especially up here,” Vinlaun said, and told reporters that she never leaves anything in her car, something her roommate learned the hard way.

“Her window got smashed right there over by the parking lot. Be really careful out here. You never know what you’re going to get.”

With robberies so common and with attacks becoming more brazen, many have called on camera companies to add some level of security to their products.

Another photographer robbed at gunpoint: https://t.co/TGS2vEwSqS

Every smartphone has anti-theft, why won't camera manufacturers give us the OPTION?

“Every smartphone has anti-theft, why won’t camera manufacturers give us the option?” photographer and YouTuber Tony Northrup tweeted in response to this latest attack. “Why won’t they even talk to us about it?”

There have been multiple calls to secure cameras with some kind of anti-theft system in recent months, but no major manufacturers have publicly responded to the requests.

Alice Camera, the company behind the AI and deep-learning camera system that was successfully crowdfunded last year, says it is “looking into” such a feature. But until that happens, cameras will remain one of the most high-value products that can easily be stolen and quickly flipped.