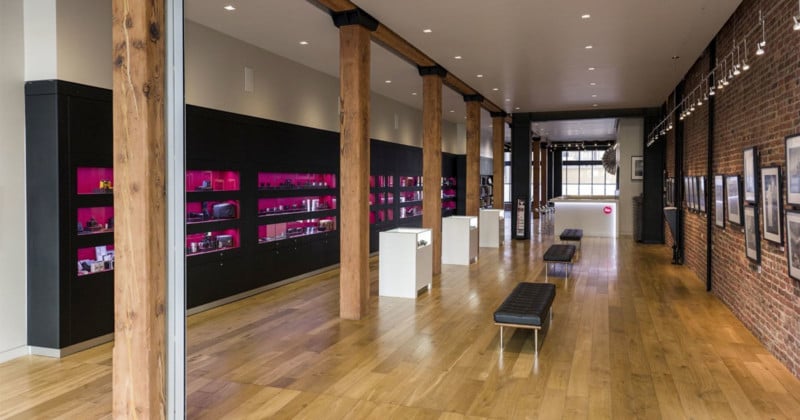 A group of four robbers, at least one of them armed, stole $178,000 in camera equipment and caused $20,000 in damage to the Leica Store near Union Square in San Francisco over the weekend.

According to ABC7, surveillance video shows four thieves — at least one of them armed — exiting a gray sedan around 1:20 PM on Saturday and entering the store where they proceeded to smash display cases and make off with nearly $180,000 in camera equipment less than three minutes later.

The surveillance camera footage shared by ABC7 shows the vehicle’s rear, although it is unclear if the license plate is visible.

Not much other information has been shared. Of note, the SF Chronicle reports that the armed robbery comes just a week after both Mayor London Breed and San Francisco Police Department Chief Bill Scott assured locals that the area was safe for holiday shopping and urged them to return. ABC7 reports that the pleas appear to be working as the area has seen more traffic over compared to last year, but despite the increase in police presence, the smash-and-grab robberies that have plagued the area for at least the last year are clearly a problem.

Camera equipment has proven to be a high-priority target for thieves in San Francisco. Since the equipment cannot be locked by an owner like smartphones, tablets, and computers can, they tend to be much more tantalizing considering their high value. That means that photographers are often targeted, especially in the city by the bay.

While the problem has been widespread in the city for several years, recent high-profile robberies — such as the armed robbery near the Palace of Fine Arts earlier this month — have put the city’s crime problem in the spotlight. While the city has posted more police at areas where these crimes are more common, that doesn’t necessarily deter thieves. For example, Union Square where the Leica Store is located is one such place where there is already a higher police presence.

Thieves are becoming more brazen as well. Many recent assaults on photographers and their equipment have happened in broad daylight. In addition to the Leica Store robbery which happened in the early afternoon, so did the attack at the Palace of Fine arts as well as a separate armed robbery near the Golden Gate Bridge where a camera crew was robbed of $35,000 in equipment in March.

There doesn’t seem to be a place where photographers aren’t targeted. Some have been attacked while stuck in traffic, another was shot by robbers after refusing to give up her camera, and last October a photographer was followed home and robbed of his gear at gunpoint.