A San Francisco-based photographer was recently followed home after shooting at the Golden Gate Bridge and then robbed of his camera equipment at gunpoint in his driveway. The terrifying incident was caught on home security cameras.


In the 23-minute video above by Tony & Chelsea Northrup, photographer Louis Chan shares the story of how he became one of the latest Bay Area photographers to fall victim to a camera robbery.

Chan says he and a friend were shooting the Golden Gate Bridge in fog from the popular Battery Spencer lookout point when they noticed a couple of men watching them.

“It’s a cautious thing that you have to do nowadays in San Francisco, unfortunately,” Chan tells Chelsea Northrup. “There are many, many, many cases of like people getting robbed [and] shot for their camera gear.”

Chan finished shooting and left the area at around 8 pm and got home about an hour later after dropping his friend off. He backed into his driveway to get it in position for charging and was chatting with a colleague when, out of the corner of his eye, he noticed two men walk up to his car.

The first man strolled right up to the driver-side window and knocked on it. When Chan rolled it down an inch, the man asked him which direction the freeway was.

“I’m like, ‘who would ask which direction is the freeway?’ and immediately like a second later in my head, I’m like ‘okay there’s something wrong,’ and that’s when I see the second guy kind of run through my periphery,” Chan tells Northrup. “That’s when I hit lock in the car [and] I hit the [horn] super fast to make a lot of noise. And at the same time I’m trying to hold the brake and hit drive, trying to escape because I know what’s happening.”

Despite Chan trying to draw attention to the robbery in progress, the second man proceeded to press a tool into Chan’s rear windshield, shatter the glass, grab the camera bag in the trunk, and run away. 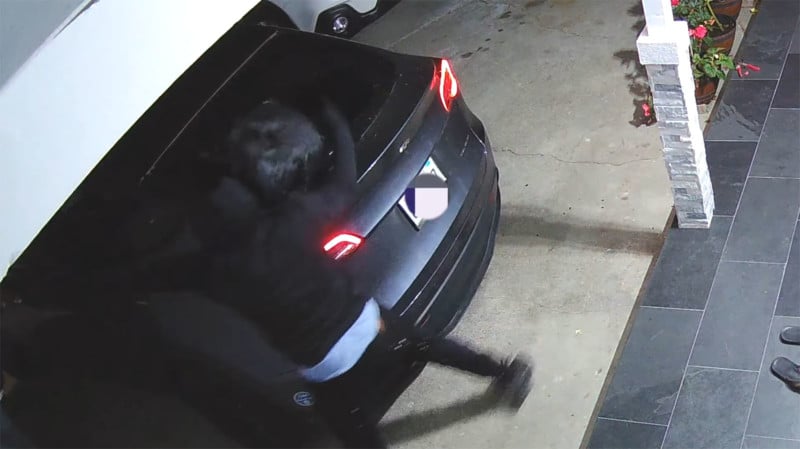 It is never advisable to chase robbers — life is infinitely more valuable than possessions — but Chan, in a moment of fight or flight response, stepped on his accelerator and nearly ran the robbers over. His Tesla was only prevented from doing so by a row of cinderblocks that Chan’s father had put in the front yard.

But Chan didn’t stop there.

After getting around the cinderblocks, Chan spotted the robbers next to their getaway car and then used his Tesla to ram the car and box it in.

“I was able to impact the rear driver side of the car like just right behind the wheel well and I hit the bumper really hard, and one side of the bumper basically just came right off.”

Chan then watched as the driver of the car walked in front of the Tesla with a gun pointed right at Chan.

Luckily for Chan, the man then got into the getaway car and sped away with the bumper being dragged across the road.

The man did fire one shot during the escape, purportedly at Chan’s family members who were running onto the scene, but thankfully no one was struck by the bullet.

Chan’s Tesla cameras had captured a clear view of both the crime and the getaway car’s license plate, and Chan soon learned that the driver/shooter had been captured and was in custody. The man is no stranger to the law — Chan did a search of his name and learned that he had robbed another professional photographer in San Francisco back in 2015 at the Palace of Fine Arts.

In that crime, the man had followed the photographer back to her car and repeatedly hit her in the head with his gun before fleeing with her camera equipment.

“They were caught, went to jail, and now he’s on federal probation, and now committing the same crime again,” Chan says.

“I hope that [Chan’s story] makes people more aware of the fact that this is a very real problem it can happen to them and they need to be prepared with insurance,” Northrup says. “Do not fight back, give them your stuff — nothing is worth your life.

“We also need to be prepared to help each other. You should be going out in groups, you should be trying to be safe even though it’s not really preventable 100%, and to try to be diligent and look around to make sure you’re not being followed and things like that.”

Image credits: All images by Louis Chan and used with permission