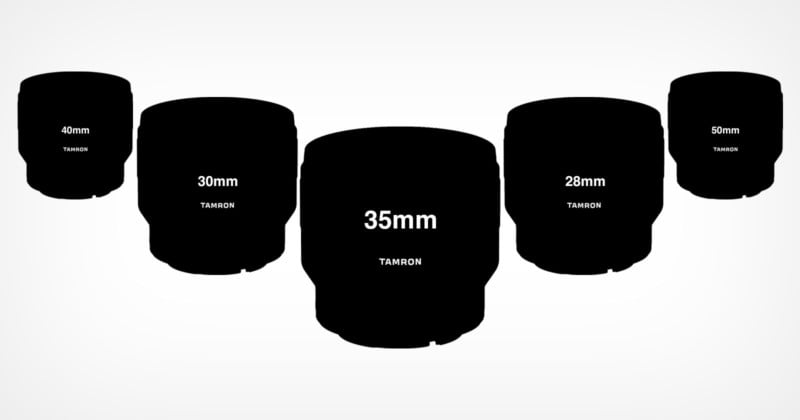 Tamron appears to be working on a series of fast f/1.4 prime lenses according to patents filed in Japan. These lenses would be the fastest the company has produced for mirrorless cameras and would expand the company’s rather small line of prime lenses.

The patents, spotted by Digicame Info, describe the 28mm, 30mm, 35mm, 40mm, and 50mm focal lengths, all of which would feature a wide-open aperture of f/1.4. While a patent filing does not necessarily mean that a company has any actual plans to release a product, seeing them is somewhat encouraging that Sony, Sigma, and Samyang might see some direct competition in the E-mount fast prime space from a large, established, and well-distributed lens manufacturer.

The 35mm f/1.8 for DSLRs was released way back in 2015 and was characterized by an extremely close focusing distance, a feature that made it stand apart from Sigma’s extremely popular 35mm f/1.4 Art lens even though it was slightly slower. Most importantly, it is sharp and is capable of producing stunning results.

Tamron followed that lens up with a faster 35mm f/1.4 in 2019 — which was wholeheartedly praised by experts — but has yet to make a mirrorless version of either lens.

Instead, the lens manufacturer released three f/2.8 wide-angle prime lenses in late 2019, the aforementioned 20mm, 24mm, and 35mm f/2.8 lenses. Over the next three years, Tamron would not release another prime lens, instead focusing its efforts on varying zooms. While these lenses have pretty much all been reviewed favorably — specifically the 18-300mm f/3.5-6.3, 50-400mm f/4.5-6.3, and 20-40mm f/2.8 — prime lenses are still extremely popular and there are likely many photographers who hope the company will revisit them, especially considering the performance of its previous endeavors remains generally highly regarded.

It’s hard to say how long photographers will have to wait if Tamron does intend to produce these: there are two ways to look at it. Given that these patents were filed at the end of October, they could be a long way off still as camera makers often file patents years in advance of release. At the same time, it is also possible Tamron decided to hold off on filing the patents until it was close to release in order to prevent showing its hand too early to competitors.