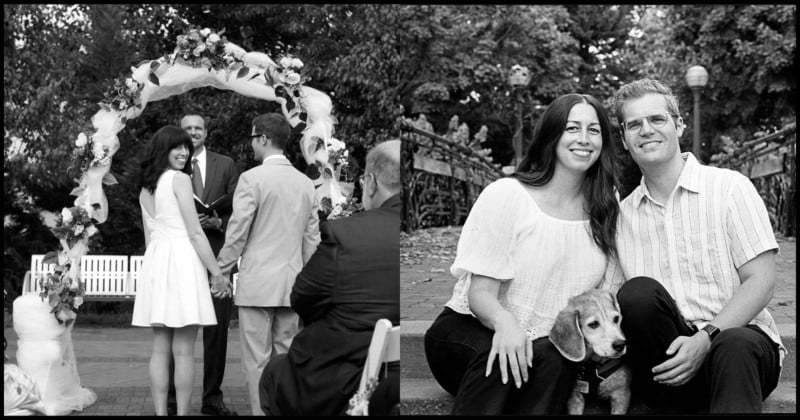 2012 was a helluva year for film photographers and a crossroads for me personally.


My wife and I had formally begun photographing weddings together only a year prior. She shot all digital because that’s her passion. And I was trying to shoot all B&W 35mm film like a crazy person, because that is my passion.

I say “trying,” because I used to think that it was necessary for me to shoot a mix of color film and digital for anyone to hire me. And in order to shoot color film, I had an intricate supply chain that was sent into a tailspin in January 2012 when Kodak filed for Chapter 11 bankruptcy.

It’s typically cheaper and easier for a working film photographer to have a lab do all their processing and scanning. The work can be done faster and more consistently by specialists. It used to be normal for professional photographers to be almost totally divorced from these tasks, particularly once a lab had the photographer’s technical and aesthetic preferences down.

But in 2012, it began taking me longer to deliver finished albums to our clients because I often had to compensate for various problems and difficulties that my once-trusted labs were causing.

Long-time employees were leaving or being let go and new ones were not being trained up fast enough. Corrections on scans were abysmal and inconsistent, making editing a surprise for each roll. Turnaround times increased. Unbelievably, some labs even resorted to running exhausted chemistry.

I think the morale of the entire film community was just really low then. We were all quite literally fighting to survive.

Thankfully, Stephanie and I had some exceedingly patient clients in 2012 who turned out to be more loyal to us than the labs that I’d dumped tens of thousands of dollars into over the years. One such couple was Brit and Steve who were enthusiastic to hire a film photographer.

Their wedding took place around the same time that a bankrupt Kodak announced that T-Max P3200 would be discontinued. This was the film that made my available light reception photography possible. It felt like film was about to keel over and my work was over before it really got started.

Brit and Steve’s wedding would be the last one I’d use T-Max P3200 at before switching to Ilford Delta 3200 for the next six years. In 2018, a much stronger Kodak re-introduced P3200 and kindly provided me with some of the first publicly released rolls to test. But back in 2012, scenarios like that seemed impossible.

I remember showing up to Brit and Steve’s pre-bridal with a DSLR because I was still shooting hybrid then. Steve leaned toward me and discreetly asked, “hey, you’re going to be shooting film too, right?” I always remembered this because it was one of the few projects from that time when someone was not questioning why I was shooting film but rather, making sure that I was.

The wedding took place on a decorative footbridge over Carroll Creek in Frederick, Maryland, adjacent to The Delaplaine Art Museum where the reception would be held. Years later, I’d display my work in an exhibit there with other local film photographers.

Brit and Steve’s ceremony and reception were simple and elegant, beautiful and emotional. My wife and I had that now-familiar feeling after a successful shoot that we had done some really good work. We were so grateful to be working with this couple. Their friends and family were fun also, and we photographed some of them at subsequent events – it’s always great when that happens.

And that is why it was such a terrible blow when I found that numerous rolls of my Fuji Acros 100 had been scanned with so much dust and debris that the usual Photoshop clone stamp wasn’t up for the task. Because the film was conventional, single-layer B&W, Digital ICE could not be used to clean up the scans. The negatives had been cut and sleeved so they couldn’t simply be rinsed and re-scanned via the lab’s Noritsu either.

I was hand-processing the T-Max P3200 from Brit and Steve’s reception myself because the same lab that messed up my Acros 100 had proved time and again that they couldn’t push process my film correctly either. So I added re-washing the cut strips of Acros and scanning them on my flatbed to my chores. I also upgraded to Adobe Photoshop Elements 7, which featured a Spot Healing Brush. Between this and re-rinsing, I was finally able to get all those spots off Brit and Steve’s images.

They were super patient and understanding of my delayed turnaround too. And when we shared the overdue photos with them, still with unshaken confidence in me, Brit recommended that “you should start your own film lab!” This was an amazingly kind response after the long wait I’d put them through, and such a profound relief after all of the additional effort I’d put into these photos.

Well, I didn’t go as far as starting my own lab to save film photography, but I made the leap away from shooting any digital or color film to 100% B&W 35mm and processing and scanning all of my own work. I still fully endorse using quality film labs but it turns out that this path was the best one for me to both sustain business and hone my particular look and style.

While it was challenging at first, nowadays I routinely process twenty or thirty rolls of B&W 35mm in my kitchen in about half a day. And I scan while I edit, which allows me to work pretty quickly and give myself feedback on processing and scanning QC as I go. Processing and scanning my own work has honestly become really fun. Doing the work myself, as many shooters now do, has given me confidence in the future of film.

One morning, months after their wedding, I took my daughter to breakfast at Cafe Nola in downtown Frederick, where I would also later show my work. We saw Brit sitting at a high top clicking away on her computer. She greeted us warmly and revealed that her desktop image was one of my favorite shots I’d taken of her. It’s one thing when clients are complimentary of your work after a shoot, but it’s entirely another thing when you see them living with and enjoying your photos in commonplace ways.

Eventually, Brit and Steve moved away from Maryland and disappeared into the list of good memories on my hard drives and in my old metal filing cabinets where I archive my film. But then, this year, I got a message from Brit saying that she and Steve were moving back to Frederick and they wanted Steph and me to take portraits for their tenth wedding anniversary. I was beyond thrilled. And seeing them again got me thinking about all that has changed both in film photography and in my photography over the last decade.

Kodak became Kodak Alaris and not only re-released T-Max P3200 but Ektachrome too. Fuji discontinued Acros and seems to have almost entirely pulled out of supporting 35mm film. Ilford has stood by quietly through all the drama and kept an even keel. Nikon stopped making film cameras altogether but Leica cannot seem to build them fast enough.

The Nikon cameras and lenses that I used to photograph Brit and Steve have since been serviced by my main repair guy before he retired. I’m sure they’ll be good for at least another decade. The Leica M6 that I bought back when film was at an all-time low has now more than doubled in value and was recently reissued by the company. The cost of film has ratcheted up but we can still get it, and to me, that’s the most important thing.

My wife and I are still going strong too. And so is our little photography business.

Because as it turns out, when you do what you love, success is inevitable.

Some people make fun of wedding photography or the very idea of doing paid work on film for that matter. But to me, this is a love story that I just can’t put down.

About the author: Johnny Martyr is an East Coast film photographer. The opinions expressed in this article are solely those of the author. After an adventurous 20-year photographic journey, he now shoots exclusively on B&W 35mm film that he painstakingly hand-processes and digitizes. Choosing to work with only a select few clients per annum, Martyr’s uncommonly personalized process ensures unsurpassed quality as well as stylish, natural & timeless imagery that will endure for decades. You can find more of his work on his website, Flickr, Facebook, and Instagram.