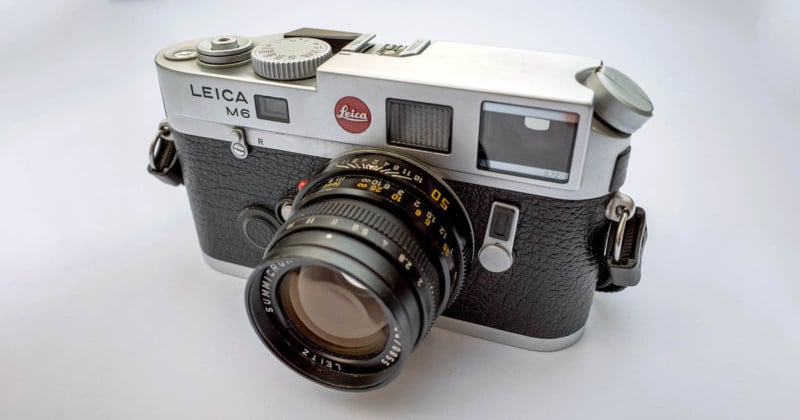 Many photographers are nostalgic for film. It might be the smell of the darkroom as you wait for your print to develop, the physically mechanical nature of shooting photos, or the skill required to bring home a decent photo.


However, not all cameras are created equal and while we might have a soft spot for the model we used to hone our craft, it’s possibly not the camera we’d choose to shoot with or just feel is an extension of our body. So why then is the Leica M6 35mm rangefinder from 1984 so universally loved?

A Brief History of Leica

Before we can understand the M6, we need to understand Leica. Leica, originally an optical company, was formed in 1849 by Ernst Leitz, but it was the creation of the prototype Ur-Leica (a portable unit designed to test motion picture film speed) by Leitz engineer Oscar Barnack in 1913 that proved to be a defining moment.

Barnack subsequently recognized that the advent of small, fast, lenses presented an opportunity to also develop a small camera. The innovation – besides recognizing this fact – was in taking 35mm reel film from the motion picture industry and passing it horizontally (rather than vertically) through a stills camera, matching the small film to a small lens. The revolutionary move away from plates and sheets had begun.

Leitz subsequently released the Leica 1 in 1925 which incorporated a fixed 50mm lens and was the weapon of choice for legendary French photographer Henri Cartier-Bresson. Perhaps more than any other camera, the Leica 2 was the innovation that the market was waiting for as it introduced interchangeable lenses and a rangefinder. You could more easily see what you were going to get and so the superior technical solution did away with the need for bulkier view cameras and twin-lens reflex (TLR) cameras — a view camera needs you to load the film after you’ve composed while a TLR doesn’t show you what the “taking lens” sees.

Then in 1954 Leica introduced the M3, which became its second defining moment and perhaps the most iconic camera ever produced.

In some ways, it’s odd that the camera was ever released given that the industry had seriously begun to pivot to the single-lens reflex (SLR) design after the war. This, coupled with the rise of Japanese manufacturers, ultimately led to the seminal release of the Nikon F in 1959.

However, the M3 finally made Leica’s rangefinders a compelling package. As part of a completely redesigned body (now with a wind lever!), Leica introduced a bayonet mount along with a combined viewfinder/rangefinder which automatically adjusted the framelines and corrected for parallax.

As ever with Leica, the manufacturing quality was high and the lenses exquisite. The M3 might have had some divergent design traits — such as the mechanism for loading the film by removing the bottom plate — but it is both a delight to hold and use. Again, strangely, the M3 was very successful for Leica, selling some 220,000 units when its production run ended in 1966.

I say strangely because the success of the SLR, as both a design concept and its implementation by Japanese manufacturers, meant that the rangefinder was replaced as the de facto standard, at least in terms of volume manufacturing. While the M3 was undoubtedly a financial success, remember that the Nikon F sold over three times as many (862,000) over a similar period of time.

What should have happened next was the incremental release of increasingly advanced models eventually leading to the M6 and R3. The reality was that Japanese manufacturers were innovating rapidly and developing sophisticated microelectronics and Leica was not.

Leica’s take on the SLR, the Leicaflex, was not commercially successful and the failure of the M5 to garner traction required drastic action for what had ostensibly been a lost decade where the competition had streaked ahead. That required the modernization of their camera designs and a return to a sure footing financially. The former they addressed through a partnership with Minolta, which was arguably leading in camera R&D at the time, and a re-badging of their SLR designs in the form of the R3.

The latter they achieved by immediately restarting production of the M4; originally released in 1967 as a direct successor to the M3, it saw limited changes to its progenitor and remained predominantly hand-built. However success came in the form of evolving the design to the M4-2 (and later M4-P) to incorporate more framelines, and support for hot shoe flash and motor wind. More importantly, production was moved to Leica’s Canadian subsidiary and the manufacturing process was streamlined; in short, Leica wanted the ability to build a better M3 at a lower cost.

Leica M6: The Pinnacle of Evolution?

So what was Leica’s goal for camera development? The first half of the 1970s was an interesting inflection point for the company with the release of the M5 and R3, the latter perhaps a response to the former. The M5 evolved from the M4, introducing TTL metering, and in the process becoming larger, heavier, and more expensive. It was rapidly shelved.

In 1972 Leica formally linked up with Minolta and used their expertise to release the R3 in 1976, which was a commercial success. The re-release of the M4 — and subsequent Canadian production — arguably saved both the rangefinder and Leica more generally, but the future of the design was far from secure.

The obvious evolution of the M4 was an M3-based form factor with TTL metering: a second bite of the TTL apple, to right the M5 wrongs. And so the M6 was born.

Leica learned from its mistakes and unsurprisingly the M6 doesn’t pull any punches. It is unashamedly based on the M4-P but introduced TTL metering in the form of LED indicators in the viewfinder. There are no automatic modes (which were introduced in the later M7), but that is not to its detriment. This is a manual camera with a built-in light meter, bringing everything that was loved about the M3 without making you guess exposure or whip out a handheld meter.

Now here’s the thing: a Leica M takes on a life of its own when you hold it in your hands. Leica realized that for journalism, the rangefinder was the only design that worked for many photographers. It was small, could be paired with class-leading lenses, was fast to focus, and was unobtrusive. It’s not only a joy to hold, but a joy to use, from the reassuringly exquisite manufacturing to the perfectly weighted shutter speed dial, canted film advance, and sharp viewfinder focusing.

In a world used to the SLR mirror box, having a viewfinder with framelines might seem antiquated — it’s not. Your eye knows it’s looking at a frame of the world and composes accordingly, accurately adjusting focus, before releasing the shutter. You can preset either the shutter speed or aperture, check the exposure, then adjust the other.

In the world of mirrorless cameras, we might expect the M6 to feel light and unbalanced. Again, it’s not. It weighs in at a pleasant 1.29 pounds (585g). It’s neither unduly light nor heavy, but well-balanced.

Perhaps this gets to the nub of why the M6 hits the pinnacle of film cameras: it doesn’t obstruct photo-making in the way an old view camera would, yet it refuses to automate the photographer out of the equation. The M6 and M5 both feature built-in light meters, but the M6 boasts a smaller and arguably more beautiful design as well as the culmination of three decades of Leica M rangefinder evolution. And compared to the heavily electronic Leica M7, the M6 is the last fully-manual Leica M rangefinder with the standard M# naming that leaves all decision-making to the photographer.

If M6 shooters are passionate, then it’s because the camera asks them to be in the moment, to make the photo, to become an instrumental part of the camera. Call it camera zen.

Where else can you attain the same level of connectedness?

The price of used Leica M6 rangefinder cameras has steadily marched upward over the past decades. While the camera could be purchased secondhand for less than $1,500 in the late 2000s and early 2010s, it can be difficult to find one these days for less than $2,500, and bodies in mint condition can sell for well over $3,000.

If you are in the market for a Leica M6, it’s important to know the variants that are available.

The first difference you’ll find is color. As with many Leica M models, the standard M6 was produced in silver and black versions. While the silver may carry the more iconic Leica M look, the black version is more discrete when shooting on the street and can be desirable for not attracting the attention of subjects (or robbers).

There are a few main variants of the M6 that were introduced over the years. After the original Leica M6 was unveiled in 1984, Leica announced the M6J in 1994. It was a limited-edition run of 1,640 bodies that celebrated the 40th anniversary of the Leica M line. This collectors camera introduced the 0.85x viewfinder magnification.

In 1998, Leica launched the M6 0.85x, a standard production version of the M6 that offered a new viewfinder that made it easier to accurately focus when shooting with long focal length or wide aperture lenses. After producing 3,130 units of the M6 0.85x, Leica introduced the new M6 TTL, which offered TTL flash capability and which eventually offered all three viewfinder magnifications during its 4-year run (0.58x, 0.72x, and 0.85x).

Both the original Leica M6 and M6 TTL can be found on used marketplaces for roughly the same prices. If purchasing from less reputable sources, such as a Facebook Marketplace or Craigslist transaction, make sure you know the standard tips for things you should check out in a secondhand film camera.

In October 2022, Leica announced a reboot of the Leica M6, so photographers now have the option to pick up a brand new camera instead of a secondhand one. The Leica M6 (2022) has a price tag of $5,295, which is a good deal more than the current prices of older generations on used marketplaces.

Hopefully this article was a helpful primer for understanding why the Leica M6 is such a legendary model in film camera history. If you have the desire and means to purchase one, we highly recommend it — the Leica M6 is definitely a holy grail of 35mm rangefinders.