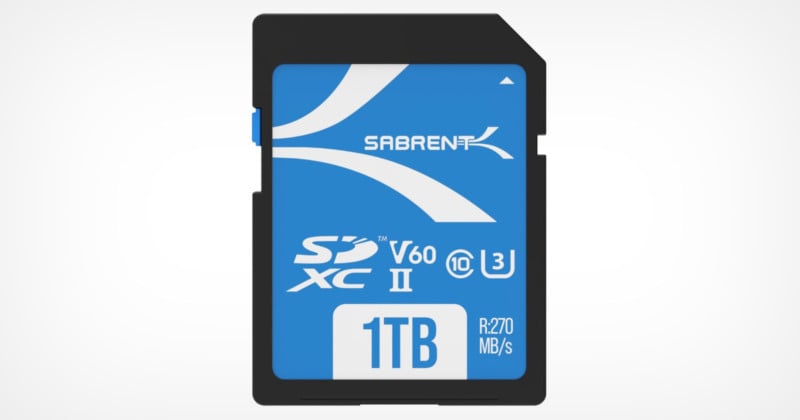 Sabrent has announced a new 1TB capacity option for its V60 SD card line, a rare combination of speed and capacity. Sabrent joins Angelbird as the only manufacturer that offers a V60, UHS-II card at 1TB.

The new SD card is advertised as ideal for 8K, 4K, and Full HD video capture and while the company boasts its new card controller, combined with 112-Layer BiCS5 TLC, allows for a 270 MB/s read speed and says that it has up to 170 MB/s write speeds, the card is only verified to meet the V60 standard, which means it can only sustain write speeds of 60 MB/s (if it were indeed able to sustain 170 MB/s, it would be rated as a V90 card).

Below are Sabrent’s exact claims:

For those who need an explanation of these technical terms, make sure to check out PetaPixel’s complete guide to memory cards.

Even if the card is only capable of 60 MB/s, that is still an improvement over other high-capacity SD cards on the market of which only one is able to match it: Angelbird. While Delkin, SanDisk, PNY, and Lexar all produce SD cards with a 1TB capacity, they cap out at V30 speeds. While probably fine for photography, V30 isn’t enough for high-resolution video capture in 8K or, often, even 4K as the data rates tend to exceed the write speed of the cards, especially with newer mirrorless cameras that write with higher bitrates.

While many photographers shudder at the thought of depending on a single high-capacity memory card over a set of smaller capacity cards in order to mitigate issues of card failure, video shooters don’t necessarily have that luxury. 4K and 8K workflows fill cards extremely quickly, and the latter especially is challenging to work in with anything less than 512GB cards. For them, 1TB cards fit the bill.

While Angelbird was previously the only game in town, Sabrent’s entry makes a compelling argument for itself. Not only does Sabrent promise a slightly faster read speed (270 MB/s to Angelbird’s 260 MB/s), but the card is also $30 cheaper at $270. The new 1TB V60 SD card is available immediately, although it appears stock is limited. The cards are protected by Sabrent’s three-year warranty.