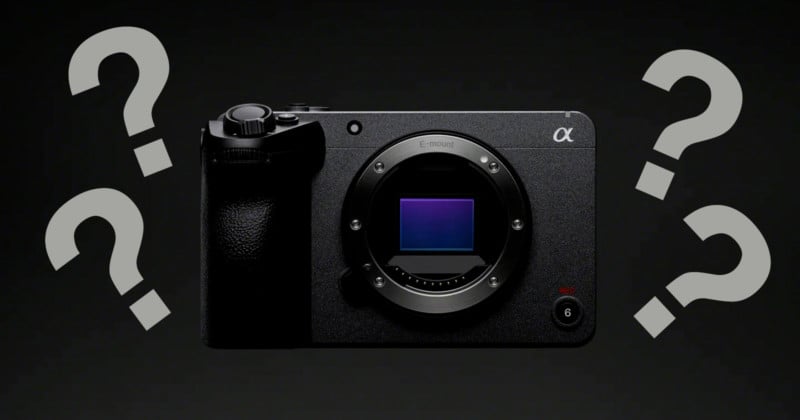 Last week, Sony announced a new camera, and looking at the marketing videos the company produced contrasted against the target user I was told it was for, I found myself quite confused.

You see, Sony briefed us and many other journalists and YouTubers on the FX30 in the days leading up to its official announcement. During that discussion, Sony positioned it as an entry-level camera designed to streamline production for single-shooter projects. Basically, it took the good stuff about the FX3 and made it more approachable. That was, at least, the goal we were told.

Sony spoke of this target user who liked making videos already but wanted to start making content that was more akin to major productions, but didn’t know how. So they would need a camera that could shoot in certain qualities and offer certain physical features, but they also either don’t know how to color grade or didn’t want to make the time for that step.

Sure, I think I can imagine this user. It makes sense. That was, until I saw the content Sony produced to market the camera:

Excuse me, but how is this video anything like the target market I was told this camera was for? This looks basically the same as the promotional content made for the Sony FX3 or even the Venice, both of which are cameras designed for professionals.

Except is that who the FX3 is for? That’s what I was told, but then I look at one of the videos Sony has made for the FX3 and suddenly I’m not so sure. I mean, the video below appears to have been made by a single operator and editor, right?

I feel like these promotional videos got mixed up. For the FX3, Sony probably wanted to make sure more people realized that it could be easy to use, so they showed it in an approachable way despite loading it with features that serve a high-end creator. With the FX30, Sony went the opposite direction and probably got scared that it would appear too low-end, so they made a video to prove it could be used on a big set.

In short, the company second-guessed itself.

Sony does this with relative frequency. Not every time of course (we didn’t see a pro-level video shot with the vlogging camera ZV-E10, gratefully), but it happens enough.

I feel like sometimes, the company gets spooked on whether or not a product is going to sell well enough and tries to expand that possible audience at the last minute in order to compensate, which doesn’t actually help since the original messaging is never altered, leading to this confusing mishmash of ideas at launch.

Sony will often start out with this one idea of a customer that a product should appeal to, then spends the entire launch window muddying it up with either really low end use cases of high end gear, or high end use cases of what is supposed to be lower end gear.

By the time a camera can be purchased, it’s really unclear how it is supposed to solve the problems that were originally outlined.

Let’s say for a moment that I am that user for the FX30 that Sony originally targeted. I log on the morning of the announcement, read the news, and then watch that video. After seeing the production level, I come to the conclusion that the FX30 isn’t for me. I don’t have a team or that level of lighting knowledge. Remember, this user Sony originally designed the FX30 for doesn’t even know how to color grade.

Some of you may argue that Sony doing this is not really any different than when Apple does it, and Apple does it a lot. In recent years, Apple has been producing extremely high-end cinema productions that they shoot on an iPhone in order to convince us that it’s a pro-level product. The difference there is, everyone with an iPhone knows it’s a smartphone, not a cinema camera. Apple making a commercial showing a film team shooting a skydiver from a helicopter doesn’t suddenly make me believe that is what I should shoot a similar scene with, should that ever become an option.

iPhones are designed to be immediately usable to all skill levels from the second the camera app is turned on. Dedicated cameras, everything from the ZV-E10 through the FX3, are immediately more complicated. When a user might not be able to tell you their actual skill level or capability, it makes messaging and product positioning all the more important.

Sony, if you’re making a camera for the everyday creator, don’t muddy up the messaging. Trust your original plan. Further, don’t feel like every camera you make needs to appeal to everyone. You’re the elephant in the room, your messaging doesn’t need to be this indecisive to convince people to buy your cameras.