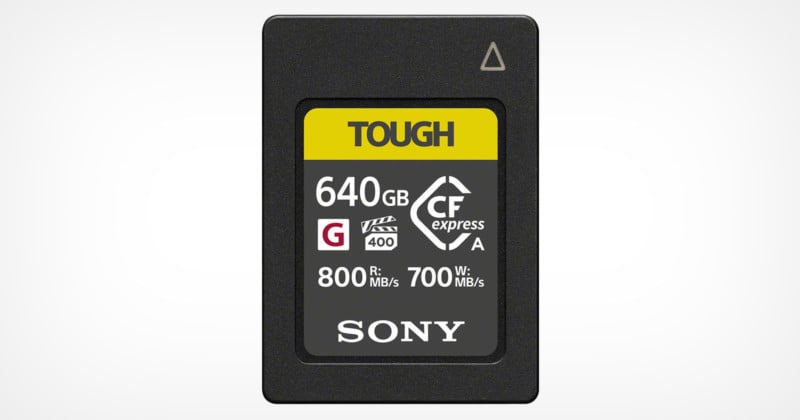 Lost in the shuffle of yesterday’s FX30 camera announcement was the coming availability of a 640GB capacity CFexpress Type A card, the largest capacity from any manufacturer yet.

Spotted by Sony Alpha Rumors, the new card will start shipping in early December and will cost a whopping .

CFexpress Type A cards are a lot less common than the larger Type B cards and don’t currently have nearly as high of max capacities either. While 640GB is a lot more than the 160GB that ProGrade Digital maxes out and is double the 320GB that Lexar offers, these capacities are still significantly lower than the max options offered by CFexpress Type B cards which have exceeded a terabyte.

Still, 640GB is a lot closer to the 512GB capacities that photographers have likely gotten used to with SD cards and will be a lot more forgiving than the paltry 160GB capacities that have been widely available for some time now.

It hasn’t been explicitly stated to PetaPixel why CFexpress Type A cards have been lagging when it comes to their overall capacity, it might have to do with their small size. Despite the fact they are about the size of an SD card, they are less than half the size of the larger CFexpress Type B card.

While capacity options are extremely limited, CFexpress Type A cards have a distinct advantage over CFexpress Type B cards that Sony has been using to its full potential: shared slots with an SD card. Sony’s more recent cameras, including the new FX30, have two card slots that can accommodate either a CFexpress Type A card or an SD card, leaving more choices open to photographers and filmmakers. Cameras from Canon and Nikon usually use a single CFexpress Type B card along with a dedicated SD card slot, which does provide the capability for high speed data transfer out of one, but photographers can’t get the same peak performance out of both like they could with Sony’s configuration.

CFexpress Type A cards have been historically rarer, but more manufacturers have been producing them in the last year. ProGrade Digital started making the cards last December and Lexar got into the game this past spring as did Delkin, which at least provides a few alternative options that might eventually result in lower prices. That hasn’t started yet though, unfortunately, since Sony’s new card still costs $1,250.