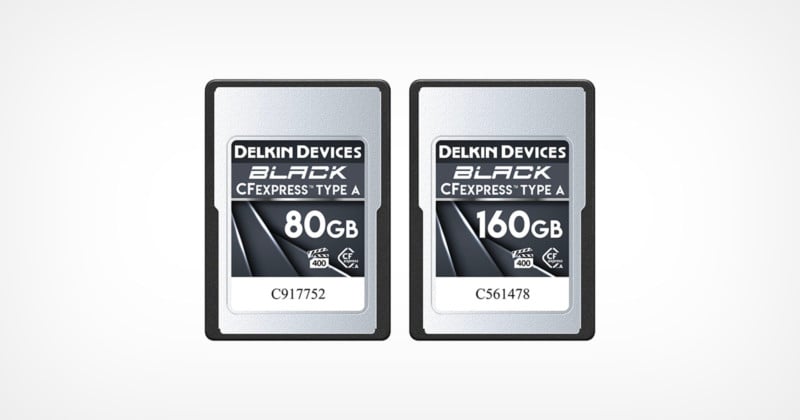 Delkin Devices has announced that it will release a series of CFexpress Type A cards, making it the third manufacturer to support the format following Sony and ProGrade Digital.

The new CFexpress Type A cards are part of Deklin’s Black series, which it says combines industrial strength and reliability with high performance and a quality guarantee. The cards promise to match the current professional level demand of the format and are able to support 4K, 6K, and 8K video recording.

Delkin’s CFexpress Type A memory cards boast recording speeds of up to 790 MB/s for cinema-quality video capture, including UHD 8K at 30 frames per second (400 Mbps) in the Sony Alpha 1. They also support RAW continuous-burst shooting. The cards are slated to offload data at up to 880 MB/s as well. This 880 MB/s read speed and 790 MB/s write speed promise exceeds the transfer speeds of ProGrade and Sony CFexpress Type A cards. Both companies list the cap of their CFexpress cards at 800 MB/s read speeds and 700 MB/s write speeds. It’s not clear how Delkin is able to promise faster transfer rates since a comparison between ProGrade and Sony’s cards revealed very little separated them as far as performance is concerned, and both use the latest CFexpress Type A specification (PCIe Gen 3).

Compatible with a Range of Sony Cameras

Delkin says that its new CFexpress cards have undergone “extensive testing” to assure full functionality with the cameras that use the format. Delkin specifically notes approved compatibility with the Sony Alpha 1, Alpha 7 IV, Alpha 7S III, FX3, and FX6 cameras.

Delkin puts a lot of stock in what it calls the “48HR Replacement Guarantee.” Cards with the “48HR” text on them come with a promise that in addition to the company’s lifetime warranty, it will replace any non-working card within 48 business hours or less prior to receiving the non-working card. The company also says that the card can be exchanged in person at any authorized Delkin reseller.

Delkin will offer its new CFexpress Type A cards in both 80GB and 160GB configurations, currently the most common capacities available. It did not provide any indication of when the cards would be available or for how much they would cost, however. That said, Adorama will stock the cards when they are released.

As a pricing reference, Sony currently offers its 160GB CFexpress Type A card for $398, while ProGrade Digital charges $365.

Update 2/10/22: Delkin has informed PetaPixel that there will be two lines of CFexpress Type A cards, the “Black” and “Power” series. The Black series will include the 48-hour replacement guarantee and are serialized for “guaranteed quality,” while the Power series has a standard warranty and no serialization.

Despite the difference, Delkin tells PetaPixel that the price at launch for each series will be the same: The CFexpress Type A 80GB and 160GB cards will retail for $230 and $400 — about in line with Sony’s pricing. That identical pricing isn’t expected to last forever, though, and expect the Power line to be seen available for less. Delkin also says that the Black cards won’t be offered through places like Amazon, which helps them maintain their premium level.

Delkin will also be selling a CFexpress Type A and SD memory card combination reader for $100.

The cards and memory card reader are expected to arrive at dealers next week.