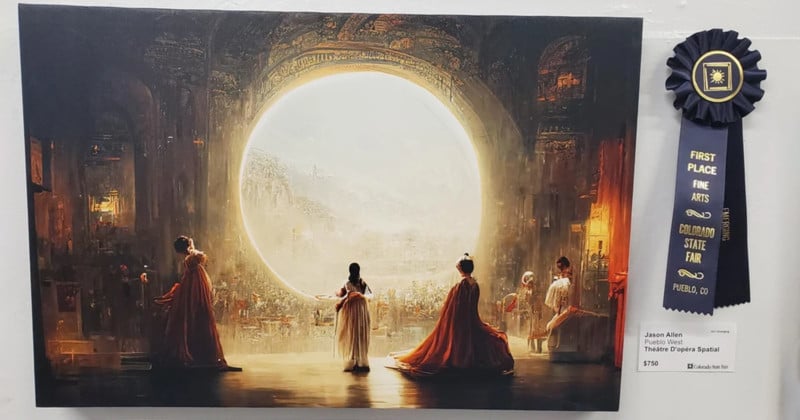 A man who won a fine art competition using an image he created with an artificially intelligent (AI) text-to-image generator has shown no remorse about his triumph despite criticism.

According to Vice, Jason Allen posted a photo of his image hanging on a wall with a first place ribbon next that he had received from the Colorado State Fair fine art competition.

Posting under the alias Sincarnate on Discord, Allen said he had an “exciting announcement” about his personal project that he made on AI-image generator Midjourney.

“I have been exploring a special prompt that I will be publishing at a later date, I have created hundreds of images using it, and after many weeks of fine-tuning and curating my generations, I chose my top three and had them printed on canvas,” he writes.

Allen states clearly that he wanted to use Midjourney in a competitive matter and said “[I] could not be more excited about having won with my favorite piece: Theatre d’Opera Spatial.”

His work, Theatre d’Opera Spatial, is a stunning piece of atmospheric art that looks like a high court from another world. Midjourney is known for its darker, moody images it generates, rather than the cleaner styles of DALL-E 2 and Stable Diffusion.

Not Everyone is Impressed

Despite Allen’s delight in winning the contest, commentators online have been quick to call his actions out.

TL;DR — Someone entered an art competition with an AI-generated piece and won the first prize.

“Someone entered an art competition with an AI-generated piece and won the first prize. Yeah that’s pretty f****** s*****,” writes one viral Tweet.

“We’re watching the death of artistry unfold right before our eyes — if creative jobs aren’t safe from machines, then even high-skilled jobs are in danger of becoming obsolete,” adds another.

Allen acknowledged the controversy admitting that he knew it would not go down well. But far from apologizing, he doubled down on his actions.

“How interesting is it to see how all these people on Twitter who are against AI-generated art are the first ones to throw the human under the bus by discrediting the human element! Does this seem hypocritical to you guys?” He wrote on his Discord.

Allen says that critics are judging the art by the method of its creation and that eventually AI-created art will be accepted.

“What if we looked at it from the other extreme, what if an artist made a wildly difficult and complicated series of restraints in order to create a piece, say, they made their art while hanging upside-down and being whipped while painting,” he says.

“Should this artist’s work be evaluated differently than another artist that created the same piece ‘normally’? I know what will become of this in the end, they are simply going to create an ‘artificial intelligence art’ category I imagine for things like this.”

Allen’s win and subsequent controversy has only emboldened him. “I’m not stopping now,” he says.